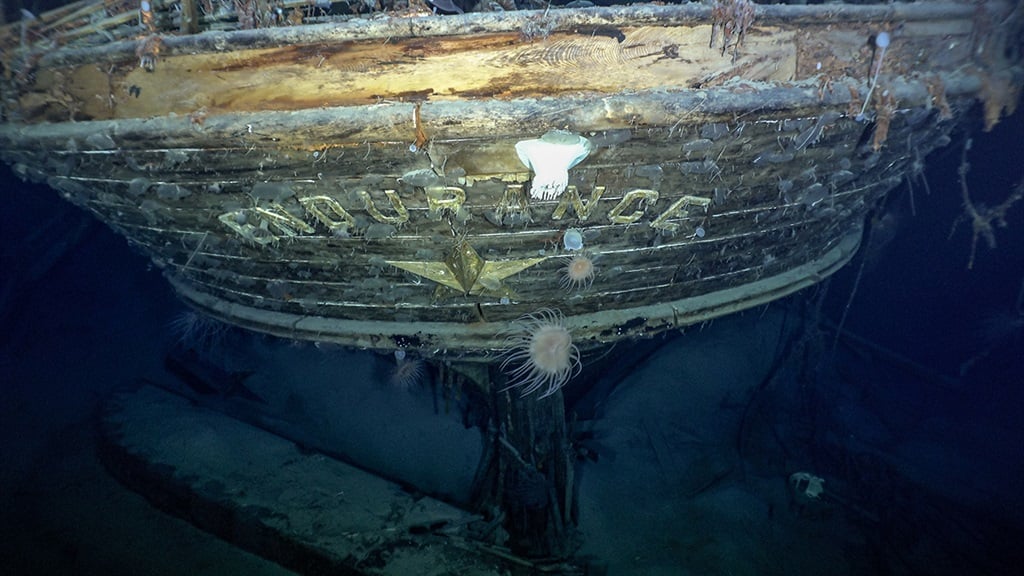 The stern of the Endurance with the name and emblematic polestar (Image: Falklands Maritime Heritage Trust and National Geographic)

The expedition team aboard South Africa’s polar research vessel, the SA Agulhas II, has discovered the wreck of a ship that sunk to the bottom of Antarctica’s Weddell Sea.

The SA Agulhas II departed Cape Town harbour 33 days ago, with a team of more than 65 scientists and explorers aboard. The mission: to find the ship of revered polar explorer, Sir Ernest Shackleton, which was crushed by ice during the Imperial Trans-Antarctic expedition in 1915.

The expedition undertaken by Shackleton and his team more than a century ago had hoped to be the first to cross Antarctica via the South Pole. But soon after setting course for the Weddell Sea, Shackleton’s vessel, the Endurance, became bogged down by floating pack ice.

The ship was abandoned and sunk to the bottom of the ocean floor. Shackleton and his team survived, after overcoming seemingly insurmountable odds. The Endurance22 Expedition, making use of the SA Agulhas II, helicopters provided by a South African company, and advanced remote-controlled underwater vehicles, announced on Wednesday that it had found Shackleton’s ship.

"We are overwhelmed by our good fortune in having located and captured images of Endurance," said Mensun Bound, director of exploration on the Endurance22 Expedition.

"This is by far the finest wooden shipwreck I have ever seen. It is upright, well proud of the seabed, intact, and in a brilliant state of preservation. You can even see 'Endurance' arced across the stern, directly below the taffrail. This is a milestone in polar history." The wreck was found roughly 6.5 kilometres south of the position originally recorded by Endurance’s Captain Frank Worsley. Remote-controlled SAAB Sabertooth underwater vehicles detected the wreck at a depth of 3,008 metres in the Weddell Sea.

"This has been the most complex subsea project ever undertaken, with several world records achieved to ensure the safe detection of Endurance," said Nico Vincent, the expedition's subsea project manager.

"SAAB provided the Sabertooth, so I also want to thank them, including their ace team onboard SA Agulhas II, and those who ensured the vehicles performed as well as they did." The expedition, funded by the Falklands Maritime Heritage Trust, also researched the ice drifts, weather conditions of the Weddell Sea, and studies of sea ice thickness.

The Endurance is protected as a Historic Site and Monument under the Antarctic Treaty, which means it may be surveyed and filmed but not touched or disturbed in anyway.