How the world responded to South Africa’s 2019 elections Millions of South Africans headed to the polls on Wednesday in the country’s sixth democratic elections since 1994.

Voting went smoothly at most voting stations, with only sporadic incidences reported of polling stations opening late and shortage of ballot papers.

The final election results are expected to be released by Saturday, but a clear picture of voting outcomes is expected by Thursday.

Also read: This is the election outcome that may trigger a rally in the rand and SA shares

This is how international publications reported on South Africa’s 2019 elections.

The New York Times (US): ‘The vote is partly a referendum on Mr. Ramaphosa’ 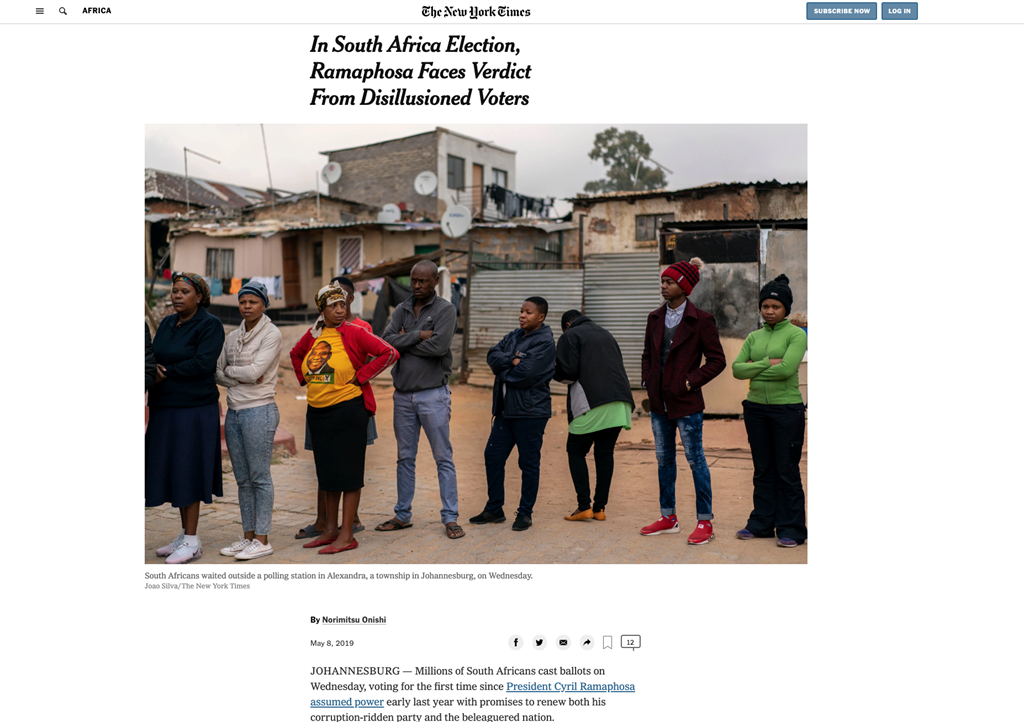 The New York Times reported that 25 years after the end of Apartheid captured the global imagination, President Cyril Ramaphosa and the ANC face an electorate increasingly disillusioned.

“Many of the ANC’s traditional supporters approve of him, polls show. But they question whether he can outflank powerful party rivals and root out the endemic corruption that has come to define the ANC,” it reported.

BBC (UK): ‘Young people queuing to vote have been speaking of their difficulties in finding jobs, with unemployment at 27%’ The British Broadcasting Corporation (BBC) reported that support for the ANC has declined as inequality remain in South Africa.

It reported that people braved cold winter weather and some rain to vote in the most hotly contested polls since the first democratic elections 25 years ago. One of the largest online news publications in Nigeria, Punch, reported that despite corruption allegations, the ANC still polled around 60% in opinion surveys ahead of the election.

But, it said, the election will be a test whether Ramaphosa can reverse growing dissatisfaction among South African voters with the ruling party.

BuzzFeed news (US): ‘South Africa Has An Anti-Immigration Problem, And It Looks A Lot Like America's’ BuzzFeed News, with millions of readers worldwide, reported that populist and nationalist rhetoric was put forward by South African leaders, in a fashion reminiscent of the campaign by US president Donald Trump, in the lead up to the elections.

“African nationals living in South Africa — whether as undocumented migrants, asylum-seekers, refugees, or citizens — have long struggled for full inclusion in society. But advocates say that their situation has worsened as elections approach,” BuzzFeed News said. Qatari-based Al Jazeera reported the election is expected to be won by the ANC, but that the ANC is hoping to turn around massive losses since its reputation has been damaged over the past 10 years by a stream of scandals under former President Jacob Zuma. The Telegraph reported that the EFF will likely be the party that grows the most in the South African elections. Julius Malema, it said, frequently indulges in race-baiting rhetoric, once declaring that “we are not calling for the slaughtering of white people — at least for now”.

The Telegraph reported that while it is highly unlikely that the EFF becomes a ruling party, it will have a heavy influence in South African politics and possibly sway the ANC towards populism.

CNN (US): ‘If anything, the rainbow nation is even more divided now than it was in 1994’ Global news network CNN reported that despite the ANC’s ability to dismantle Apartheid, South Africa remains the most unequal country on earth.

The Guardian (UK): ‘Many South Africans have been alienated by repeated corruption scandals’ One of the largest news publications in the United Kingdom, The Guardian, reported that South Africans are frustrated by the ANC’s failure to deal with a struggling economy, collapsing public services, soaring unemployment and high levels of violent crime.

“There is also rising anger at the party’s failure to hold its officials to account after graft investigations.”

It noted that polls place the ANC at 56% which is down from the 62% it received in the previous national elections.

Related Links
This is the largest - and smallest - polling station in the 2019 South African elections
Here's how house prices reacted to previous South African elections - and what you can expect...
This is the election outcome that may trigger a rally in the rand and SA shares
Next on Business Insider
The EU has a Russian gold ban in its sights as it hammers out its next round of sanctions – report