Given Ngwamba is a qualified sound engineer who, for several years, struggled to find a job. Then he started making charcoal – which has now found its way on to the shelves of his local Pick n Pay.

After completing his studies at the National Electronic Media Institute of South Africa and finally becoming a qualified sound engineer in 2006, Ngwamba struggled to find a related job.

To keep food on the table, Ngwamba worked at a college radio station and tried to get a job at the SABC, without success.

In 2016, the entrepreneur decided to launch his own online radio station, but it was unsuccessful.

"That's when I started scratching my head trying to figure out what's next for me.

"One day I was at the back of my house and thought maybe let me try charcoal. I had seen some people buy it and I thought maybe I could get into the business."

Although the business of making charcoal is nothing new in Naas, a small township in Mpumalanga, Ngwamba knew he wanted to make something different: effective, yet environmentally friendly.

"I discovered that the old way of making charcoal, of going to the forest and cutting down trees, is harmful to the environment and it is not sustainable," he said. 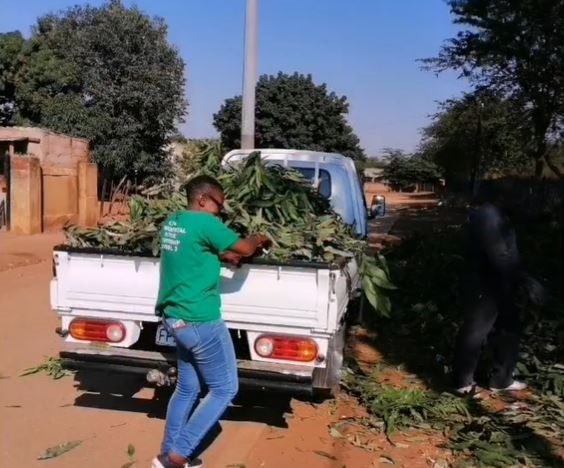 While doing his research, Ngwamba discovered that one can make charcoal out of agricultural waste such as sugarcane, coconut, waste from mango trees, and banana trees. "I saw that this is something sustainable and it's the future," said Ngwamba. "It solves the problem of deforestation and doesn't add to carbon emission and climate change."

The 35-year-old is based in a small township where residents rely on charcoal to cook during power cuts.

Ngwamba made doughnut-shaped charcoal that produces lighter smoke compared to regular charcoal from wood – and it catches fire faster, he said. Both locals and big businesses loved it.

"Whenever there are power cuts, people come to my house to buy," said Ngwambe.

In addition to neighbours placing orders, the small business now supplies to the local Pick n Pay and is currently in talks with the another local outlet of a national chain. The price for one bag is R35 for retailers and R40 for individuals buying directly from him.

Although the product has been noticed, Ngwamba says making the charcoal came with its own challenges.

With no transport to collect the waste at nearby farms back then, getting the material was a mission.

"I used to use my wheelbarrow to collect the mango trees after people cleaned them, I'd get home and continue to work," he said.

Lack of finance also meant that Ngwamba had to make his own equipment from scratch. "I'd just buy steel and ask the welding guy to make what I designed," he said.

Getting people to buy his new charcoal was a mission on its own, since they had been used to the old charcoal from trees – but he now has a loyal customer base.

According to Ngawmba, the process of making charcoal from agricultural waste is not long, but a continuous job for him and four team mates.

"In one week we do carbonisation, like converting the waste. In the second week, we do the final processing of the charcoal making them into the donut shaped briquette," he said.

He says the company can easily make 200kg of charcoal dust in a day when using about five big drums. "It's mostly about carbonising and briquetting," he said. Currently, they still use Ngwamba's backyard and an empty piece of land to produce the charcoal and hope to build a warehouse soon.