The best details from the new 'Solo: A Star Wars Story' trailer, from Donald Glover to a sarcastic new droid A new full-length trailer for "Solo: A Star Wars Story" dropped Sunday night, and it features plenty of new footage.

The trailer shows more of Alden Ehrenreich as the title character, a young Han Solo — a character made famous in the original "Star Wars" trilogy by Harrison Ford.

It also gives us more of Donald Glover as Lando Calrissian (who steals the show), and a better glimpse at the worlds and action audiences will witness during the movie (the Kessel Run, perhaps?). Also, there's probably a love interest for Chewbacca.

We've broken down the new trailer and highlighted its best moments and the questions it raises, from a sarcastic new droid to a look at Paul Bettany's villain.

"Solo" comes to theaters next month after a troubled production. Original directors Phil Lord and Chris Miller were fired over creative differences and replaced by veteran director Ron Howard, who, according to an actor in the film, made filming run a lot smoother.

Despite the obstacles, "Solo" not only kept its May 25 release date, but it's premiering at the Cannes Film Festival on May 15.

Below is our breakdown of the new "Solo: A Star Wars Story" trailer:

It looks like Han Solo's shooting skills are going to be put to the test in this scene early in the trailer (and maybe early in the movie, since it doesn't look like any of other characters are with him yet). The trailer alludes to the idea that Han might be after these guys for revenge. Revenge for what?

Any time Donald Glover shows up is worth mentioning.

We can already tell that Donald Glover — who plays a young Lando Calrissian — is going to be a highlight in "Solo," and might even overshadow the title character. Glover steals the show in this new trailer.

"Or is it something else?" "You're after something. Is it revenge? Money? Or is it something else?" Emilia Clarke's character Qi'ra asks Han, and the voiceover for that last part is during this shot of Han and Chewbacca staring up at the Millennium Falcon. It's a nice signal that Han may be a smuggler, but in his heart, he's in it for the adventure more than vengeance or money.

Paul Bettany is a bad guy. After the original directors Phil Lord and Chris Miller were fired and Ron Howard took over, Michael K. Williams could not return to the movie for reshoots due to other commitments. So, Paul Bettany was cast to replace him as crime lord Dryden Vos, which was originally going to be an alien character played by Williams. Bettany is starring in another Disney blockbuster before "Solo" comes to theaters: "Avengers: Infinity War" as the android Vision. Little is known about Newton's character Val in the movie and she hasn't been featured much in the trailers. Hopefully we will get plenty of her in the movie because it would be a shame if Newton's talents were wasted.

"The best smuggler around." Donald Glover was perfect casting for Lando, and he seems to be settling into the character well from what we can gather from the trailers. "Everything you've heard about me is true," he says to Han. The new "Star Wars" movies really play on the nostalgia of the original trilogy, especially with the Millennium Falcon. That will probably be the case in "Solo" — in this shot, Han seems to be boarding the ship for the first time, which is in Lando's possession in this movie. We can only assume that the ship will become Han's during the movie, and maybe Lando will lose it in a betting game similar to what we see earlier in the trailer.

"You're in this life for good." Woody Harrelson plays Tobias, Han's mentor who throws him into a life of smuggling. This moment in the trailer foreshadows Han's future — as we all know, Han is introduced as a smuggler in "A New Hope" who helps Luke Skywalker and Obi-Wan Kenobi.

This train battle is going to be insane. This train battle was featured in the Superbowl TV spot, and again in this trailer. We can only assume that it will be one of the stand-out action sequences of the movie.

"Star Wars" fans will know that Han likes to gloat about the famous Kessel Run that he says he completed in a record 12 parsecs. The Kessel Run is a dangerous smuggling route, and based on this image at starwars.com, this might be the planet Kessel. It would be a shock if the movie didn't show this moment.

"Everyone will betray you." Woody Harrelson's Tobias warns Han to trust no one because everyone will betray him. His voiceover is over this shot of Emilia Clarke's Qi'ra looking quite menacing, so will she betray Han? It looks like this shot of Glover as Lando might be in the same scene as the previous shot with Clarke's Qi'ra, so maybe Glover has realized her possible betrayal. Then again, the trailer could be intentionally misleading. Chewbacca is shown with what is most likely a love interest.

"I've got a really good feeling about this." 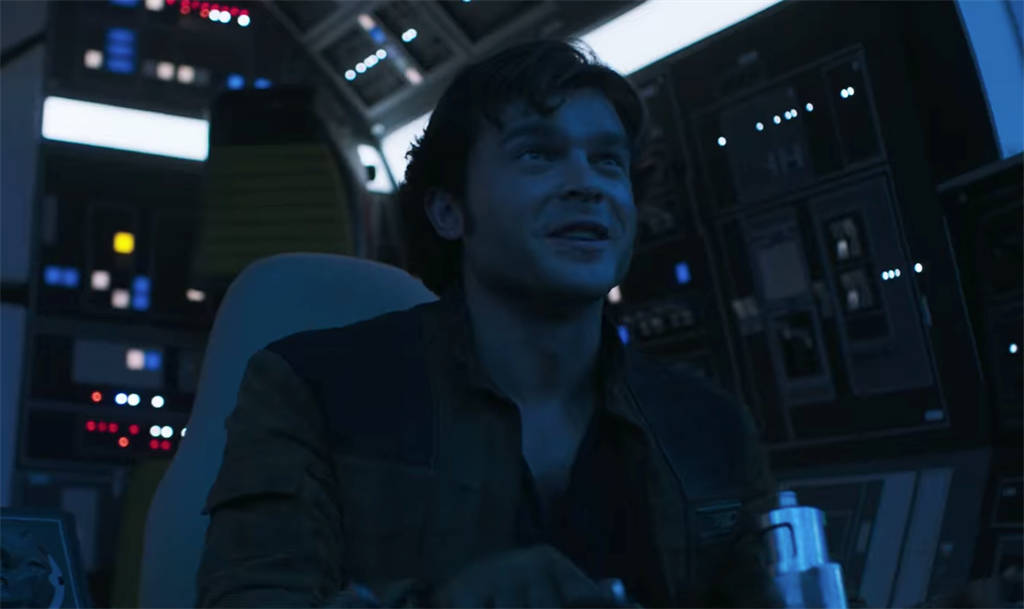 One of the recurring lines in the "Star Wars" movies is, "I've got a bad feeling about this," so it's funny when Han says this in the trailer. It also highlights his young, adventurous personality. It's not all Wookiee love for Chewbacca, who picks up and slams someone into the ground at one point in the trailer, which begs the question of why he's so mad. "Star Wars" movies have their cute droids, like R2-D2 and BB-8, but they also have their sarcastic ones like K-2SO from "Rogue One: A Star Wars Story." If this trailer is any indication, the droid in "Solo" — a companion of Lando named L3-37 — will be more like the latter ("So glad we took this job," it yells sarcastically).

Watch the full trailer below: