The exterior of the black and white colonial house. The house is built using dark timber beams with whitewashed walls, hence the color.
Amanda Goh/Insider

With their dark timber beams and whitewashed walls, Singapore's black-and-white colonial bungalows are an iconic part of the city-state's heritage. Today, however, only 500 of these homes are still standing. The exterior of a black-and-white colonial house.
Amanda Goh/Insider

British officials and military personnel built the houses for residential use between 1903 and 1928 when Singapore was still a colony. Today, many of these houses can be found in prime neighborhoods or close to areas where the British had air and naval bases.

When the British administration left the island, they sold the bungalows to the Singapore government. While the government conserved many of the houses, others were demolished to make way for the city's development.

Today, an estimated 500 of these colonial bungalows are left. The Singapore Land Authority (SLA) preserves and manages them, leasing them out for commercial and residential uses.

The design of the houses is heavily influenced by the Tudorbethan architectural style, with steep roofs, high ceilings, and exposed timber frames. In the first floor of the house, tiles help keep the house cool in the tropical weather. On the second story, the floor is made of wood.

Elizabeth Hay moved to Singapore from the UK in 2013 with her then-fiancé, Tim. The two of them — now married with three children — have been living in a black-and-white colonial bungalow since 2015. The couple wanted to build their family in a bigger home.
Alecia Neo/Neon Studio

Elizabeth is an interior designer, and Tim works in investment management. The couple lived in a heritage shophouse in a neighborhood called Emerald Hill before moving to their current home.

They decided to move when Hay was expecting their first child.

"We wanted to move to something with a similar old feel, but with a bit more space," Hay told Insider. "So for us, a black and white bungalow was perfect."

After viewing several houses, the couple fell in love with their current home. 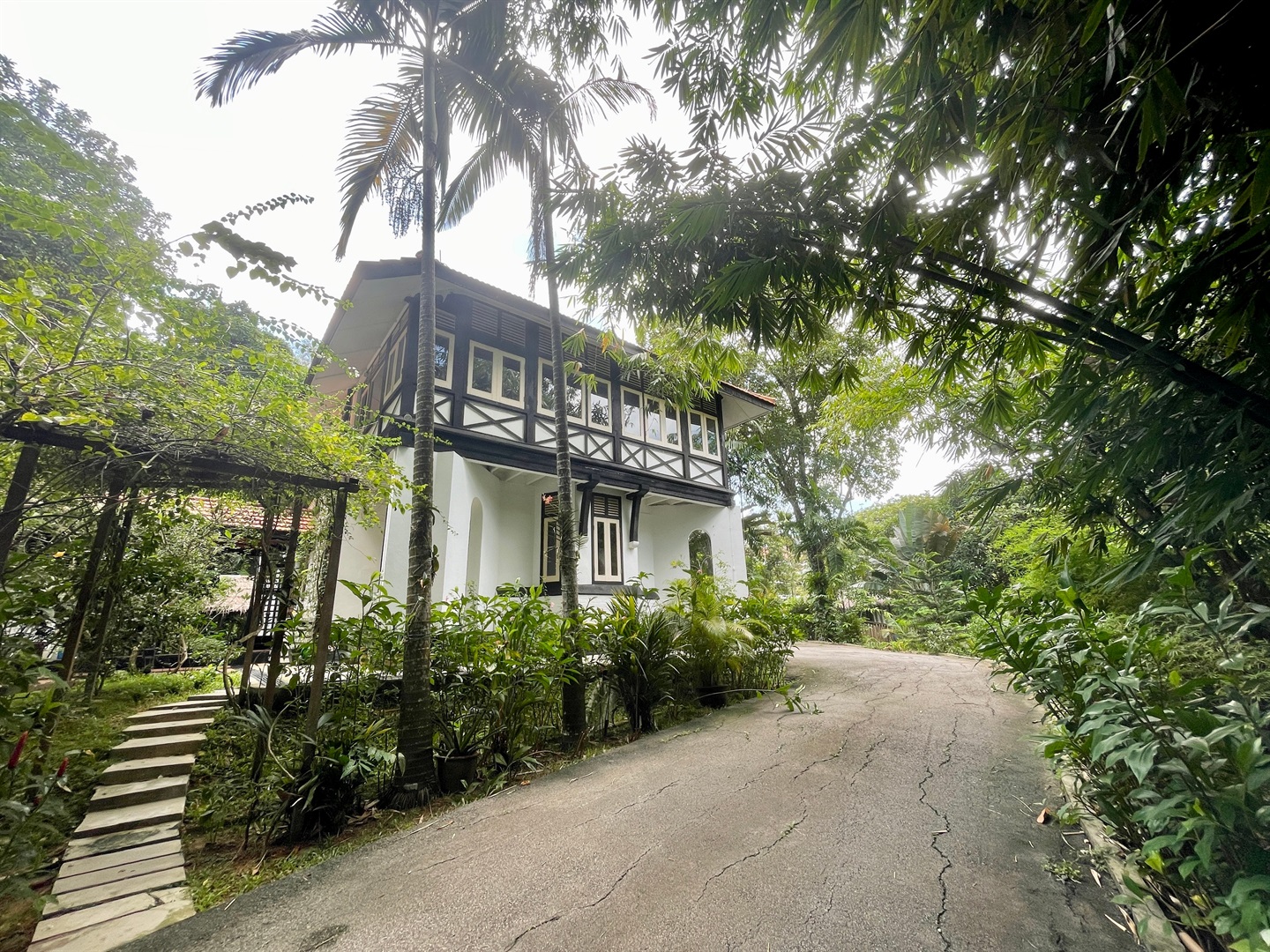 There is a driveway leading up to the main house from the gate. Numerous plants and trees surround the house.
Amanda Goh/Insider

The 6,000-square-foot bungalow is located halfway up Mount Faber, a big hill about 10 minutes from Singapore's Central Business District (CBD).

"We felt we had the best of both worlds here. It's so close to the CBD — it's 10 minutes down the road. But we are also near Mount Faber Park, near all this greenery," Hay said.

Those interested in living in a black-and-white bungalow must submit a bid to the SLA. This amount, if accepted, becomes their monthly rent. Thankfully for Hay and her husband, they were the only ones interested in the house and ended up winning the bid. She declined to share how much they pay in rent.

Not everyone is as lucky as Hay: The bidding process depends on market demand. Hay said houses in prime locations are sometimes only available via sealed bids in which bidders don't know how much others are offering.

"It's a bit tricky," she said. "I've had friends who bid quite high because they really wanted the house, but then they found out that the other bid was, say, $4,000 (around R63,070) below them. But they still have to pay the price they bid per month."

Although the amount fluctuates based on demand, monthly rent for a black-and-white bungalow can reach as high as $20,000 (R315,352) Singapore dollars (R225,480), Lester Chen, a property agent with Singapore Realtors Inc, told Insider.

The SLA did not immediately respond to Insider's request for comment.

But it wasn't a turnkey experience by any means: The bungalow had sat empty for two years before they moved in. The house was completely empty when they first moved in.
Elizabeth Hay

"The garden was a complete jungle," Hay said. "It was really run-down; piles of leaves in the corner of the inside rooms. No air-con, no water heaters, nothing like that. No white goods. It was a complete blank canvas."

While the government takes ownership of conserving the house, it is only responsible for re-staining the wooden floors and painting the facade. The house was a complete blank canvas. It came with no white goods and no air-conditioning system.
Elizabeth Hay

"While the government does the basics, everything else we had to put in ourselves. Things like air-conditioning, water heaters, it's all your responsibility," Hay said.

As Hay was due to give birth around the time they were supposed to move in, the renovation process was rushed. Her priority was to create a livable space with essential amenities.

"All of the soft furnishings, the painting, and the wallpaper, all that really evolved over time because I was having a baby," she said. "I just wanted to get in first and then I did everything else when I had more time." The main living room is on the first floor.
Amanda Goh/Insider

Since the house was unfurnished, Hay had free rein to decorate it as she pleased. Hay and her husband have filled their house with antiques, mementos, and posters they've collected over the years. They decorated the dining room walls, pictured above, with rows of Japanese woodblock prints.

"I would say that my interior design style is classic yet modern," Hay said. "Whenever I travel, I collect antique textiles, which is one of my passions, and other knick-knacks and art from all around the world."

The house's interior design has evolved over time because they're always changing things up, she added.

The wet kitchen is outside the main house, in a smaller adjoining building where the laundry room is also located. The wet kitchen is detached from the main house and has a small dining table.
Amanda Goh/Insider

"Traditionally, you would have a separate kitchen to reduce the dangers of having a fire that burns down the whole house," Hay said.

During the renovation process, the bathrooms required the most extensive overhauls. The bathrooms required the most extensive renovation works.
Elizabeth Hay

"They hadn't been touched, I think, since the seventies. I had to hack them out and then just completely re-tile them, and also add new sanitary wares," Hay said.

The bathroom on the first floor now has framed botanical prints and turquoise wall tiles. The bathroom on the first floor has framed botanical prints and turquoise wall tiles.
Amanda Goh/Insider

On the second floor of the home, the spacious common area doubles as a second living room and a playroom for the kids. The living area on the second floor has windows that go along its length, offering views of the lush greenery outside.
Amanda Goh/Insider

The best part of the space is the natural light, Hay said. The wall facing the front of the house is lined with windows.

In addition to the common area, there are four bedrooms on the second floor: the master bedroom, a guest suite, and her children's rooms.

"Originally, there were only three bedrooms. Two on one side and then another one at the end, which was absolutely enormous. We turned it into two bedrooms instead," Hay said.

Before adding the partition to split the room into two, the couple needed to get approval from the SLA.

"I think as long as they feel it makes sense and it's enhancing the property, they're okay with it," she said.

The master bedroom features a pastel blue color palette. Like the common area, it has a window-lined wall. 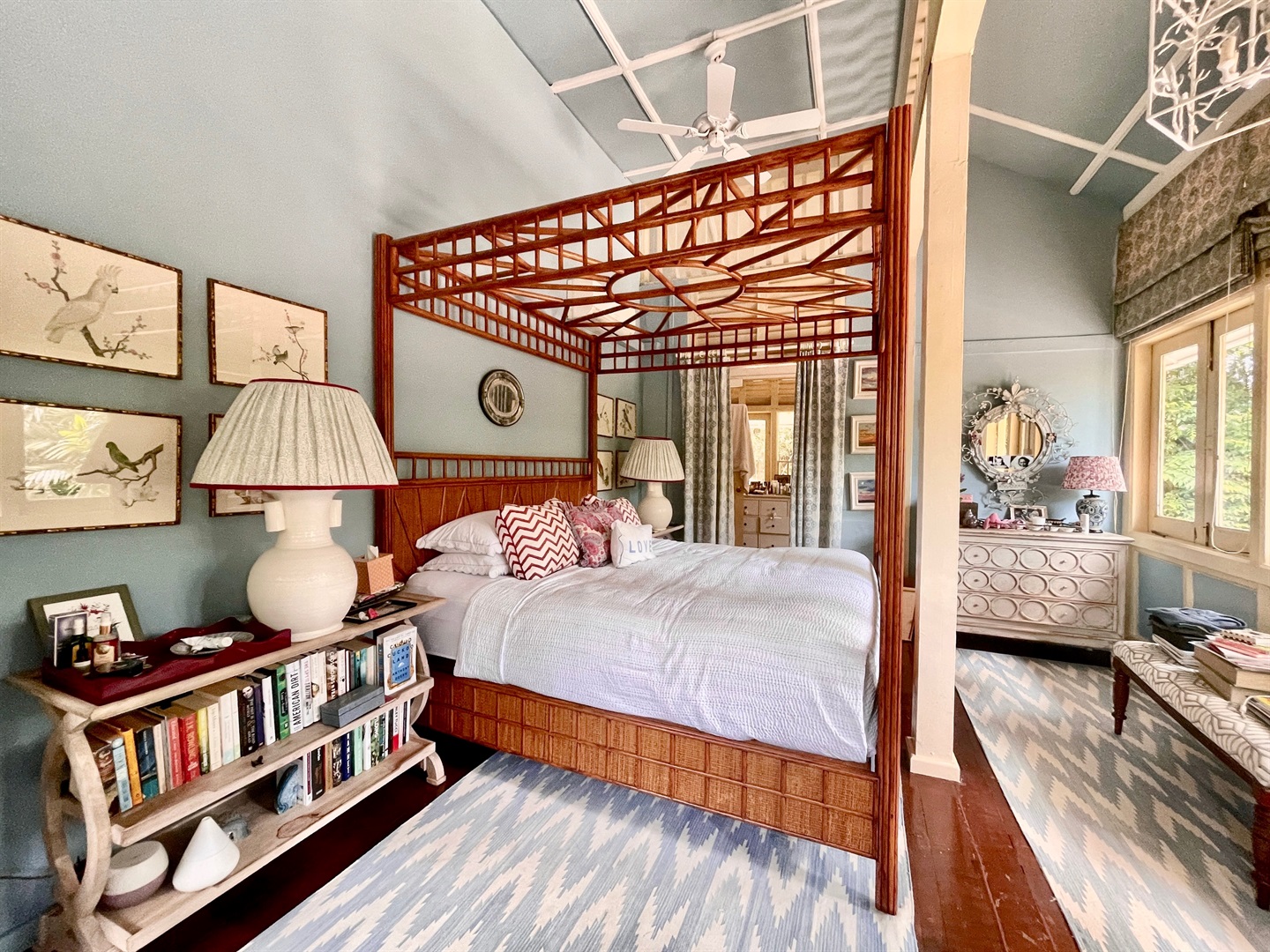 The master bedroom has a blue color scheme.
Amanda Goh/Insider

A bathroom and a small walk-in wardrobe are connected to the master bedroom.

Besides the main living room on the first floor, Hay said this is her favorite room.

The furniture in the house is a mix of vintage and custom-made pieces from local workshops. The guest bedroom. All the bedrooms have a distinctive color scheme.
Amanda Goh/Insider

"I have a few different workshops, whether it's the metal workshop or the bamboo workshop or the carpenters. I design the furniture I want and then have them make it for me," Hay said. Her youngest child, George, has a separate nursery.

In the backyard is a traditional attap shelter, which serves as an outdoor gathering spot for the family on the weekends. The traditional attap shelter in the backyard.
Amanda Goh/Insider

An attap house is a form of traditional housing commonly found in Asia. It features a thatched roof made from attap leaves.

The structure was handcrafted in Malaysia and shipped over to Singapore, Hay said.

"We were lucky there was already a swimming pool. We just had to re-line it but all the structure was there," Hay said. Hay said the SLA comes by on occasion to check on the house.

"They do occasional termite checks. And they check the trees, the house's structure, things like that. Which, in a climate like Singapore, you do need to do quite regularly because things can just suddenly happen — we've had termites a couple of times," Hay said.

As for the garden, while the government handles the big trees, Hay and her husband have the freedom to grow their garden however they like.

"We've done a lot of gardening work. We've got some vegetable patches and we have our own chickens, too," she added.

There's also a separate building on the property that used to function as a chauffeur's quarters. Hay turned the space into an office. Hay turned the separate chauffeur quarters into an office for her interior design firm.
Amanda Goh/Insider

"This would've originally been the chauffeur's quarters, with a garage and there's a bathroom at the very end," Hay said.

It's now an office where she runs her interior design firm, Elizabeth Hay Design.

A big part of the reason why Hay loves the black-and-white bungalow is because of its rich history. The bungalow sits at the end of a driveway on Mount Faber, a hill located in the southern region of Singapore. People can hike to the top of the hill via a public path next to the house.
Amanda Goh/Insider

"We've had older people and older couples show up at the gate. Some were children here 60 years ago or something. They want to come and see the house and how much it's all changed," Hay said.

The couple plans to continue living in Singapore and has no intention of moving at the moment. With their fourth child on the way, the couple is looking for new ways to furnish the house to accommodate their growing family.

Related Links
First batch of infant formula headed to US from Switzerland
WATCH | The moment a R4.5 million US home on stilts is swept away by the sea
TAKE A LOOK | Parkwood Executive Suites’ main Guest House – What we liked and disliked
Next on Business Insider
British Airways passengers wait days to be reunited with their bags amid Heathrow luggage mountain