Most of us could benefit from doing more yoga, but if you struggle to find the time, desk yoga could be the solution.

While chair yoga (a more accessible, inclusive form of the practice) and stretching at your desk aren't new concepts, desk yoga is currently proving more beneficial than ever, both for body and mind, for the swathes of people around the world who have been working from home.

Chair yoga is usually pitched to seniors, but London-based yoga teacher and founder of  The Yeh Yoga Co. Emily Harding believes it's something we should all be doing, and reframing the practice as "desk yoga" has seen increasing interest from frazzled employees.

Harding has been offering desk yoga for two years, and originally came up with the idea through working with big corporations whose employees felt like they weren't able to fit classic yoga into their day. With desk yoga, you don't need to go anywhere, don't need to change, and don't need much time.

It helps with posture, relieves tension in the neck and shoulders, reduces eye strain which in turn can ease headaches, and helps people feel connected to themselves, calmer, and less anxious by focusing on the breath, according to Harding.

"Yoga isn't just about practicing on a mat in your leggings," she told Insider, adding that she wants to combat the stereotype that "yoga is only for thin, flexible, white women."

"Yoga has been around for thousands of years. It's about freeing yourself from the suffering of your mind which doesn't just pop up when you step on four corners of the mat, it's in your whole life," Harding said.

Harding talked Insider through five easy poses (that only require pulling your chair back from your desk) and how to perform them correctly, whatever your ability, from your home office. "This is a great pose for rectifying the classic bent-over desk posture, and it's a nice one for the hamstrings as well," Harding said. "It's a cross between a puppy pose and a downward dog."

If you have healthy shoulders (and the space), step away from your chair, rest your hands on the back of it, and with a soft bend in the knees, fold forwards, keeping your back straight. You should feel the chest opening.

Breathe into the pose for at least three deep breaths. For a slightly less intense version, sit on the edge of your chair, hold on to the back, roll the shoulders back and down, and puff the chest forward, feeling it opening. Hold for at least three deep breaths. In a normal eagle pose, a lot of balance is required, but the chair version is a lot easier.

Cross your arms over as far as you can, bend at the elbows, bring the palms together, then lift the elbows up and down to create space and find where it feels right for you.

Cross one leg over the other, and if you can, cross that leg at the ankle too.

When in the position, relax your face and breathe into the pose for about three deep breaths.

"Eagle pose is the most incredible pose for all the major joints of the body," Harding said. "It's all about stretching through the shoulder blades." 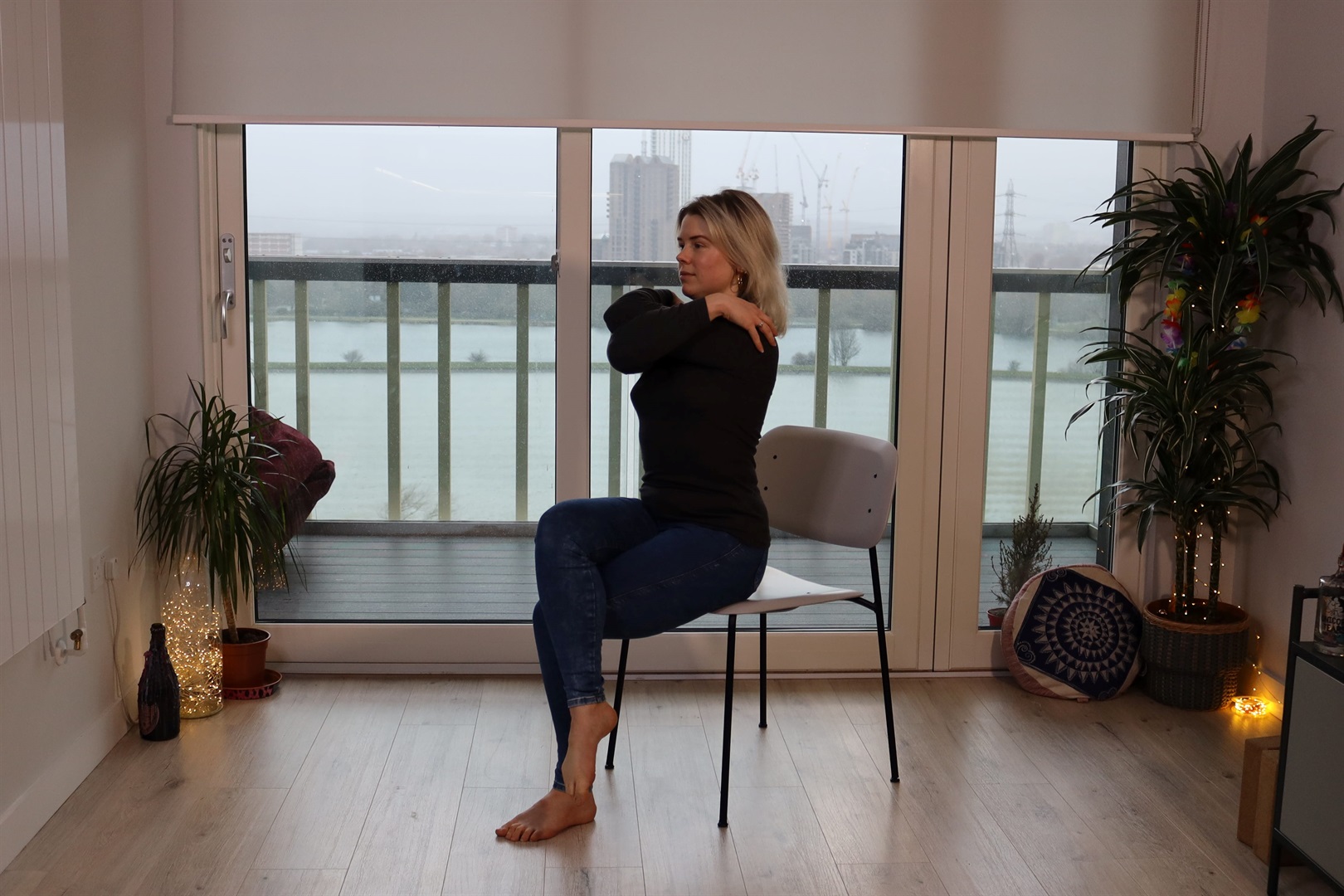 If the previous style of eagle pose isn't available to you, Harding recommends bringing your hands to your shoulders and only crossing the legs once. Again, hold for at least three deep breaths. 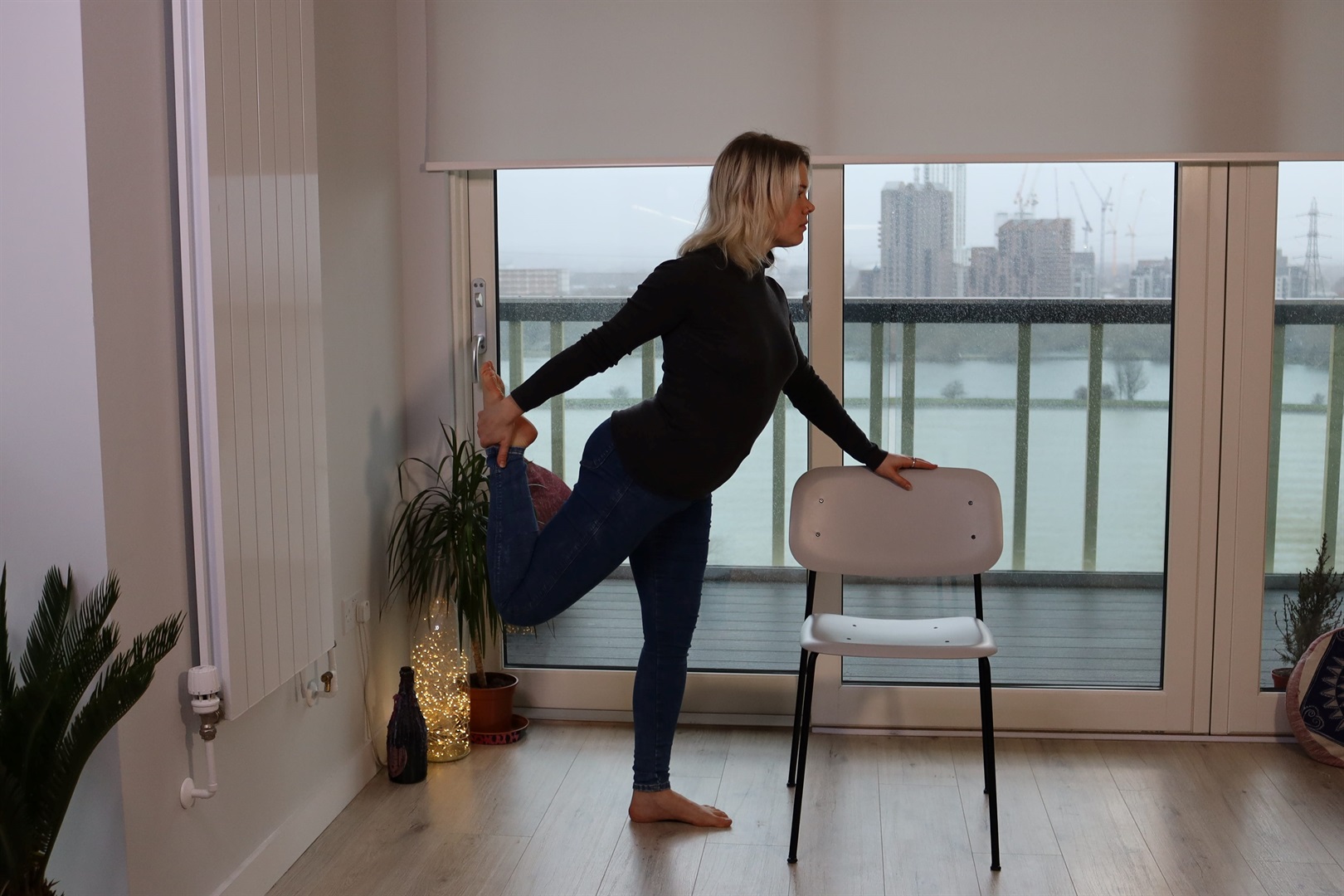 "The hip-flexors are quite hard to get into if you're not on the floor, but I recommend finding a modified version of a dancer pose, depending on people's flexibility," Harding said.

One option is to hold on to the back of the chair then take hold of the outside of the opposite foot with the other hand, bringing the leg back to a position that feels good for you, where you feel the stretch through the hip-flexor and down the quad. Hold for at least three deep breaths. Another option is to sit sideways on your chair, holding on to the back, with one butt-cheek off the chair. Again, take hold of the outside of the foot with your other hand and feel the stretch in the same way.

"Push your lower knee back a bit and you feel the opening in the shoulder too," Harding said.  Breathe into the pose for at least three deep breaths. If holding on to the foot isn't available to you, you can simply rest the foot on the floor and lean back slightly so you feel the stretch. Take at least three deep breaths. This is a great stretch for the glutes, which tend to get lazy and tight when we're sitting all day.

"If you get really tight glutes, it can lead to back pain, it's all interconnected," Harding said.

Sitting up tall, keep one foot placed flat on the floor and bend the other one, bringing the ankle to rest on your grounded thigh, foot flexed. Take a few deep breaths. If it feels good, you can fold forward over the legs for a deeper stretch in the glutes. For some people, performing a pigeon pose seated requires too much external rotation of the hip (and can lead to knee pain), so taking a version of the pose lying on the floor can be a good option: Bend one knee slightly and rest the other ankle on top, holding for at least three deep breaths. If you have the flexibility, you can reach through with your arms, grab the lower leg behind the thigh, and pull your legs towards you for a deeper glue stretch. "This pose is great for stretching out through the side muscles of the torso, opening the hips, and groin, and is particularly good if you've got tight hip-flexors," Harding said. "We were made to move laterally, twist, and reach up."

Sit on the edge of your chair with your legs spread apart, feet naturally turned out. Reach up and feel the stretch along your side body, ensuring your torso doesn't twist forward and the chest stays open. Rest the lower arm on the leg but don't collapse through the shoulder. Hold for three deep breaths. Emily Harding demonstrating how to deepen the stretch.
Rachel Hosie/Insider

If it feels good, Harding recommends taking the lower hand to the inside of your calf or ankle. A slightly modified version of the pose, which is great for anyone with shoulder issues, is to bend both arms at 90 degrees, resting the lower elbow on the thigh.

"Whatever you want to do to find that side stretch," Harding said.

Related Links
Here are the best yoga types and poses to help you lose weight
I worked out like Britney Spears for a week and my abs have never felt so sore
There's now evidence that jogging is the best exercise for people whose genes make them more...
Next on Business Insider
Do sugary cocktails actually cause a hangover? The research-based effects of mixing sugar and alcohol