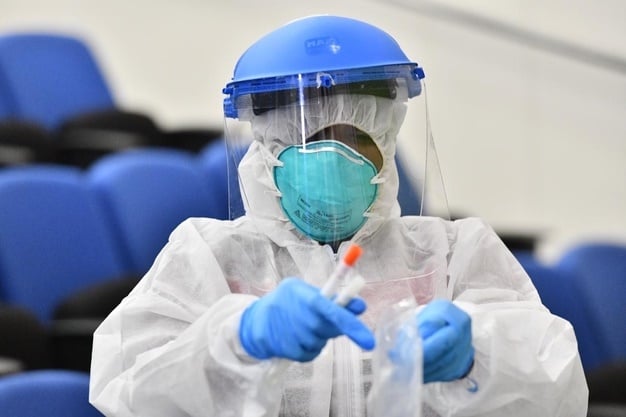 Some coronavirus patients are developing dangerously low levels of oxygen long before they start to feel any shortness of breath.

Dr. Richard Levitan noticed the condition, called "silent hypoxia," when he volunteered at a New York City hospital for 10 days in March. Seemingly mild patients came in with blood oxygen levels so low they should have been unconscious, he wrote in The New York Times, and their chest scans revealed rampant pneumonia.

"Their X-rays looked awful, their oxygen was terrible, and yet they're completely awake, alert on a cell phone, and all they said is they've been somewhat sick for days," Levitan, who works as an emergency-room physician at at Littleton Regional Healthcare in New Hampshire, told CNN. A computer tomography (CT) X-ray scan shows the signature "ground glass" look of a severe COVID-19 infection, which is caused by fluid in the lungs.
Weifang Kong and Prachi P. Agarwal

By the time these people start to notice difficulty breathing, their illness could be dangerously advanced. Levitan said that usually happens two to seven days after their first Covid-19 symptoms.

"Some may ultimately require a ventilator," he added.

New York City officials have said at least 80% of coronavirus patients who were on ventilators in the city died. Survivors can walk away with long-term physical and psychological damage.

Levitan says that catching pneumonia early on, before shortness of breath sets in, could spare patients with silent hypoxia.

Doctors aren't sure how they should treat silent hypoxia

Pneumonia causes fluid to fill the microscopic air sacs of the lungs, preventing the sacs from diffusing oxygen into the blood. With regular hypoxia, that fluid buildup stiffens the lungs quickly and causes the sensation of breathlessness.

But for those with silent hypoxia, the lungs remain pliable, even as they slowly lose their ability to absorb oxygen.

"The problem is we're not used to seeing this volume of patients with ARDS that are profoundly hypoxic and yet aren't looking sick," Dr. Trevor Pour, an emergency-medicine physician at Mount Sinai Health System, told Business Insider in early April. "It's confusing to us."

A debate over whether to put oxygen-deprived Covid-19 patients on a ventilator - or "intubate" them - has emerged in the last month.

"We started treating this as a knee-jerk intubation-ventilation process because that's what we've done with people who have such profoundly low oxygen levels," Pour said.

Patients who aren't struggling to breathe may recover with simple oxygen treatment rather than a ventilator, even if their blood-oxygen levels are low, Dr. Astha Chichra, a critical-care physician at Yale School of Medicine, told Live Science.

"The key difference we've found between these folks is that the people who are working hard to breathe are the folks who usually need to be intubated," Chichra said.

Doctors typically look for an oxygen saturation of 95% to 100% for healthy patients. Oxygen levels below 90% signal a clinical emergency, according to the World Health Organisation.

Levitan said some Covid-19 patients were walking into the hospital with levels as low as 50% - which should leave them unconscious.

To avoid that, people with other Covid-19 symptoms, like coughing, fever, or fatigue, can use a pulse oximeter daily for two weeks. If you get an alarming reading, Levitan wrote, call your doctor before heading to the ER, just in case you misinterpreted it.

Anybody who has trouble breathing should seek immediate medical attention, according to the Centers for Disease Control and Prevention.