Potato prices jumped by more than 43% over two days last week, as rains in the Free State disrupted supplies.

Quoting figures from industry body Potatoes South Africa, the global news platform FreshPlaza reported that on Tuesday last week, a 10kg bag of potatoes cost an average of R37.15 at the major municipal markets. By Thursday, it reached R53.29. Due to the good rains received in many production regions, such as the Free State, potato producers were not able to harvest potatoes at the same pace as they normally do, Dr André Jooste, CEO of Potatoes SA, told Business Insider SA.

"This resulted in lower supplies of potatoes being sent to markets and hence potato prices increased."

See also: Some SA farmers got only R10/kg for pork after a record three million pigs were slaughtered last year

At least one person was killed in Welkom in the Free State last week amid flooding that followed heavy rain. Thabong, Virginia, Allenridge, and Ventersburg were some of the areas worst affected. According to a SABC report, the mayor of Matjhabeng asked that disaster areas should be declared.

At the end of last week, a bag of 10kg "top 10% class 1 medium potatoes" fetched R85 at the Durban market and R79 in Johannesburg, FreshPlaza reported.

At one stage, there were only 500,000 bags of 10kg each available countrywide, but supplies have since started to recover. On Tuesday, 10kg bags of potatoes fetched on average R49.70 at the Johannesburg market.

Potato harvests have bounced back after the drought in 2016, which caused a big shortage of potatoes, and pushed up prices. 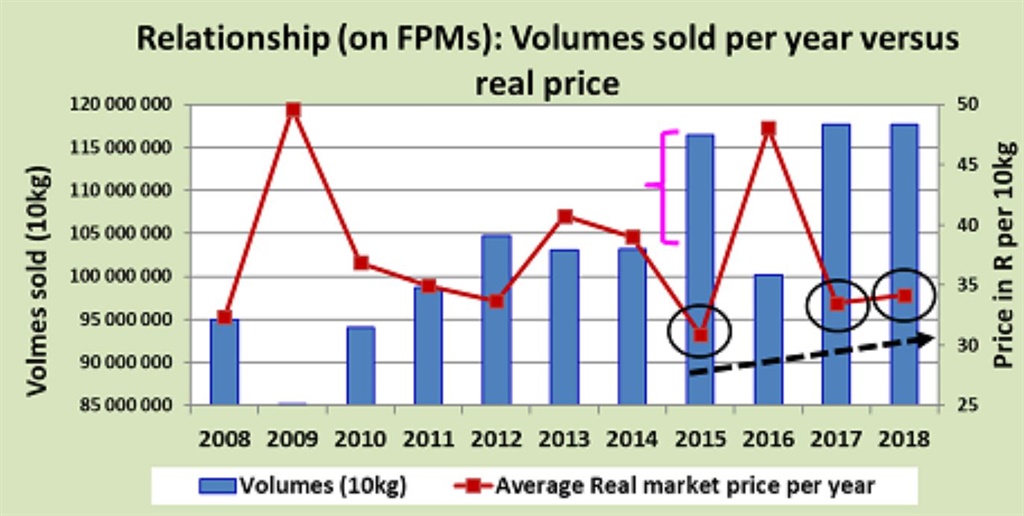 Potato prices usually start to increase from end August, and start to decline from December towards June. This was not the case in 2016, however, when the highest prices where realised during the early months of the year, says Jooste,

Demand remained relatively strong over the last couple of months and is linked to the total supply of potatoes, says Jooste.