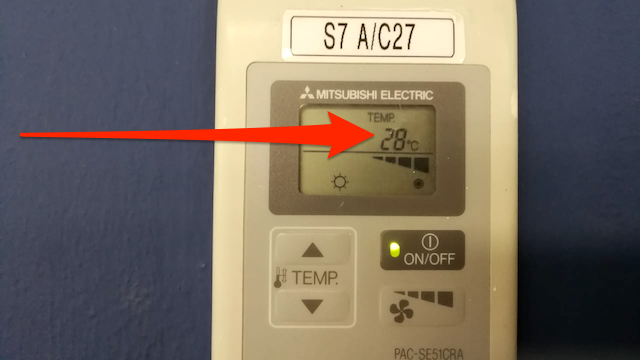 Every office of sufficiently large size has at least one: that person who turns the air conditioning up to 28 degrees Celsius in a desperate – and entirely useless – attempt to warm things up, and so kicks off the aircon wars.

Building managers say deep winter is the prime time for nasty arguments around the right thermostat setting for the office AC, often, but not exclusively, between men and women.

See also: This is the best aircon temperature for South African offices

But there are other reasons you should never set the office air-conditioning temperature to 28 Celsius, or to a much lower setting in response.

Here's why messing with the office aircon settings in winter is a very bad idea.

It doesn't make any difference if you crank up the AC all the way.

If you want your office at the ideal temperature of 22 degrees Celsius, turning it all the way up or down will not get it there any faster. Even if it sometimes sounds that way.

The maximum heating and cooling potential for any aircon system is fixed, AC experts say. Really smart systems will start to slow things down as they start to approach the desired temperature, to avoid overshooting, but they still aim to get to the programmed temperature as soon as practical. They will heat the same volume of air at the same speed no matter what the target.

Air-conditioning technicians speculate that the supposedly smart people who should realise this – but don't – may be fooled by automatic fan settings. If fan speed is not locked down manually, changing the thermostat setting dramatically can cause noisy fans to suddenly start up at full blast, as a system heroically tries to do the impossible and heat a large open-plan office to 28 degrees while it is hovering around freezing outside.

The wrong temperature – and a lack of control – reduces productivity.

The wrong temperature can have a huge impact on productivity and profits – but research since the 1970s strongly suggest that perceived comfort has a great deal to do with the ability to control the environment.

So if nobody fixes your dramatic temperature setting before things get thermally out of hand, you are still doing damage if others notice the changing settings on the aircon, and realise they lack control of their environment.

See also: Here’s what you can do when an infected colleague insists on coming to the office this flu season

It is terrible for the environment.

Eskom estimates that air-conditioning uses 26% of all electricity consumed in the commercial sector, far above any other use. That increases dramatically at the far end of the temperature spectrum; an AC system constantly trying to reach 12 degrees or 28 degrees while it is far hotter or colder outside sucks down electricity at a furious rate.

Air conditioning to fight hot temperatures makes for an especially vicious cycle: the AC uses electricity mostly drawn from carbon-heavy generation, then pumps heat from inside a building into the atmosphere while generating waste heat in the process – adding infinitesimally to the very heat the system is meant to combat.

Heating also takes up vast amounts of energy, though you may feel less bad about heating up the environment on a chilly day.

By one estimate a thermostat one degree closer to the outside temperature can save 5.4% of the energy cost of keeping things comfortable.

As best we can tell nobody has studied the environmental impact of an aircon war where temperatures are switched between 12 degrees Celsius and 28 degrees Celsius, possibly because scientists can not imagine that adults could do anything so stupid.

Between CCTV, "toy" fingerprint kits, and the artfully-constructed hide for direct observation from underneath the desk across the passage from the control panel, there is no escaping detection.

This is definitely going into your file.