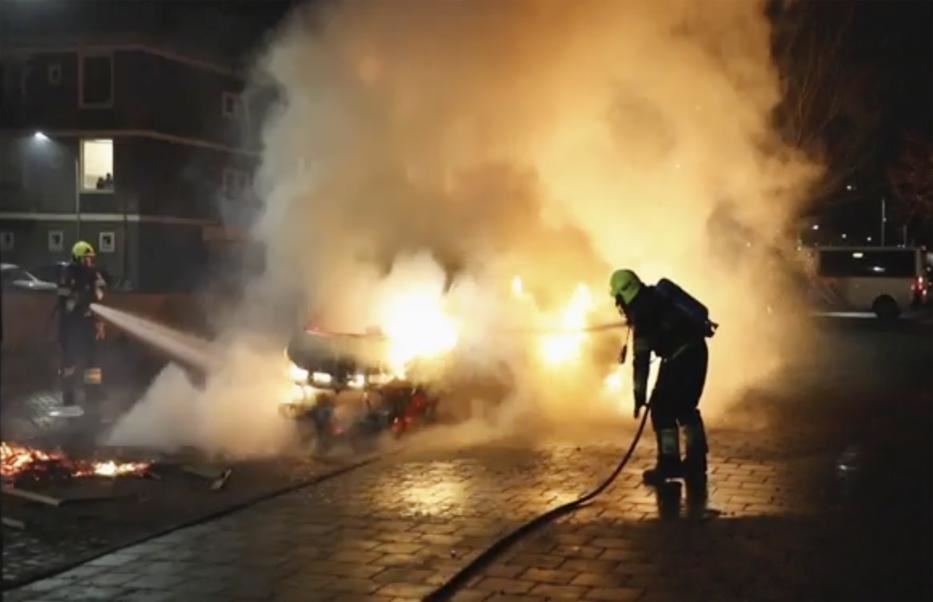 In this grab taken from video on Monday, Jan, 25, 2021, firefighters extinguish a vehicle set on fire by rioters, in Haarlem, Netherlands. Groups of youths have confronted police in several Dutch cities defying the country’s coronavirus curfew and throwing fireworks. Police in the port city of Rotterdam used a water cannon and tear gas in an attempt to disperse a crowd of rioters Monday night.

European security officials fear public frustration - recently seen in days of rioting in the Netherlands over COVID restrictions and a shaky vaccine rollout - has reached a limit that will see increasingly heavy public protests and anti-lockdown violence. While the new coronavirus vaccines have brought some hope, it will take months before governments here are able to inoculate everybody and undo their lockdown rules.?

A security warning on Covid-violence, officials say, has been made formal and distributed throughout aligned security services in the Schengen zone.

Four days of heavy rioting in the Netherlands over the weekend -- blamed on a stringent lockdown as second and third waves of COVID cases spike across the continent - caught the attention of domestic security officials across Europe. They fear that Europe's tradition of energetic political protests could take an ugly American-style turn as lockdowns are very likely to continue throughout the spring.

"The Dutch normally don't riot like this," said a Belgian federal police official in Antwerp, home to Belgium's largest Dutch-speaking population. "We tend to have much tougher demonstrations than they do and Belgians are just as frustrated as anyone with these lockdowns. It's a major concern for all the local police municipalities and there's an effort to coordinate with federal officials." In Belgium, for instance, a protest over pensions a few years ago turned into a pitched street battle with the police in which demonstrators hurled bricks and police returned fire with water cannons.

?"COVID, anti-vax conspiracies, 5G tower fears, and now the bizarre QAnon stuff is taking hold across parts of Europe as people's frustration and fear's turn paranoid and angry," said the official. "In terms of 'disorganized' threats I've never seen anything like it. Seemingly normal people have begun to crack under the stress."?
The top Belgian domestic security official confirmed as much to the AP Wednesday.?

"The violent demonstrations that degenerated in the Netherlands have apparently incited certain people to call, also in our country, for demonstrations against the health measures," Belgian Interior Minister Annelies Verlinden's office told the AP in response to questions about the concern that Belgium's long-term 9 p.m. curfew would come under fire by protestors. ?

The Belgian police official, who works in terrorism and organized crime and asked not to be identified, said that Belgium and France have far more restive immigrant-dominated suburbs than the Netherlands and these areas have a long history of anti-government outbursts.?

"Our suburbs are dominated by communities much more angry than the Dutch face," said the official of Belgium and France's immigrant communities, which have been heavily policed over ISIS links and frequently complain of poor treatment at the hands of the police under normal conditions. ?

"These are the areas stressed the most, [full of] working families, limited economic options to avoid the plague and a very fair sense than the government has done too little to help them in an enormous time of crisis," said a French police official based in Paris. "It's a matter of when we have a major manifestation of this anger, not if."?

The working-class suburbs of Paris are ready to explode

"The working class [suburbs] of Paris are ready to explode," said the officer. "Everyone is tired and increasingly losing work. The government and police were hated before COVID and now its much worse as people suffer."?

The officer described a situation in which the densely packed public housing - already overcrowded and poorly maintained - has turned into the worst of all worlds: The infections are spreading because police can't effectively enforce lockdowns and the community is tired of being policed. ?

"And all we are going to have to offer them in the coming months will be more lockdowns, I fear," said the official. "As the weather improves we will see the same scenes as last spring."

'The right-wing will exploit them in Germany, the left-wing in Athens. It's going to be a long spring for everyone'?

Officials in central Europe and the Balkans have seen regular outbursts of frustration - Serbia saw widespread riots over restrictions last summer, while Greece and Albania have had smaller demonstrations beaten down by government forces. But a Greek official said they expect the entire region to face unrest this spring as lockdowns continue and increasingly frustrated citizens wait for vaccinations.?

"Israel and Lebanon have seen heavy riots to our south and northern Europe is starting to have them as well," said the official. "In all these places the frustrations of the people can be used by different groups: The right-wing will exploit them in Germany, the left-wing in Athens. It's going to be a long spring for everyone."

Related Links
Boris Johnson extends England's coronavirus lockdown into March
Ireland suspends visa-free travel from South Africa – and arrivals must stay in 'quarantine hotel'
Qatar will now be flying out of SA 26 times a week – but you still can’t set foot in Doha
Next on Business Insider
Inside Nike's high-profile gender discrimination lawsuit, where plaintiffs claim unequal pay and more