What appeared to be an exotic orange bird rescued from the side of a road and brought to a wildlife hospital in England has turned out to be a seagull covered in curry.

A bright orange gull was rescued by members of the public who spotted the bird on the side of the A41 road in Haddenham in Buckinghamshire, England, and alerted Tiggywinkles Wildlife Hospital, who posted about the incident on Facebook.

It remains unclear how the gull got itself covered in curry in the first place, the post explains. The curry was coating the bird's feathers, making it unable to fly. 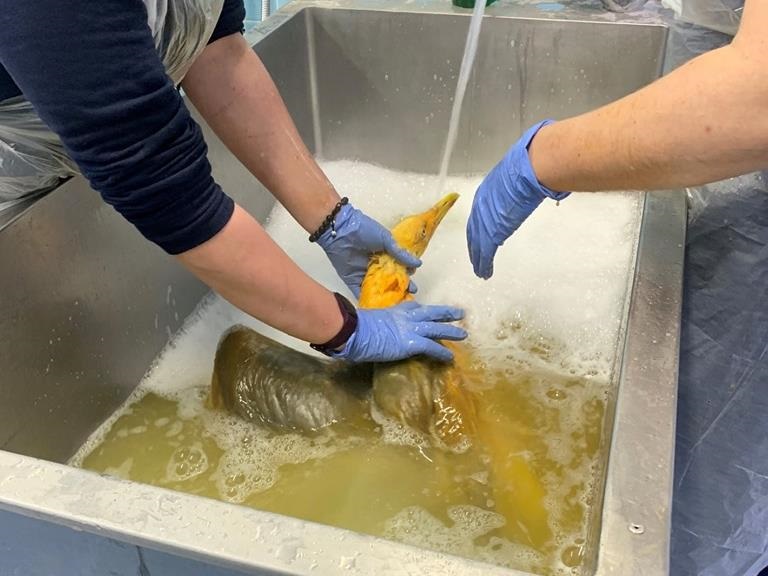 "We have no idea how he got into this predicament," the post reads. "But thankfully, apart from the vibrant color and pungent smell, he was healthy."

The response team at Tiggywinkles Wildlife Hospital, in Haddenham, gave the gull a bath to remove the curry from its feathers. The team named the gull "Vinny," after Vindaloo curry.

Vinny is now curry-free and should be released soon, the post states. Vinny the gull, all cleaned up.
Tiggywinkles Wildlife Hospital / Facebook

"This is one of the strangest casualty circumstances we have seen in a while," the post reads. "We had no idea what to expect - and would never have guessed at this!"

Twitter users had a few things to say about the curry-covered bird.

Some saw themselves in the gull.

When you realize you have an ACTUAL spirit animal. https://t.co/7D6DkmAHLI

Others are calling for Disney to make a movie based on the event.

Concept: Ratatoille but it's a seagull who opens a curry shop. https://t.co/EQ0iT0VWZn

This isn't the first time an unsuspecting seagull took a curry dip. A similar event occurred in southeast Wales in 2016, when a volunteer brought in an orange gull to the Vale Wildlife Hospital.