Earlshall Castle, a 53-acre stately home in Scotland that has links to royalty, is on the market. The castle, which is six miles from St Andrews and 55 miles from Edinburgh, dates back to the 16th century. It was thought to be first occupied by relatives of Robert the Bruce, former King of Scotland, according to a brochure from the real estate agency Savills.

A spokesperson for Savills, the agency selling the property, told Insider that there is no official asking price.

The castle was visited by famous monarchs, including Mary Queen of Scots and James I of England, according to Savills.

After the Bruce's direct male line died out in 1708, the castle was bought and sold to other buyers through the years. The castle underwent a restoration project in 1890 after "more than half a century's decay and neglect" had taken their toll, according to Savills' brochure.

The castle has 10 bedrooms, eight reception rooms, two dressing rooms, six bathrooms, and three cottages in its grounds (not pictured).

Upon entering the castle, you'll find a kitchen that's bursting with colour. 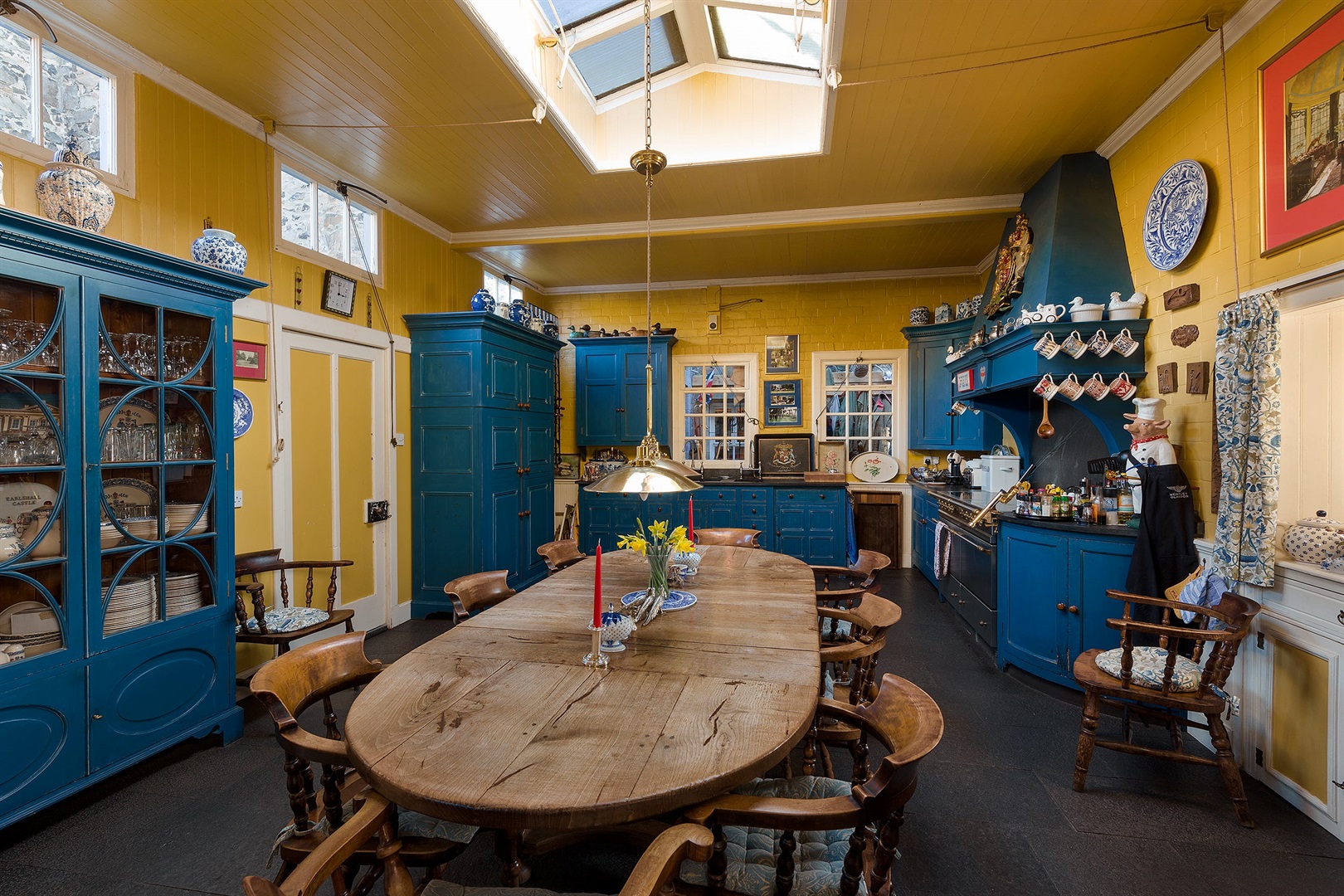 The kitchen has a panelled ceiling, stone tiled floors, and an integrated dishwasher and fridge freezer.

The kitchen has an archway that leads to the sitting room. The sitting room has a similar colour scheme to the kitchen, and is decorated with a selection of watercolour paintings.

The spiral stairs that lead to The Great Hall are said to be haunted by the ghost of "Bloody Bruce." The spiral stairs lead to The Great Hall. (Savills)

Sir Andrew, the Baron of Earlshall, who lived in the castle in the 17th century, was known as "Bloody Bruce" for his "brutal" victory at the Battle of Killiecrankie in 1689 during the Scottish Jacobite uprising, according to the Savills website.

Andrew's footsteps are said to be heard on the spiral staircase to this day, the website adds.

A spokesperson for Savills told Insider that the agency declines to comment on the "haunted" history of the property, due to it being "unhelpful" with sales.

Upstairs, the Great Hall — a term used to describe the main room of a royal palace — has a cozy feel to it. The room has a fireplace and timber panelled walls.

The dining room is for more than just meal time. It has a carved stone fireplace and a corner alcove with a window seat.

The "Sma" Room is the smallest room in the castle. "Sma" is a Scottish term for small or little.

The library has a stone fireplace, timber panelled walls, and a red and gold chandelier to match the furniture. There is also an adjoining bathroom, not photographed, according to Savills.

Next to the library is the study, a smaller room with a built-in bookshelf. Like the library, the study has a stone fireplace, according to Savills.

This room, known as the "Mary Queen of Scots room" is one of 10 bedrooms in the castle, according to Savills. For more information about the property, visit the Savills website.