South African scientists have hatched a plan to bribe penguins to build a new colony in the De Hoop Nature Reserve, 232 kilometres from Cape Town.

Called the African Penguin Relocation Project, it is run in partnership by BirdLife South Africa and CapeNature.

Since the turn of the 20th century, we’ve lost 99% of the African Penguin population. Scientists predict they could be "functionally extinct" (less than 50 pairs in a colony) by 2035.

BirdLife SA say it’s because the penguins’ preferred prey - sardine and anchovy - are no longer as abundant as they once were along the west coast of Africa. The fish have instead shifted south and eastwards, away from major penguin colonies. The shift, combined with overfishing, has caused penguin populations to plummet.

Populations on the west coast of South Africa have suffered the most, with an over 60% decrease in the last 20 years.

Other colonies in Namibia, which have low populations of about 5,000 pairs, are currently being affected by avian flu, which has the potential to decrease their numbers further, said Christina Hagen, Pamela Isdell Fellow of Penguin Conservation at BirdLife South Africa, who is leading the project.

Scientists now want to help the African penguins breed in better and safer locations to boost their numbers.

The penguins usually live on a rock in the ocean to protect them from predators. But as fish populations started to change, they haven't been able to find safe breeding rocks. Instead, they’ve tried to move to the mainland.

And while natural penguin colonies like the one at Boulders Beach in Simons Town have thrived due to the protective buffer humans offer, most of the naturally formed colonies won't survive due to exposure to predators like mongooses, caracals, leopards and domestic cats and dogs.

Hagen’s solution entails a dramatic move - relocate the penguins from the Atlantic Ocean to the Indian Ocean, which just might work with the right perks: “Re-establishing the colony will likely take several years, with unfortunately no guarantee of success” said Hagen.

Scientists know De Hoop is a preferred choice for the penguins, after a former colony tried establishing there in 2003, naturally. The move was going well for them, growing to about 18 pairs, before they were wiped out by a caracal and abandoned the site.

It all hinges on getting the penguins to breed. Once they have started breeding at a colony, they stay there for life as it makes it easier to find the same mate each year (which in turn increases breeding success).

To make it happen, Hagen and her team have come up with some creative innovations:

Since January, these very beautiful penguin decoys (model penguins) have been installed to convince the penguins that that there are already birds breeding at the site. 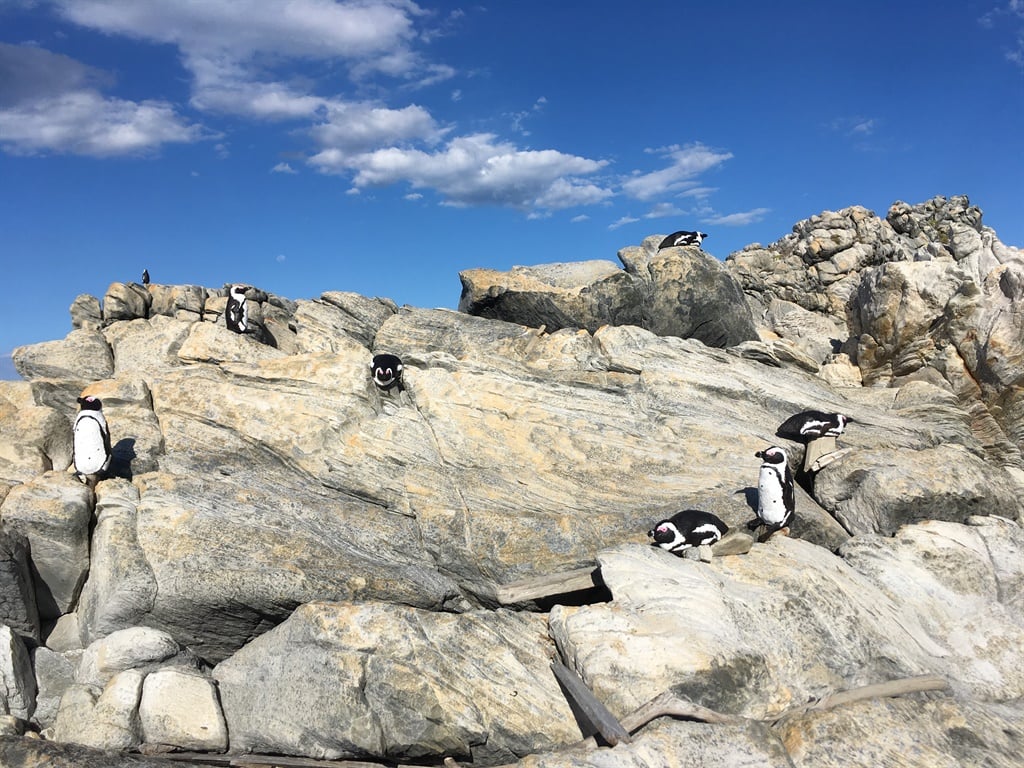 The organisation recruited artist Roelf Daling to create the clay model which was then used as a mould for the decoys. BirdLife SA recruited artist Roelf Daling to create the clay model which was then used as a mould the decoys.Photo C Hagen

I'm honoured to present to you this historical moment. The video shows how an African Penguin gets fooled by my cement decoys. The penguin's collective animal behaviour instinct took over and it laid down, where it otherwise never would have, right in one of the colony's main walkways. This is clear confirmation that the @birdlife_sa new penguin colony project got a good chance of being successful. Next step is to create a fake colony at #dehoopnaturereserve. Note that these decoys are only a small effort compared to that of Birdlife and Christina Hagen! #endageredspecies #concretesculpture #birdlife #birdlifesouthafrica #seabirdconservation #decoy #artandscience #ecologyandart #artsouthafrica #greatmore #africanpenguin #penguincolony #penguin @penguins_international @everythingpenguin @penguins.daily

The team have also thought about using mirrors to trick the birds into thinking there are more in the colony than it seems.

To set the ambiance, they’re playing an enticing soundtrack of penguin colony noises on speakers.

Hagen says it is possible that young penguins looking for breeding sites will be attracted to the site because of the calls being played.

One of the most important security features will be a predator-proof fence. The scientists are also looking at investigating scent deterrents to keep predators away.

In the bush around the colony, they’ve installed camera traps to monitor the movement of predators nearby. And to monitor the local fish populations, they’re using echosounders. It's expected that the penguins won't interfere with local gull colonies as they breed in different seasons.

If these tricks are unsuccessful after a year, the team will physically translocate the penguins.

While establishing new seabird colonies has been attempted in various parts of the world, this is a first for South Africa and for the African Penguin.

Ultimately the scientists need to get the penguins to breed because offspring generally return to the place of birth.

African Penguins begin breeding at around 3-5 years of age. This means that if fledglings (under 1-year olds) are released at the site it will be a minimum of three years before any are likely to return to breed.

Another site identified for establishing a new colony is also being considered further down the coast at the Keurbooms River mouth in Plettenberg Bay.

Related Links
Up to 1 million animal species may be at risk of disappearing — yet another sign we're in the...
The giant flightless bird that killed its owner is now up for sale
This adorable snoring chicken named Chim won the internet, but can chickens really snore?
Next on Business Insider
The Magneto rechargeable LED lanterns sold out quickly when load shedding went to Stage 6