Saudi Arabia just broke its own 2-year blockade of Qatar by flying its soccer team across the border, suggesting the feud could be thawing Saudi Arabia's starting eleven pose for a group picture as they line-up before the World Cup 2022 Asian qualifying match between Palestine and Saudi Arabia in the Israeli occupied West Bank on October 15, 2019.
Getty

Saudi Arabia broke its own blockade of Qatar on Monday by flying its national soccer team over the border for a tournament, suggesting a two-year impasse betwen the countries could be easing.

Qatar hosts the 2019 Arabian Gulf Cup on Tuesday, which features the national teams of Saudi Arabia, the United Arab Emirates, and Bahrain.

On Monday, the Saudi national team landed in Doha after crossing the border by plane from Riyadh, The Peninsula Newspaper reported, effectively breaking the blockade.

The UAE team chose not to fly directly into Qatar, and took a detour through Kuwait. The Bahraini team flew direct to Qatar.

Saudi domestic and international sports teams have played in Qatar since the blockade was imposed, but they have always flown first to Kuwait or Muscat, Oman, before entering Qatar.

Qatar's only border, shared with Saudi Arabia, used to let in 40% of all Qatar's food imports until it was closed in June 2017. Hamed al-Hajri, a member of the Qatar Football Association, holds up the name of Saudi Arabia during the group draw for the 24th Arabian Gulf Cup on November 14, 2019.
Getty

The feud hit new heights in late 2018, when Saudi Arabia said it planned to entirely sever Qatar from the mainland by digging a huge canal. The project has not yet seen major progress.

There have been several indicators in 2019 however, that the blockade may soon be removed.

In January 2019, Qatar and Saudi Arabia played a soccer match, labelled the "Blockade Derby" in the media, at the 2019 AFC Asian Cup. Qatar won 2-0. 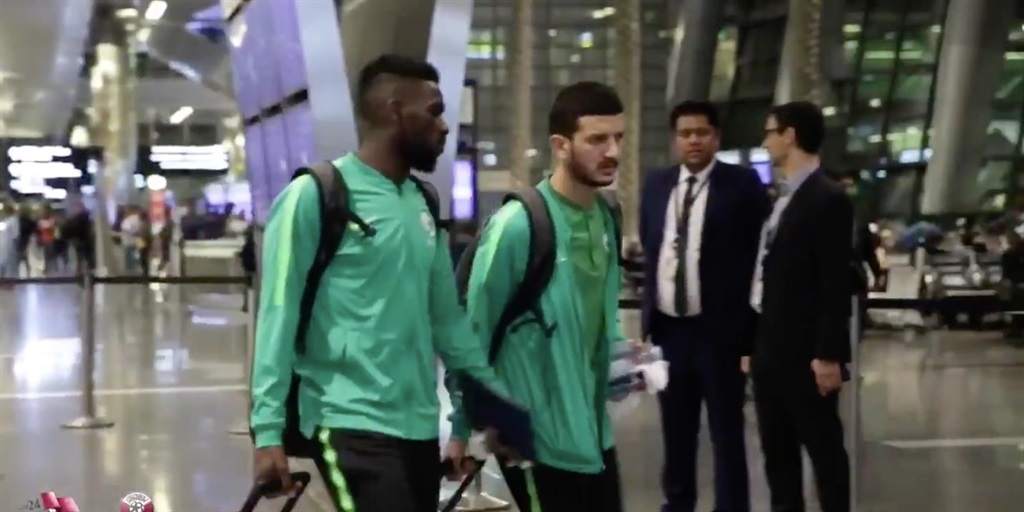 Two members of the Saudi national soccer team land in Doha on Monday.
The Peninsula Newspaper

In May 2019, Qatar's prime minister attended an emergency summit in Saudi Arabia to discuss Iran, by invitation of King Salman, marking his first visit to Saudi Arabia in two years.

While it was a symbolic meeting, Qatar's foreign minister, Sheikh Mohammed bin Abdulrahman al-Thani concluded: "The Gulf summit statement talked about a unified Gulf, but where is it amid the continuation of Qatar's blockade?"

Saudi foreign minister Ibrahim al-Assaf said at the summit that all could be forgiven if Qatar returned to the "right path."

Former government officials have suggested the blockade could soon be a thing of the past.

Abdulkhaleq Abdulla, former advisor to the Emirati crown prince, tweeted in early November: "I can share with you that there have been important developments in resolving the Gulf dispute sooner than expected." But speaking to Business Insider in August, Gulf analyst Dr Kristian Coates Ulrichsen, a fellow for the Middle East at the Baker Institute for Public Policy at Rice University in Houston, said the tensions show no sign of abating.

"I don't see any imminent signs of a thaw in the blockade of Qatar by Saudi Arabia and the UAE."

"The Qatari Prime Minister's participation at the Mecca Summits in Saudi Arabia at the end of May did not lead to any breakthrough, as some beforehand had hoped it might." The Saudi national soccer team board the team bus at Doha Airport on Monday.
The Peninsula Newspaper

"The leadership in Abu Dhabi remains resolutely opposed to any normalisation of ties and easing of the blockade."

The Arabian Gulf Cup stars runs from November 26 to December 8. Saudi Arabia are in Group B, with Oman, Kuwait, and Bahrain.