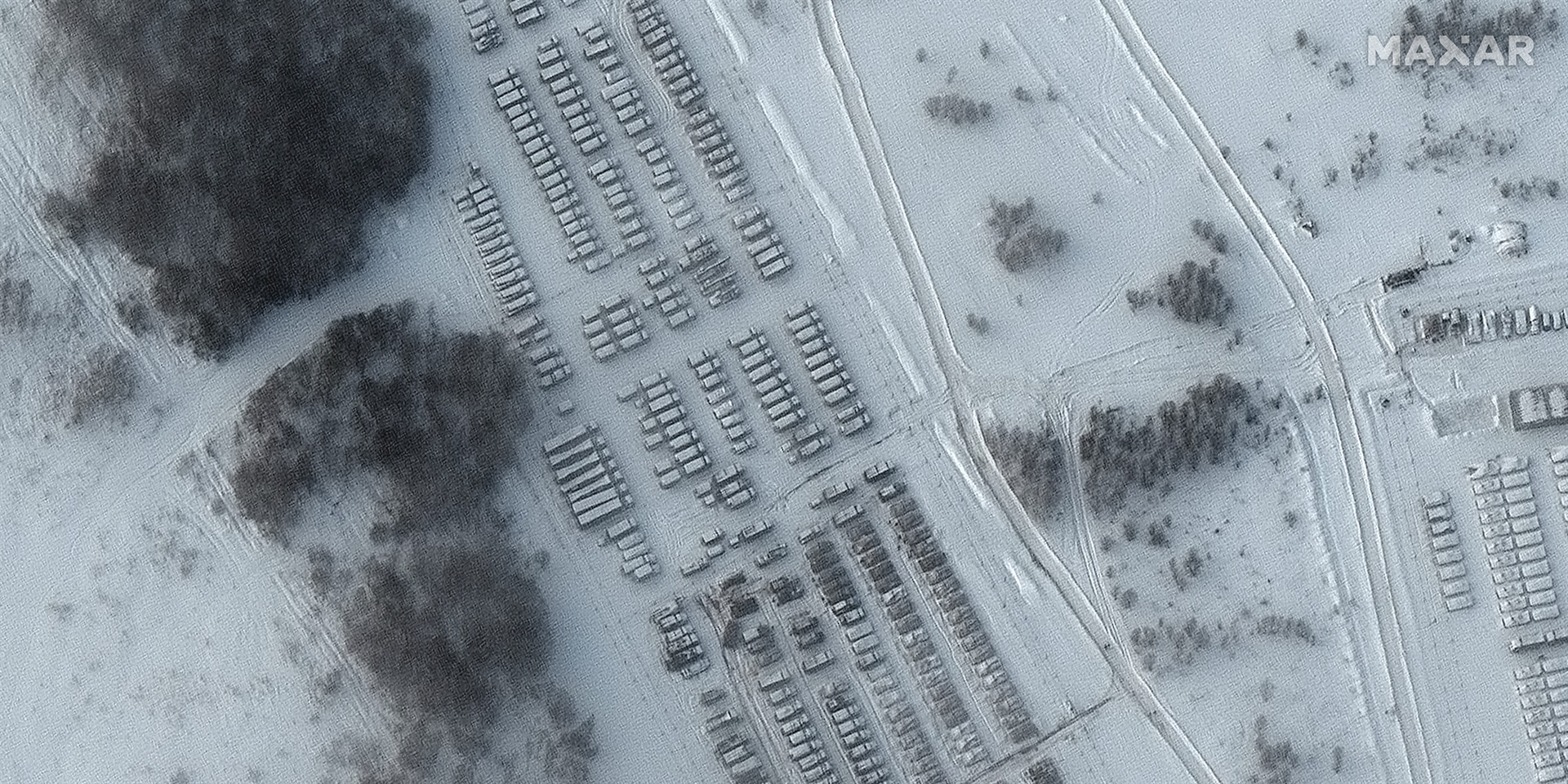 View of tanks, artillery, and tents in Yelyna, Russia, which is about 80 miles east of Belarus, on Jan. 19, 2022. Satellite image ©2022 Maxar Technologies

Maxar Technologies collected photos of what it says are Russian forces deployed to positions from 16 to 161 kilometres of the Ukrainian border at Klimovo, Klintsy, and the Pogonovo training area near Voronezh, among other places in western Russia.

While some photos from the well-known commercial satellite imagery firm are from late December, most of them were taken this week. View of armored personnel carriers and trucks at facility in Klimovo, Russia, about 10 miles from the border with Ukraine, on Jan. 19, 2022. Satellite image ©2022 Maxar Technologies

Russia has massed tens of thousands of troops near neighbouring Ukraine while making demands of the US and NATO that are simply non-starters, such as prohibiting Ukraine and Georgia — both countries Russia has previously invaded — from joining NATO and restricting the alliance's eastward expansion. During high-level talks last week between Russia and the US and its allies, Russian officials reiterated that Russia has no plans to invade Ukraine, but Western leaders remain sceptical given Russia's unusual force posture near its neighbour and efforts to intimidate it. Furthermore, Russia made no commitment to de-escalate tensions, putting that burden on the US and NATO instead. Talks concluded without any major breakthroughs on either side. Commenting on the Russian build-up near its next-door neighbour, US Secretary of State Antony Blinken said Wednesday that "we know that there are plans in place to increase that force even more on very short notice." View of tanks, artillery, and tents at the Pogonovo training area, about 100 miles from the Ukrainian border, on Jan. 19, 2022. Satellite image ©2022 Maxar Technologies

He added that this gives Russian President Vladimir Putin "the capacity, also on very short notice, to take further aggressive action against Ukraine," explaining that this has not only the US' attention, but also that of allies and partners in Europe.

On Tuesday, the White House warned that Russia could launch an attack on Ukraine "at any point." View of a military facility in Klintsy, Russia, about 20 miles from Ukraine, on Dec. 25, 2021. Satellite image ©2022 Maxar Technologies

Toward the end of last year, US intelligence determined that "Russian plans call for a military offensive against Ukraine as soon as early 2022" with "an estimated 175,000 personnel, along with armour, artillery and equipment," an administration official revealed to reporters in December.

More recently, it was announced that the US had intelligence Russia had positioned operatives in Ukraine for a possible "false-flag operation" to justify an invasion. Talking to reporters on Wednesday, US President Joe Biden said that while it is unclear what Putin plans to do, his "guess" is that Putin will launch an offensive against Ukraine, saying "he has to do something."

That said, Biden again warned that Russia will face severe consequences, stressing that Putin has "never seen sanctions like the ones I promised to impose if he moves" on Ukraine.