Sasol's ethane cracker plant at the Lake Charles Chemicals Project in Louisiana. The facility will turn a shale gas component into ethylene, which are used in various chemical products including plastic. Photo: Sasol

Sasol shed almost R20 billion of its market value within fifteen minutes on Friday morning, after the company postponed the release of its results in a cryptic announcement.

It later clawed back some of the initial 12% share price drop, to close the day down 5% at R265, but the market was clearly spooked by its warning that independent consultants found possible “control weaknesses” at its Lake Charles Chemicals Project (LCCP) in Louisiana.

This could mean anything from fraud, non-disclosures by staff or contractual failures, to missed milestones or other liabilities or costs that they didn’t budget for, says Graeme Körner, director and portfolio manager at the asset manager Korner Perspective.

So far, the LCCP, which will have seven production units that deliver various chemicals including a plastics variant called polyethylene, has been a giant disaster for Sasol: at current estimates it will cost between $12.6 billion and $12.9 billion (R184 billion at current exchange rates) – almost double the original budgeted amount. On Friday, Sasol also warned that there has been a technical challenge, which interrupted production at one of the facilities that have already been launched at LCCP.

Sasol’s board delayed its annual results by three weeks, to September 19th, when an independent review and external audit has been completed.

Körner says the market, which is already jittery given the legacy of Steinhoff and Tongaat amongst others, seems to be taking the dimmest possible view on what the “control weaknesses” could mean. Ultimately, he believes that it will probably result in the project missing more milestones, and that the total cost may well increase by a further $500 million.

But JC Louw, CEO of the Sharenet Investments, believes the market may have over-reacted on Friday. Apart from the postponement, there’s not much new in the statement – it certainly doesn’t forecast a shock in the results.

“In fact, the external review will give the board ammunition to take action against those who neglected their duties. And that’s what we want: accountability.”

The sorry state of Sasol

Worth more than R410 billion in 2014, Sasol is a shadow of its former self: its market capitalisation is currently only R152 billion. 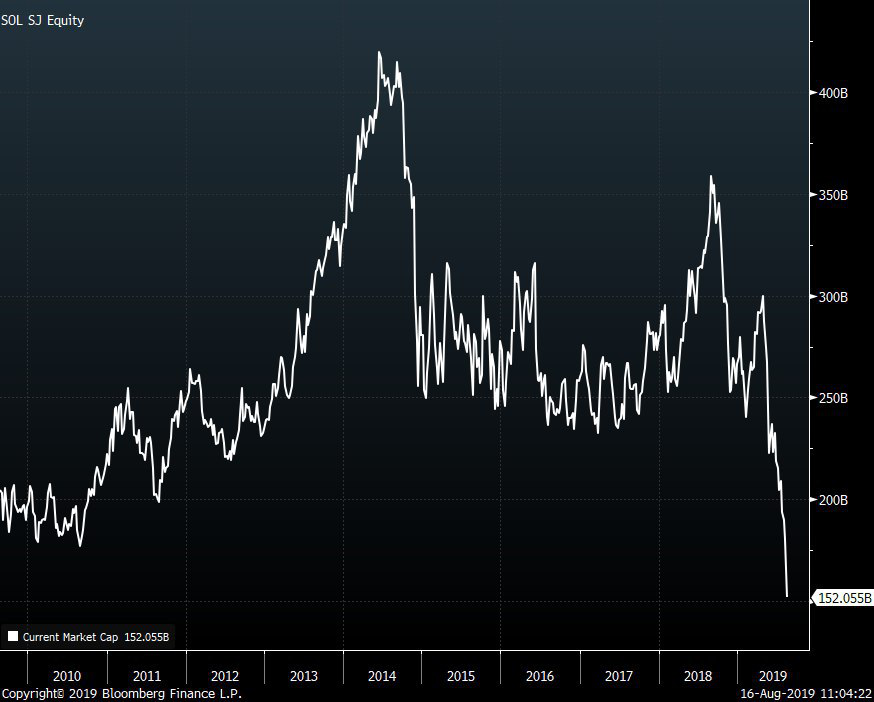 “At this point in time it looks like the LCCP project is a complete disaster that’s put the entire organisation under stress,” said Gryphon Asset Management analyst Casparus Treurnicht. "It just shows you how management pay and outcome does not always align, and shareholders bear the consequences. Management should be held accountable.”

“Given what we’ve seen over the past four months, many shareholders must be seriously asking themselves if the management is really on top of the situation. Investing in companies ultimately translates into backing management,” said Körner.

He said some of the large investors in Sasol, including Allan Gray and the Public Investment Corporation [which manages civil servant pensions], must rightly ask the board to take responsibility.

Since March, the board has had to repeatedly revise estimates of how much the project will end up costing, given large budget overruns.

The thing now worrying many investors is simply whether the returns from LCCP will ultimately be positive given the massive budget overrun and the significant amounts of debt taken on in this process, said Körner. While the most recent management guidance indicated that the project was still expected to deliver a return reasonably above the cost of debt, further overruns could jeopardise this scenario.

Sasol has few tools to get more profit growth out of its operations – it is largely dependent on oil and chemical prices. Oil prices have tumbled in recent weeks amid concerns about global growth.

“With two plants at the LCC already in production, I do not expect that the project will destroy the South African business.”

Treurnicht expects Sasol is now probably heading towards a “deleveraging cycle”: it will have to cut its dividends, sell assets or issue new shares.

“The first two are most likely to happen first - unless the weak global economy sets in and option three also need to be called in.”

Related Links
Sasol's shock slump has wiped out billions - but it's not even among the 10 biggest one-day falls...
The densest known population of this African wild cat now lives right next door to Sasol’s...
Next on Business Insider
McDonald's is quitting Russia after more than 30 years in the country