A family of 5 on a birthday trip, a father-daughter duo who loved diving, and a marine biologist leading the scuba expedition are believed to be among the 34 California boat fire victims 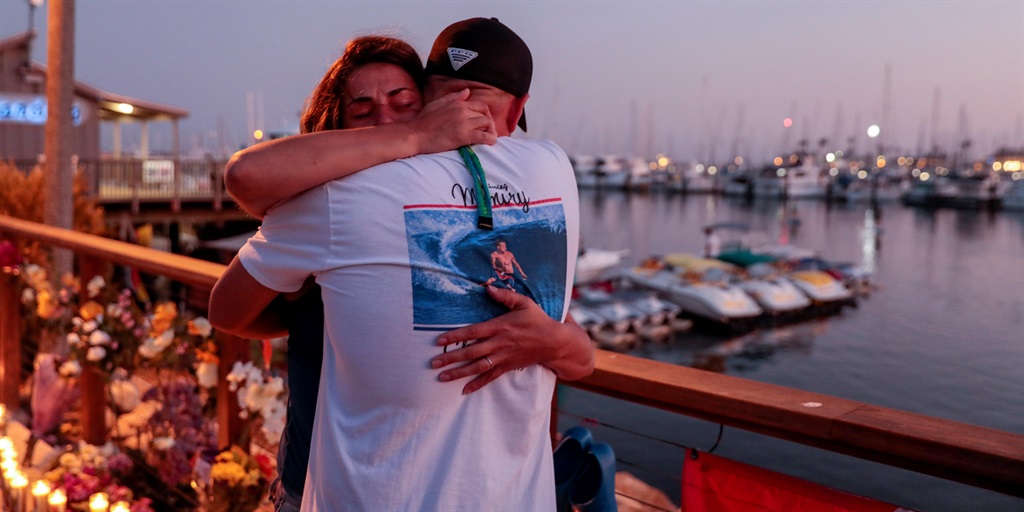 JJ Lambert and Jenna Marsala hug after hanging a scuba flag at a makeshift memorial near Truth Aquatics as the search continues for those missing in a pre-dawn fire that sank a commercial diving boat off a Southern California island near Santa Barbara, California.
REUTERS/Kyle Grillot

A scuba diving boat carrying 33 passengers and six crew members caught fire early Monday morning off the coast of Southern California, and 34 people are presumed to be dead.

The boat's captain and four crew members escaped the wreckage by jumping on to a dinghy and paddling to a nearby boat. Authorities believe there are no other survivors.

The fire broke out aboard The Conception just before 3:30 a.m. local time near Santa Cruz Island, northwest of Los Angeles, on Monday in what police called a "worst-case scenario," because nearly all of the passengers were sleeping below deck. The cause of the fire is still unknown.

Officials have not revealed any information about the victims, though crew members and relatives of people who were on the boat have spoken out about who was on board.

So far, it is believed that a marine biologist helping lead the scuba expedition, a family of five, and students from a local charter school were all on board.

Here's what's known about the victims of the fire so far:

Kristy Finstad, a 41-year-old marine biologist from Santa Cruz, California, was aboard The Conception, and her family believes she died in the fire.

"No final word on my sister Kristy; however, it is likely she has transitioned to be with the good Lord," her brother, Brett Harmeling, said in a statement on Facebook.

"She's extremely strong-willed and very adventurous," Harmeling, 31, told The LA Times. "If there was a 1% chance of her making it, she would have made it."

Finstad is "a National Association of Underwater Instructors [certified] instructor with a degree in Aquatic Biology and a spirit of adventure," according to Worldwide Diving's website.

Finstad's husband, Dan Chua, helps run Worldwide Diving, which Finstad's father founded in 1972. Chua is currently leading another diving trip off of Costa Rica, according to the New York Post.

Sisters Angela, Nicole, and Evan Quitasol were on the boat with their father, Michael Quitasol, and stepmother, Fernisa Sison. They were celebrating Michael's birthday with the three-day diving excursion.

The sisters' stepfather, Chris Rosas, told The Los Angeles Times that Evan was an ER nurse at a hospital in Stockton, Nicole was a bartender in Coronado, and Angela was a middle school science teacher in Stockton.

"They were the most kind, most loving people I've ever met, and I'm not just saying that because they're family," Rosas said. "The way they interacted with anyone they ever came across, they were wonderful."

Michael Quitasol and Fernisa Sison worked at Kaiser Permanente Hospitals in the Central Valley, according to BuzzFeed.

Sison's daughter, Nisa Shinagawa, told KTXL that the couple lived "for their kids" and once worked up to four jobs to make ends meet.

"It was a dream of Michael's to get back into scuba diving," she said. "When him and my mom got together, they wanted to start doing more things in their lives for themselves...they had lived their lives for us."

The bar Nicole worked at started a GoFundMe to help the sisters' mother with funeral costs for all five family members.

Allie Kurtz, 25, was a crew member on the boat, and she died when it caught fire, WKRC reported.

Rob Kurtz said on GoFundMe that his daughter, Allie, is the crew member who died in the California boat fire. She was 25 & following her dream

"The only sense of comfort right now is knowing she passed doing what she loved. You became the pirate you wanted to be, now sail away" pic.twitter.com/2YS8UPvBxW — Brianna Sacks (@bri_sacks) September 4, 2019

Kurtz grew up in Chicago but moved to Los Angeles after high school to pursue a career in Hollywood. She worked on marketing campaigns for Paramount Pictures, WKRC reported.

She later decided to pursue a career as a diving instructor. She was a crew member on The Conception.

"Allie had a heart of gold, and lived her life on her terms. She left the movie industry to follow her love of boating and scuba diving," her father said in a GoFundMe for his daughter. "The only sense of comfort right now is knowing she passed doing what she loved. I will always love you and will miss you forever! You became the pirate you wanted to be, now sail away."

Mike Kohls served a galley cook and deckhand for the boat his brother James told reporters on Monday, CNN reported. James waited to see if his brother was among the survivors of the boat. However, officials said it was unlikely that anyone besides the five crew members that escaped had survived the fire.

James said that his brother was a lifelong surfer and had one daughter, and he made breakfast for the passengers aboard the ship.

The pair lived in the same condominium complex in Santa Monica, California, and were both diving enthusiasts, according to The Orange County Register.

Tributes for the friends were posted on The Malibu Divers dive shop Facebook page.

"All of us are devastated by the Conception dive boat tragedy. We'd like to honour Charles McIlvain and Marybeth Guiney by asking you to tell a story about a dive adventure or (anecdote) you had with them. Please share, I know it will help us all," the dive shop said.

Friends said Guiney had dedicated her life to protecting sharks.

"She was endlessly energetic, optimistic and always had a smile to share. Just can't believe it. What a tragedy for so many," one friend said.

According to McIlvain's Facebook page, he worked as a visual effects designer for Walt Disney Imagineering.

His wife, Jasmine Lord, was not on the boat with McIlvain and Guiney, though she often went on diving adventures with her husband. The OC Register reported that Lord was in Miami at the time of the fire.

A high school physics teacher and his 26-year-old daughter, who he bonded with over diving, were on the Conception

Raymond "Scott" Chan, 59, and his 26-year-old daughter, Kendra, were on the boat when it caught fire, according to KTVU.

Raymond Chan was a high school physics teacher in Fremont, California, and Kendra was a wildlife biologist. Both of them loved diving.

Such heartbreak. A father & daughter from #LosAltos among those on board the Conception. 59 y/o Scott Chan was a teacher at American High School in #Fremont. He was with his 26 y/o daughter Kendra. Chanâ€™s wife shared these pictures & said the two bonded over diving #ktvu 10/11p pic.twitter.com/fTYHGPpUJV — Azenith Smith (@AzenithKTVU) September 4, 2019

Vicki Moore, Chan's wife and Kendra's mother, told KTVU she was in shock after the fire.

"You don't expect to have a child that dies before you. I can barely talk about my husband, but frankly, it's even harder when it's your own child," she said.

Moore told KTVU that her husband and daughter had been diving together for years, and they took at least two boat trips per year.

She said she had dropped Raymond off at the Santa Barbara Harbor on Friday night, and met Kendra there. She had planned to pick the pair up on Monday.

Raymond Chan's school district, the Fremont Unified School District, said in a statement on Facebook: "We are saddened to report the passing of American High School Physics Teacher, Raymond (Scott) Chan, who was among the fatalities of this weekend's boat fire off the coast of Santa Barbara. We send our condolences to Mr. Chan's family and the American High School community."

An Arizona couple who loved to travel was on the boat

Neal Baltz and Patricia Beitzinger, from Ahwatukee, Arizona, are among the 34 people presumed dead in the fire.

Baltz's father, John Baltz, told AZ Family that his son and Beitzinger had been together for eight years.

"They went to heaven doing something they loved together," John Baltz told ABC 15. Beitzinger's family did not comment.

Their neighbor, Jack Belt, told AZ Family that the couple loved to travel, "go to exotic places, and be outdoors."

"Usually when we get together, they talk about vacations, where they've been or where they're going to go," Belt said. "And it's usually hiking a mountain in Europe or diving."

Lisa Fiedler, from Mill Valley, California, is believed to have died in the fire, her mother Nancy told KGO. Apart from her profession as a hairdresser, she also loved nature photography and diving.

"She loved the water," her mother told KGO. "She was a Pisces and she said, 'I think I'm part fish.'"

Lisa grew up in Michigan but moved to northern California as an adult, her mother said. She told KGO that her only consolation about losing her only child is that Lisa died peacefully in her sleep.

"Everybody loved her," Nancy told KGO. "She was a kind, gentle person. She was a naturalist, she loved nature."

A 17-year-old girl, her parents, and a coworker were on the boat celebrating the teen's birthday

When crew members were recused after, they told the couple that saved them that passengers on board the ship were celebrating birthdays on the ship. In addition to the 17-year-old girl, two other passengers were celebrating their birthdays hours before the fire broke out, according to the Los Angeles Times.

"Steve was a 30-year Apple veteran whose energy and enthusiasm touched so many people across our company throughout his career," Deirdre O'Brien, a senior vice president of retail and people at Apple, told SFGate.

One crew member said the teenager was traveling with her parents and that the trip had been a birthday gift.

Apple also confirmed that another employee, Dan Garcia, was aboard the boat as well. O'Brien said that Garcia was "as passionate about his job at Apple as he was about his love of diving."

Two students from a local charter school were aboard the boat

Two students from Pacific Collegiate School in Santa Cruz - which teaches grades 7-12 charter - were reportedly aboard The Conception when it sank.

KSBW-TV reported that staff sent a letter to parents and students on Monday night saying that two of its students and one of the students' parents were on the boat. Tia Salika was a student at Pacific Collegiate School, who was aboard the ship with her parents. She brought along her friend, Berenice Felipe, who also attends the school, SFGate reported.

"Our hearts and prayers are with the families of the victims and those that are missing, particularly those of our students. Right now, our priority as a school is to support our students, staff, and families," the school said in a statement to ABC 7 News reporter Chris Nguyen.