I first made to the switch to Apple phones when I got the iPhone 4s in 2012. Its whopping 3.5-inch display, 8-megapixel camera and 32-gigabytes of storage space made it worlds better than the BlackBerry I previously owned - and since then, I've been a devout iPhone fan, getting the latest version every time I was eligible to upgrade. I thought iPhones were, without a doubt, the best smartphones out there, and I was so set on always having one that I hadn't even considered other phones.

But my perspective on things started to change as years passed and the playing field leveled out. All smartphones had a big screen, a decent camera, and lots of storage - it was the finer details and innovations that made the biggest difference. With Face ID, a technology that was less secure than Touch ID (my identical twin brother can unlock my phone with ease), and the removal of the headphone jack, I felt like Apple wasn't pushing the envelope like it once was.

Even though I was less than thrilled about the newest iPhones, I ended up getting an iPhone Xs Max purely based on familiarity. Next time around, though, I'm not going to settle - and I have the Samsung Galaxy S10+ to thank for showing me the brighter side of smartphones.

The iPhone Xs Max is by no means a bad or unworthy phone, but there are plenty of ways it could be improved - many of which I had never even considered until I began testing the Galaxy S10+. I've been using it daily alongside my personal phone for about two months now, and in plenty of aspects, it's a better phone. Quite frankly, I don't want to give it back to Samsung. First, let's talk about the basics

Despite being a tenth of an inch smaller, the Galaxy S10+'s screen has a curved-edge design, which actually makes it feel bigger. And with higher resolution cameras and double the storage, it edges the iPhone out on paper, but I was slowly convinced otherwise after using it for a while. 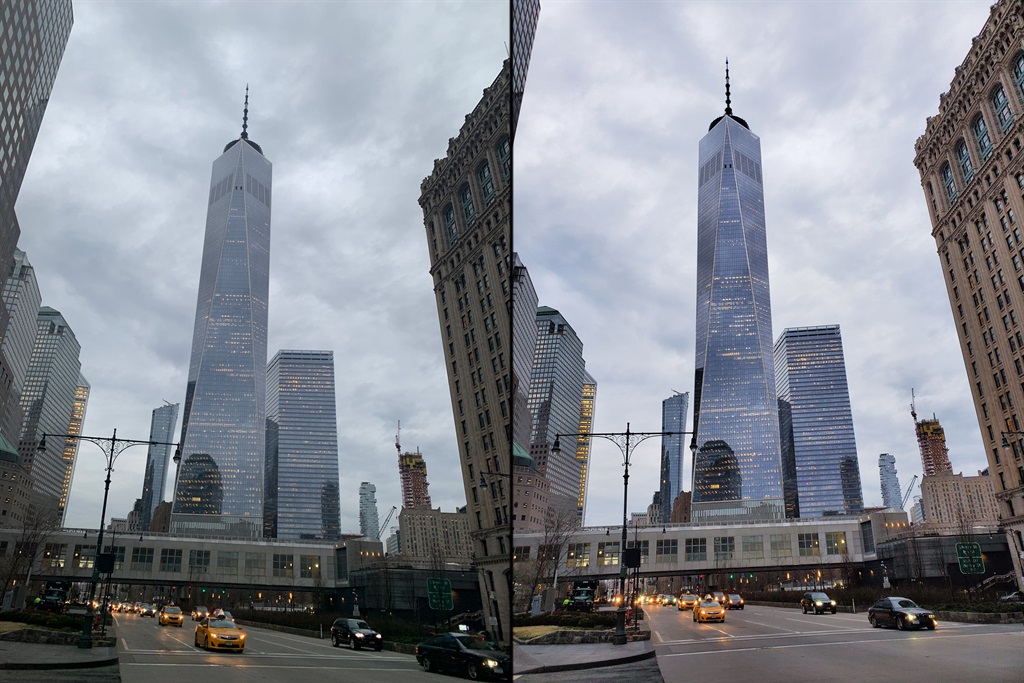 Camera quality and functions are always huge selling points for smartphones, and after using the Samsung Galaxy S10+ extensively to take pictures, I was sold. The best way to describe the camera is that it's designed to perform for all levels of photographers from the average person who just likes a nice and clean shot, to a professional photographer who wants to manually adjust the ISO, white balance, saturation, and focus, to the 80-year-old grandparent who has been trusted to take a family photo.

While I'm not at the level of a professional photographer, I do have a very good eye if I do say so myself, and I'm very particular about the pictures I take. I found the Samsung Galaxy S10+ camera to be clearer, more vibrant, and more versatile than my iPhone. I utilized other features like the wide-angle camera for capturing shots in tight quarters that are closer to what the natural eye sees, food mode for those all-important pre-meal pictures, and Instagram mode for posting directly to my story. From low-light wide-angle pictures (left) to vibrant, detailed food pictures (right), the Galaxy S10+ makes it easy to capture a clean shot regardless of your photography skills.
Amir Ismael/Business Insider

In addition to the obvious difference in picture quality and the abundance of features, the Samsung Galaxy S10+ camera is easy to use. If you've ever struggled with finding the right angle and framing the perfect proportions, the phone will guide you to get the best shot. 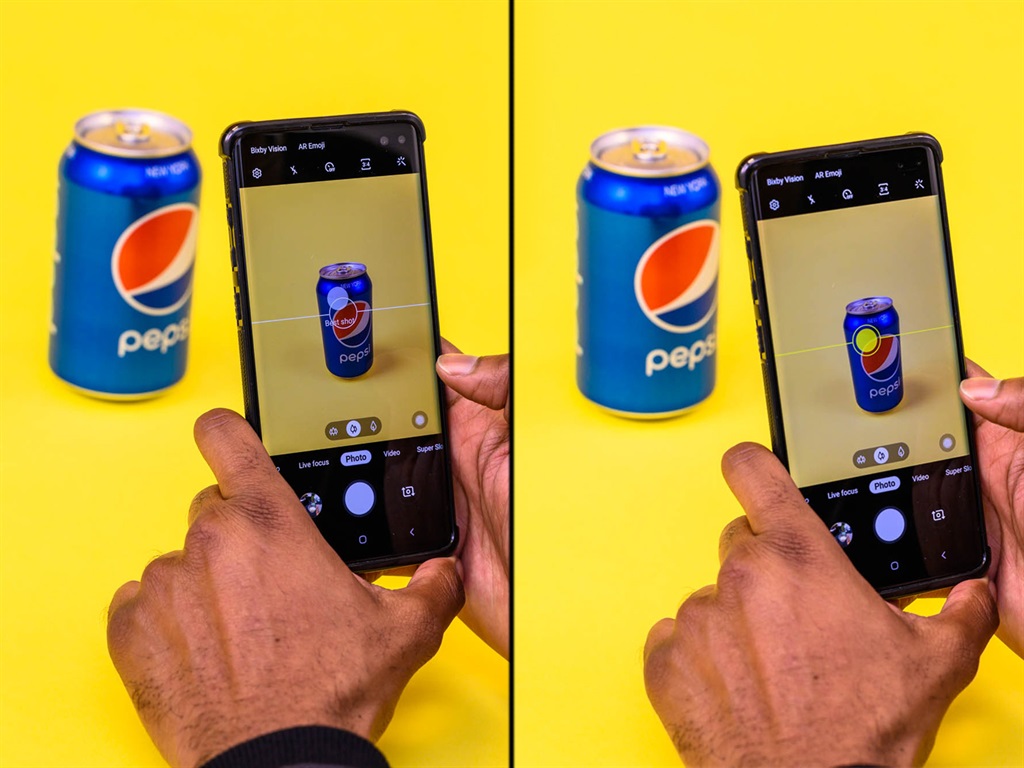 Simply align the circle with the dot and take the picture when the graphic turns yellow.
David Slotnick/Business Insider

No matter what you use your phone for on a daily basis, one thing that we all have to do is unlock our phones over and over. In addition to the standard number, letter, or pattern passcode, the Galaxy S10+ has facial recognition and a fingerprint scanner built into the glass, making it easier to unlock and also more secure. Considering that Face ID has failed me on many late nights in the dark with no glasses and one eye open, and the fact that my twin brother can unlock my phone with his face, being able to use my fingerprint again makes a huge difference. While I'm not overly concerned with my security being breached, it just proves that newer technology isn't always better technology.

The main feature that impressed me most was Bixby Vision, a new program that uses your phone's camera and virtual reality to seamlessly connect the real world with the internet. You can use it to watch a movie trailer by scanning a poster you saw on the street, to automatically translate signs and menus in foreign languages, to learn how many calories are in certain foods, to shop online for items you come across in your day-to-day life, to virtually try on things like sunglasses or makeup before buying them, and a lot more. I think this is just the beginning of how we'll start to incorporate virtual reality into our everyday lives, but Samsung is definitely ahead of the curve.

Another less impressive, but arguably more important feature is the ability to multitask apps. For example, I can continue watching a Youtube video while texting, using the web browser, or even going on Instagram. I also really appreciated being able to charge the Galaxy S10+ and use the wired headphones at the same time. It's also worth noting that my AirPods worked just fine with the Galaxy S10+.

Why I haven't missed my iPhone

My overall impression of the Samsung Galaxy S10+ is that it's the phone you truly want it to be. Beyond reorganising the order of your apps and changing your wallpaper, the iPhone stays pretty much the same as when it came out of the box. The Galaxy S10+, on the other hand, is more customizable. It allows you to place widgets on your home screen, it has five battery power modes each optimized for different levels of use, offers a night mode, several keyboard styles, and plenty of other features that you didn't know you needed, but that ultimately come in handy. All the options might seem overbearing or useless during the few minutes you might play with a phone in a store, but you'll come to appreciate it after a few weeks of ownership.

A lot of the things that I thought would ultimately make Apple the winner for me turned out not to be a big deal. With plenty of social media and messaging apps, iPhone-specific features like iMessage and FaceTime were hardly missed. On top of that, some of my favorite accessories were also available for the Galaxy S10+. I reviewed the Scooch Wingman case for my iPhone Xs Max and it was also my preferred case for the Samsung phone. All of my sentiments about the phone case for the Xs Max can be applied to the Samsung Galaxy S10+ version. I'm not running to buy to the Samsung Galaxy S10+ yet since I'm still under contract, but it's hands-down the smartphone that broke me out of the iPhone-or-nothing mindset. After using an iPhone every day for more than the last seven years, I had no issue making the switch - and found most of the differences in the Galaxy S10+ to be more intuitive and enjoyable to use.

It's easy to get stuck in your ways, but if you're due for an upgrade you should consider the Samsung Galaxy S10+ before jumping on the latest iPhone.