Samsung's Galaxy Note series is one of my favourite line of smartphones, and while the Note 20 series is mostly an incremental update over the previous Note 10 series, it made a big impact.

To be sure, it has an obnoxious R29,999 price tag, but you can make the right move and either find a deal for the Galaxy Note 20 Ultra, or take advantage of Samsung's good trade-in program. Just, please, don't spend almost R30,000 on a phone.

Unfortunately, the standard Galaxy Note 20 won't get a recommendation from me. It's missing some key, albeit superficial, features. But, the fact that it's stuck with a 60Hz screen make the standard Note 20 a write off right from the beginning. That's just poor form for a premium phone in 2020, especially one that retails for R18,999. 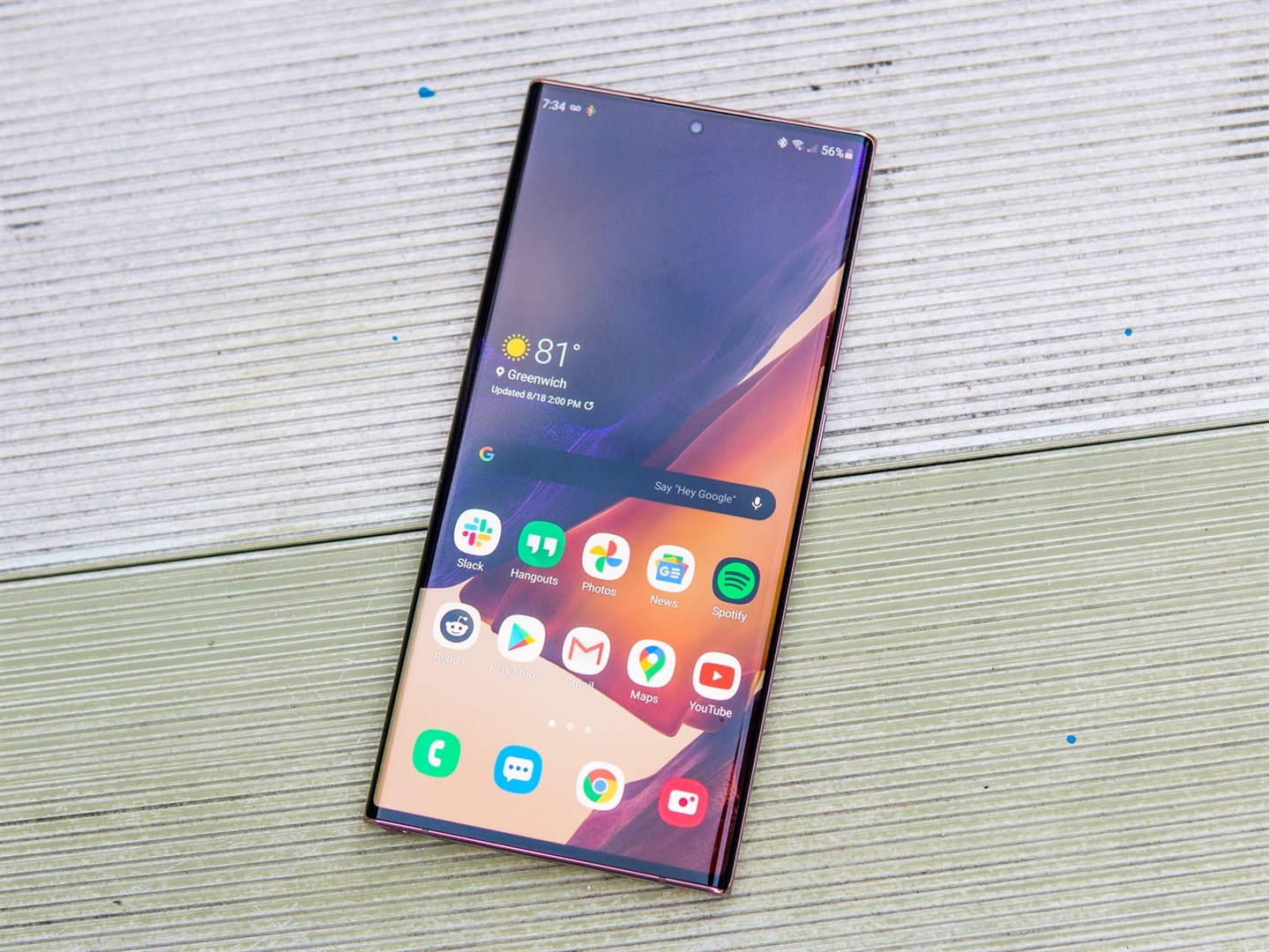 The Galaxy Note 20 Ultra specifically exudes premium vibes with its curved metal and glass corners and edges — it's the most premium smartphone in recent memory. It's a vast slab due to its large 6.9-inch display, but its incredibly narrow bezels surrounding the screen keep the overall phone within a typically large Android phone's footprint.

I tried the 1440p 60Hz option for about eight seconds before I knew that the extra resolution wasn't worth it — after experiencing 120Hz, 60Hz is the visual equivalent of the horrible sound of grinding gears. 1080p resolution is plenty sharp, even on a large 6.9-inch screen.

Unfortunately, the standard Galaxy Note 20's screen is capped at 60Hz, which literally doesn't look good and figuratively when the phone retails for R18,999.

The Galaxy Note 20 series runs on Qualcomm's Snapdragon 865 Plus chip, where performance improvements over the standard Snapdragon 865 will largely be felt, with power-hungry mobile games, if at all. Benchmarks with Geekbench 5 show a 956 single-core and around 3,140 multi-core performance scores, which isn't much of an upgrade over the regular 865, which scored 894/3,322 on the OnePlus 8 Pro.

Combined with the 120Hz refresh rate on the Galaxy Note 20 Ultra, the Snapdragon 865 Plus glides through the day opening and running apps, multi-tasking, using the S Pen stylus to take notes and make annotations, and just about everything else. While performance is impressive, it's completely expected and nothing out of the ordinary for a premium phone. To be sure, performance is similar to other phones running on the Snapdragon 865.

Battery life is excellent, but again, it's what you'd expect. The Galaxy Note 20 Ultra would regularly end a day with decent usage at 25% with four and a half hours of screen-on-time (SoT), including video and music streaming, social media, chat apps, taking photos, and generally browsing the web/reading the news.  If battery life matters to you in a premium smartphone, the Galaxy Note 20 Ultra won't disappoint.

The included 25W charger is a great addition, and it charges the Galaxy Note 20 super fast. The S Pen stylus and 5G

The S Pen stylus is the Galaxy Note series' marquee feature, and it's a useful tool. As with every new Galaxy Note model, the S Pen becomes more and more comfortable and accurate to write with, and the Note 20 represents the pinnacle of Samsung's stylus technology.

Using the S Pen to quickly write notes and mark pretty much anything on the screen, and being able to share it easily, fills a gap that fingers can't. Signing PDFs without printing and scanning has always been one of the main attractions of the Note series, but it was never intuitive until the Note 20 series due to major improvements with the Samsung Note app.

Apart from writing or drawing things, the S Pen is also incredibly useful for more precise tapping on the screen, especially when you have two apps open at the same time. It simply offers more accuracy than a clumsy, comparatively large fingertip, and it becomes super handy for quick work and multitasking.

For those who think it's an odd, outdated tool to include with a smartphone in 2020, you're probably not reading this. And, if you truly don't see yourself using it, it's not my job to sell you on it, and there are plenty of other phones without a stylus to chose from. Still, it's worth mentioning that it's more useful than you'd think, and I do miss it when I have to move onto another phone to review.

5G isn't mainstream yet, so I don't have very much to say about it. I was able to connect to T-Mobile's "slow" 5G network, and I wasn't very impressed. 5G networks still have a long way to go before they're ubiquitous, and they should not be a reason you buy this phone.

Triple-lens camera systems are more-or-less common these days, even on less expensive and less powerful phones. The difference you get with premium phones is camera and photo quality, and Samsung handily delivers here — even if you get Samsung's usual overzealous desire to boost brightness and colours somewhat out of proportion. With that said, that boost you usually get with Samsung phones is less intense on the Note 20, which is good.

Samsung's differentiating party trick with its cameras is its incredible zoom abilities. Check it out.

Here's a photo taken with the 12-megapixel ultra-wide camera on the Note 20 Ultra. Here's the same photo taken with the main camera. The Note 20 Ultra's zooming works better when your subjects are closer. This is at 10x. 20x zoom is about the limit before photos start to look too blurry. The Note 20 Ultra is capable of up to 50x zoom, but photos start to look like paintings at that point. It's more of a novelty. The Galaxy Note 20 has curved edges, which looks nice, but in the simplest terms, curved screens are bad — they cut off and distort content, which is especially noticeable on videos, and they make screens appear narrower than they already are. The curve effectively reduces the digital "page" where I can write with the S Pen, too. Don't believe me? Even Samsung says as much in its fine print in the specs page online: "actual viewable area is less due to the rounded corners ..." Curved screens also cause accidental touches, all while offering no tangible benefit or useful function. Abolish them, I say.

Samsung's advanced ultrasonic fingerprint sensor technology that sits under the screen is polarizing. For some, it works totally fine. For others like me, it works badly. I've always had trouble with it ever since Samsung introduced it in the Galaxy S10 series. It simply doesn't read my fingerprints well, and when it does, it feels sluggish and unwilling. It also fails me when my thumb is "dirty" or damp — one of the obstacles that ultrasonic fingerprint sensors are supposed to overcome. Good thing, then, that the Note 20 comes with facial recognition.

The Galaxy Note 20 series are also expensive, and I wouldn't pay the full retail price for either Note 20 phone. There are also a bunch of truly excellent less-expensive smartphones that don't cost anywhere near almost R19,000. They don't have S Pens or a stylus, but unless you've been using a Galaxy Note for a while, you've probably been managing just fine without  a stylus. Should you buy the Galaxy Note 20 or Note 20 Ultra?

The Galaxy Note 20 Ultra is a very, very good phone with excellent cameras, performance, battery life, and quite honestly the most functionality and versatility in any smartphone, mostly due to the S Pen. I'd recommend it if you can find it for a deal, or if you can take advantage of Samsung's actually-pretty-good trade-in programme.

At the full price, however, it's a tough sell. I couldn't look at you in the face and suggest you spend that much on a phone when there are just so many good phones out there that do everything you really need them to do for hundreds and hundreds less.

Related Links
Google's first foldable Pixel phone is reportedly coming late next year, says a leaked internal...
You can now order the latest top-end Samsung in SA – for the price of a pretty decent used car
Samsung is launching a new foldable phone that fixes the original Galaxy Fold's biggest problems
Next on Business Insider
Ex-Twitter employee guilty of spying for Saudi Arabia in exchange for watch and $300,000 payment