Samsung's Galaxy Note 10 and the Note 10 Plus will be on sale in SA this month. We compared them to determine which one you should buy 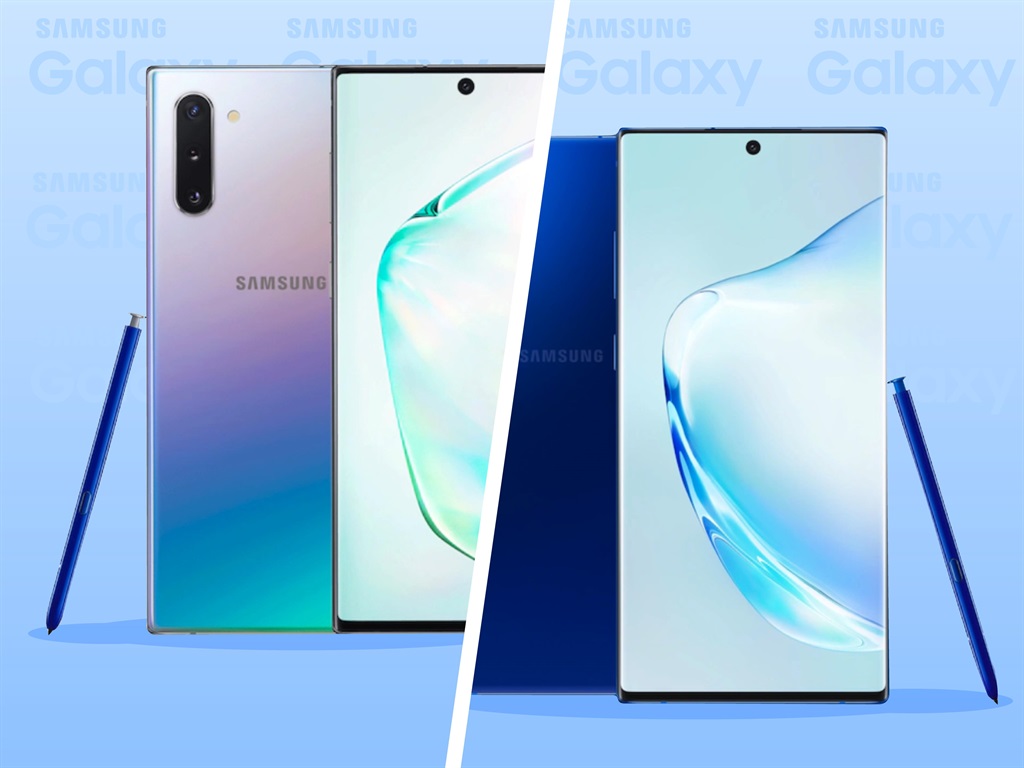 Samsung's Galaxy Note 10 and Note 10 Plus are finally coming.

The phones have a lot in common, but there are some important differences. Here's what you should consider when deciding which one to buy. This will surprise no one: The Note 10 Plus is large. Sporting a 6.8-inch screen, it's larger not only than the Note 10, but also than any Note to date.

The Note 10, by contrast, is actually smaller than the Note 9, with a 6.3-inch screen. That's a heck of a lot of extra screen and could make a difference if you're using your Note for gaming, video editing, or art.

On the other hand, casual users may appreciate the more compact model. The Note 10 doesn't feel like a giant, cumbersome phone. At 5.93 ounces, it's remarkably light and comfortable to hold. The Plus is only a bit heavier at 6.9 ounces, but I could feel the difference. As someone with small hands, I could barely keep hold of it - most people won't be able to use it with one hand.

Finally, there are slight differences in colour availability. Both Notes come in Aura Black, Aura White, and the iridescent Aura Glow, but only the Note 10 Plus comes in the dark Aura Blue. If you're dead set on a blue phone, the Note 10 Plus is your move. Samsung slapped the same sensors and lenses that are in its Galaxy S10 on the Note 10 and 10 Plus. In other words, these phones have excellent cameras.

In both devices, you'll find a triple-camera array on the back. You get a 16-megapixel ultra-wide lens with a 123-degree field, a 12-megapixel wide-angle lens, and a 12-megapixel telephoto lens with 2x optical zoom. There's a 10-megapixel camera on the front.

The Note 10 Plus has an extra sensor that helps create portrait mode-esque depth effects. Apart from that, both cameras have the same advanced features, including a Live Focus Mode that auto-focuses on subjects while you film video, and a Zoom-In Mic feature that filters out background sound while you record audio.

Until we're able to test both phones more thoroughly, we can't speak definitively to the difference in photo quality. But unless you need to shoot a lot of high-end portraits, the extra sensor isn't likely to tip the scales either way. Both phones' cameras are top-notch. Both phones are powered by Qualcomm's Snapdragon 855 chipset (not to be confused with the upgraded 855+, which will power some competing flagships, including the Asus ROG).

However, unless your current phone is lagging, or you find yourself constantly having to re-open apps, 8GB of RAM is likely enough for you. For context, the iPhone XS Max and Pixel 3 XL both have just 4GB RAM, while the Note 9 has 6GB.

Second differentiator: storage. This is one area where the Note 10 is an upgrade from the Note 9: It carries 256GB, while the Note 9's base model had just 128GB. However, the Note 10 lacks a MicroSD-card slot, so you're stuck with the 256GB that you get.

The Note 10 Plus comes in 256GB and 512GB variations. It also has a MicroSD slot, meaning you could add up to a terabyte of storage to it if you were so inclined. I imagine 256GB is more than enough storage for most people - but if you need more than that, get the Note 10 Plus. The Note 10 Plus has the biggest battery of any Samsung flagship yet, clocking in at a whopping 4,300mAh. The Note 10 has a smaller battery not only than the Note 10 Plus, but also its predecessor the Note 9, at just 3,500mAh. Arguably, the biggest differentiator between these two phones is the price.

And there's no denying that the Note 10 Plus packs in a number of improvements. The question for you is: How much are those improvements worth?

The Galaxy Note lineup has always been for power users. The Note's target customer knows how much RAM is in the phone, the screen's resolution, and the size of the battery. The power user is taking action photos, shooting and editing video, gaming, and using all the fancy augmented-reality features the S Pen has to offer.

If you're one of these users, you're upgrading from the Note 9, and you want the next big Samsung flagship, you should be getting the Note 10 Plus. If you're someone for whom an extra 256GB of storage, an extra 4GB RAM, 5G, a fancy camera lens, or an extra 1.5 cm of screen space makes a big difference, the Note 10 Plus may be worth a few hundred extra bucks.

I would contend, however, that this is not the case for most people. If you mostly use your phone for texting, Netflix, Instagram stories, and the occasional game of Words With Friends, you don't need 512GB of storage. You don't need a 4,300mAh battery. The Note 10's screen resolution and RAM, while not the best Samsung has to offer, will probably suit you just fine. Your Instagram stories will still look great.

For most people, the Note 10 Plus offers bonuses, but not necessities. You'll have to decide whether those bonuses are worth R4,000 - for me and many others, they're not, but they may be for you.