Perhaps you've thought about it before: What if I stick TWO monitors together to play games in super-ultra-widescreen?

But that's never been a reality, at least for me and probably a lot of PC gamers out there. When you place two monitors together, you get the monitor bezels right down the middle of your makeshift "super-ultra-widescreen" setup. Those bezels get in the way and just don't work in video games.

So Samsung came along and solved the problem by sticking two widescreen monitors together without that unwanted bezel down the middle. It's created the first "super ultra-wide" monitor.After playing several games on the monitor for about a month, I've decided that the CHG90 and its incredibly wide 32:9 aspect ratio is the new gold standard for enjoying video games. Check out what it's like to play video games on Samsung's super-ultra-wide CHG90 monitor:

If you could pick between a regular widescreen monitor... The impact of just how wide Samsung's CHG90 monitor is lost in the small photo above. Still, I'm going to assume that most of you would pick the wider, better, more impressive second monitor that shows you a lot more, well, game. If you chose the first screenshot, then you do you.

Regular widescreen monitors have the same so-called "aspect ratio" — 16:9 — as your TV, and it's what we've all been used to for the last decade or so.

Samsung's CHG90 monitor is the future — a super ultra-wide future with a 32:9 aspect ratio that makes almost every video game look better and more enjoyable. It's as if someone put two 24.5-inch normal 16:9 displays next to each other and somehow removed the bezels between them.

Summed up in one sentence, playing video games on super-ultra-wide monitor is better than playing on a normal widescreen monitor. It feels like an experience rather than a simple gaming session.

Big, beautiful games like "Battlefield 1," "GTA V," and "FarCry 5" look bigger and more beautiful than ever. It placed me into the game I was playing more than any other monitor I've used. It's the closest thing to virtual reality without putting on a virtual reality headset.

I could see more of my surroundings in "Battlefield 1," for example, which meant I could see more of the scenery, whether it was a beautiful field of poppies or a town reduced to rubble and flames. I could also see a lot more action in my peripheral vision like other players and explosions. As a result, the battlefield is more chaotic and I was immersed into the game's setting and action at a significantly higher degree than a regular monitor.

The Samsung CHG90 also supports HDR, and it makes games look even better.

HDR – short for high dynamic range – clearly makes a difference, and it's especially noticeable when you're playing in a dark room. Without HDR, the picture was brighter, but contrast was literally less dynamic.

Just note that the monitor will only switch to HDR mode for games that support HDR.

The CHG90 comes with technology designed for AMD graphics cards, but Nvidia graphics card owners don't need to worry about that.

Samsung's CHG90 monitor supports AMD's "Freesync" technology that's designed to match the monitor's refresh rate with the frame rate produced from AMD graphics cards. It makes for a stutter- and screen tearing-free experience for AMD graphics card owners, but I didn't experience any stutters or other artifacts with my Nvidia graphics card and monitor set to 144 hertz.

Games are incredibly smooth – if you have the right computer and parts. The Samsung CHG90 monitor supports a 144-hertz refresh rate, which means you can play games up to 144 frames-per-second (fps). To compare, consoles play games between 30 and 60 fps, and there's a noticeable difference when you step up above 90 fps. Movements in games become smoother and objects become clearer while you're moving.

That's all well and good as long as you have a graphics card that's powerful enough to push out 144 fps at the monitor's 3480x1080 resolution. I used one the most powerful graphics card you can buy at the moment – an Nvidia GTX 1080Ti – and I rarely went above 125fps in "Far Cry 5." In "Battlefield 1," I could achieve 144 fps most of the time, but not always.

If you're using a less powerful graphics card, you can reduce the refresh rate on the monitor's menu to avoid stutters or other artifacts like screen tearing, where parts of the screen appear to lag behind others.

The CHG90 monitor has a resolution of 3840 x 1080, which means it has a 1080p resolution that's noticeably less sharp than 2K and 4K resolutions. Indeed, I was using a 2K monitor before the CHG90, and moving from 2K resolution to 1080p felt like a downgrade.

That said, I got used to 1080p resolution after awhile, and the CHG90's width quickly made up for the lower resolution that I'm used to.  Samsung made the right move to keep the monitor's resolution at 1080p. Today's graphics cards aren't powerful enough to push 144fps at 2K or higher resolutions on essentially two monitors stuck together. It would have been pointless for today's gamers if the monitor was a higher resolution, as their computers wouldn't be able to handle the higher fps at high resolutions on such a wide monitor. And 1080p is honestly fine for most people.

In the future when graphics cards become more powerful, however, I'd expect to see 32:9 monitors with 2K and even 4K resolutions.

It also didn't help me become a better player.

Despite being more aware of my surroundings, using the CHG90 didn't necessarily make me a better player.

The GIF above shows this perfectly. The monitor essentially lets me see inside two different rooms at the same time inside the building, but I was still taken down by an enemy because I didn't check around the right corners. Lesson learned, and it's a perfect example that players aren't only as good as their computer parts.

My scores were largely the same as they were when I was using a regular 16:9 monitor or a 21:9 ultra-wide monitor.

And it's not the best option for certain games, either. 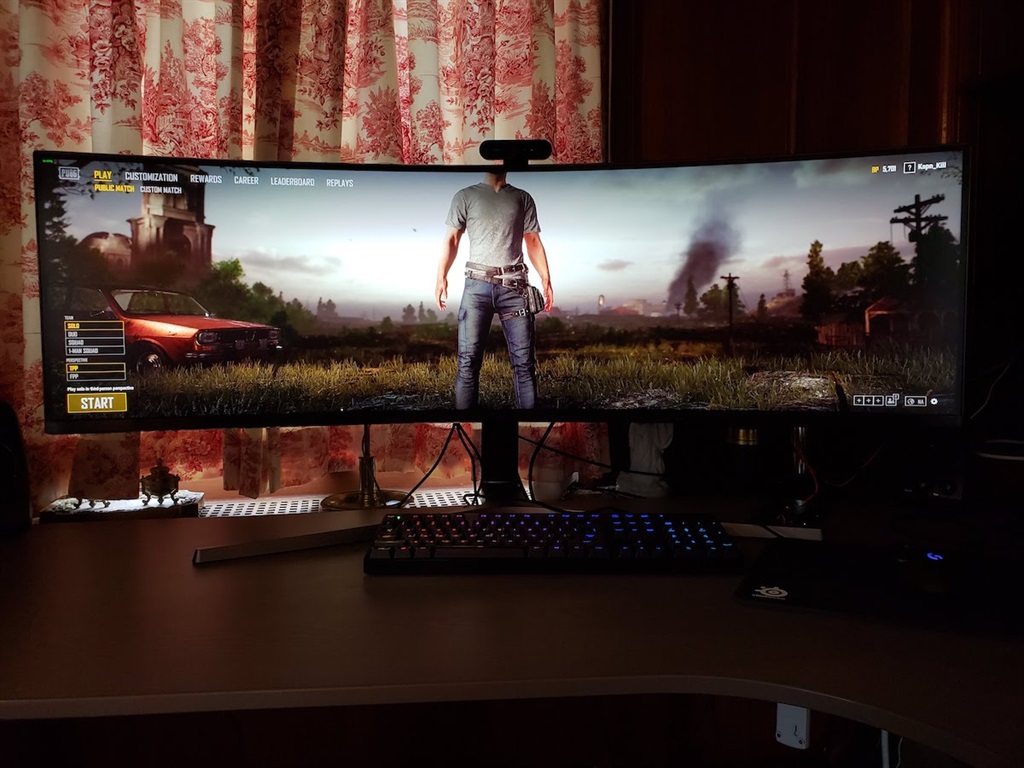 Some games aren't optimized to work on such a wide monitor. The massively popular "PlayerUnknown's Battlegrounds" – or "PUBG" –  isn't optimized, for example.

Above, you can see my character in the game's menu screen is cut off on the top and bottom.

While playing the game itself, it also appears like the image is zoomed in to compensate for the CHG90's outrageous width. Antonio Villas-Boas-Business Insider
Samsung could potentially work out support for the CHG90's 32:9 aspect ratio with Bluehole Studios, the developers behind "PUBG."

Overall, though the CHG90 is fantastic, and I'd love for everyone to experience its wide 32:9 aspect ratio. But be warned: It's mighty expensive. Samsung's CHG90 cost R24 990 at the time of writing, which is the same price as many computers out there. It's almost as expensive as the kind of powerful computer you'd need to make the most of its high refresh rate.

With that in mind, think of the CHG90 monitor as that sports car you've always wanted, and a normal 16:9 monitor as a Toyota Camry. It would be awesome to drive that fast, expensive sports car, but a Camry gets you from A to B in comfort just fine.  Adjusting back to a regular monitor with a normal 16:9 aspect ratio after using the 32:9 CHG90 is pretty easy, in my experience. I didn't feel like I needed its super ultra width to enjoy games, just like I wouldn't need the power and speed of an expensive sports car. I did appreciate the high fps for games, but there are a bunch on cheaper monitors out there — albeit not as wide — that support high fps gameplay.

Should you buy the CHG90 super-ultra-wide monitor?

I'm absolutely sold on the super-ultra-wide 32:9 aspect ratio for gaming. But that is a huge asking price.

If it were me, I'd wait a little while until more 32:9 monitors are released and the overall price tags of such monitors start coming down. But if you have the cash and you don't know what to spend it on, you can certainly make a case for the CHG90.

If you're in the market for a new high-performance monitor right now and about R11 000 isn't within your budget, I'd look at 21:9 ultra-wide 2K monitors. Some of the less expensive models won't have high refresh rates like the CHG90, but they offer more width than regular 16:9 monitors, and you can enjoy the sharpness and detail that comes with higher 2K resolution. If you want the smoothness that comes with high refresh rates, you can get normal widescreen 2K monitors with high 144 refresh rates for as low as R3 940,47.