Cooking at home allows you to control exactly what's going into your food, but that doesn't mean you're immune to mistakes. There are a number of ways you could be consuming more calories than you think, even if you're eating "healthy" foods.

To point out some of the most common "mistakes" that add extra calories, dietitian Paula Norris makes high- and low-calorie versions of the same meal. She then shares photos of the meals on social media and explains how they differ.

Even if you're not trying to cut calories, Norris' photos can provide some helpful lessons and make you rethink how you're cooking. Here are some of her meals and her favorite tricks for reducing calories. Norris replaced a mayonnaise-based dressing for a combination of natural yogurt and Dijon mustard, and cut down on protein.
Courtesy of Paula Norris

Protein is important, but Norris said one of the most common mistakes she sees is people consuming too much meat because they don't understand how much protein they need. The higher calorie salad uses 300 grams of chicken - more than twice as much as the 120 grams of chicken used in the salad on the right. "100 grams of chicken or red meat in a meal is plenty from a protein perspective but main people eat upwards of 200 grams per meal," Norris says.

Pay attention to the amount of healthy fats from foods like avocados. The salad on the right uses less cooking oil and meat with the fat trimmed off.
Courtesy of Paula Norris

Norris says that one of the most common mistakes she sees is people overdoing foods rich in healthy fats, such as avocados. "People will easily consume half an avocado, a tablespoon of olive oil, or half a cup of nuts and pass it off for being healthy," Norris says. Although foods like this are packed with nutrients, they're also extremely calorie dense.

The salad on the right, however, has 100 grams of trimmed steak grilled without oil, two cups of lettuce, four red onion rings, 25 grams of avocado, half a cup of cooked rice noodles, 50 grams of cucumber, four cherry tomatoes, half of a medium carrot, one teaspoon of sesame oil, two teaspoons of lime juice, and one teaspoon of soy sauce.

Measure portion sizes to cut calories without changing what you eat. The bowl on the right uses less cheese, quinoa, sweet potato, and chicken, and adds more veggies.
Courtesy of Paula Norris
These bowls have the same ingredients, but different portion sizes.

In addition to watching portion sizes of meat and healthy fats, Norris says that you can quickly cut calories by reducing the portion size of starchy carbs, like she did with quinoa and sweet potatoes in this recipe. To retain the bulk of the meal, Norris likes to add non-starchy vegetables, as she did here with zucchini, tomatoes, and capsicum.

The bowl on the left has 50 grams of feta cheese, 200 grams of sweet potato, four cherry tomatoes, half a cup of baby spinach, one-fourth a cup of capsicum, one-sixth of a medium zucchini, one cup of cooked quinoa, 180 grams of poached chicken, and a dressing of balsamic vinegar and olive oil.

The bowl on the right has 25 grams of feta cheese, 100 grams of sweet potato, eight cherry tomatoes, one cup of baby spinach, half of a small capsicum, one-third of a medium zucchini, half a cup of cooked quinoa, 120 grams of poached chicken, and balsamic vinegar for dressing.

Limit portions of calorie-dense foods, such as dried fruit. The bowl on the right uses less muesli, no dried fruit, and uses reduced-fat yogurt instead of full-fat.
Courtesy of Paula Norris

Although 170 calories might not seem like a huge difference, cutting a small amount of calories across the day can be the difference between weight gain, maintenance, and loss. The main differences between these breakfast bowls are that the one on the right uses reduced-fat instead of full-fat yogurt, less muesli and dried fruit, and more mixed berries.

Similar to how Norris bulks up her meals with veggies, adding more fruit can ensure you're still getting a filling breakfast. Berries are also a great option because they're low-sugar and packed with antioxidants.

The bowl on the right uses half a cup of muesli, 100 grams of reduced-fat yogurt, three-fourths a cup of mixed berries, two teaspoons of chia seeds, and one teaspoon of pomegranate seeds.

Eliminate cooking oil to gets rid of calories you might not have even considered. The fried rice on the right uses less cooking oil and chicken, and more veggies and cauliflower rice.
Courtesy of Paula Norris
Cooking with too much oil is a common "mistake" that Norris sees people make. One of the biggest differences between these fried rice dishes is that Norris eliminates cooking oil in the later. If you can't completely eliminate oil, Norris said using spray oil or simmering ingredients in water are good alternatives.

The fried rice on the right also uses less brown rice than it's higher-calorie counterpart. Norris says that using a 50:50 combo of regular rice and cauliflower rice, as she did in this recipe, is one of her favorite ways to cut calories without having to drastically change recipes.

Use a 50:50 ratio of vegetables and wheat-products to slash calories without compromising the taste. The bowl of pasta on the right used a combination of spaghetti and zucchini noodles.
Courtesy of Paula Norris

Using zucchini noodles in place of regular noodles doesn't affect how filling your meal is, but it does affect how many calories you're consuming. The main difference between these dishes is that Norris used a 50:50 combo of wheat and zucchini noodles in the dish on the right, less Parmesan cheese, and leaner meat. She also eliminated cooking oil and noted that mincemeat has fat to begin with so you don't need oil to cook it.

The bowl on the left is made with 180 grams of regular mincemeat, one teaspoon of oil for cooking, 15 grams of Parmesan cheese, and one cup of cooked pasta. The bowl on the right cuts down on calories by replacing half a cup of pasta with zucchini noodles (while still keeping half a cup of pasta), 120 grams of extra lean mincemeat, five grams of Parmesan cheese, one grated carrot, one tomato, extra grated zucchini, and eliminated cooking oil. If you want to cut even more calories, you can completely replace white rice with cauliflower rice, as Norris did in the dish on the right. She also used less meat and eliminated pan oil. "You get fats in the meat and sauce, and a bit of water will be adequate if you're using a nonstick pan," she wrote on her Instagram.

The bowl on the right also has more low-starch veggies, such as broccoli, carrots, pepper, and zucchini. "There is no better way to remain satisfied and get plenty of nutrients and fiber in without going overboard with calories," she told INSIDER. She said that some of her favorite lower calorie vegetables are broccoli, zucchini, carrot, tomatoes, capsicum, tomatoes, eggplant, cucumber, squash, spinach, kale, cauliflower, asparagus, bok choy, and peas.

The stir-fry on the left uses one cup of white rice, one tablespoon of sweet chili sauce, pan oil, and 180 grams of meat. The option on the right replaces the white rice with a cup of cauliflower rice, two teaspoons of Sriracha, no pan oil, 80 grams of meat, and adds lots of veggies. The "tacos" on the right use lettuce wraps instead of flour tortillas.
Courtesy of Paula Norris

Replacing lettuce wraps for tortillas is an easy way to cut down on calories without compromising the bulk of your meal. Eliminating carbs entirely can leave you hungry, so Norris added red kidney beans to the dish on the right to keep it filling. Another big difference between the meals is that the right uses less avocado, no cooking oil, and leaner meat.

It also uses Parmesan cheese instead of cheddar cheese. Norris said this is one of her favorite swaps because Parmesan has a much sharper flavor so you can get away with much less.

The plate on the right uses three soft shell tacos, one teaspoon of cooking oil, half of a garlic clove, half of a brown onion, 200 grams of regular mincemeat, half a tin of tomatoes, taco seasoning, four cherry tomatoes, one-fourth of a small corn cob, 50 grams of avocado, and 40 grams of full-fat cheddar cheese.

The plate on the right replaces tortillas with lettuce leaves, uses a tablespoon of water instead of cooking oil, half of a garlic clove, half of a brown onion, 100 grams of extra-lean mincemeat, 70 grams of red kidney beans, one small grated carrot, half a tin of tomatoes, taco seasoning, eight cherry tomatoes, 25 grams of diced capsicum, one-fourth of a small corn cob, 25 grams of avocado, and 10 grams of Parmesan cheese.

Use smaller portions of starches. The burrito on the right is made with a smaller wrap, less cheese, less avocado, no oil, and leaner meat.
Courtesy of Paula Norris

The size of the wrap is one obvious change between these photos, and it accounts for about 100 calories difference. But the other changes can save you an extra 300 calories, Norris wrote on Instagram. Some other differences are that Norris eliminated cooking oil for the burrito on the left, used extra-lean meat, and less cheese.

Norris told INSIDER that she loves adding carrots, zucchini, or fresh and tinned tomatoes to tacos and burritos that use ground red meat. She also added black beans to make up for some of the meat she reduced from the higher-calorie burrito.

The burrito on the left uses a large wrap, one teaspoon of cooking oil, half of a brown onion, 160 grams of regular mincemeat, taco seasoning, half a tin of tomatoes, one cup of lettuce, half of a tomato, 50 grams of avocado, and 40 grams of cheese.

The burrito on the right uses a medium wrap, no cooking oil, half of a brown onion, 100 grams of extra-lean mincemeat, 50 grams of black beans, one-third of a zucchini, half of a medium carrot, taco seasoning, half a tin of tomatoes, one cup of lettuce, half of a tomato, 25 grams of avocado, and 20 grams of low-fat cheese.

Bulk up your meal by adding more non-starchy veggies. 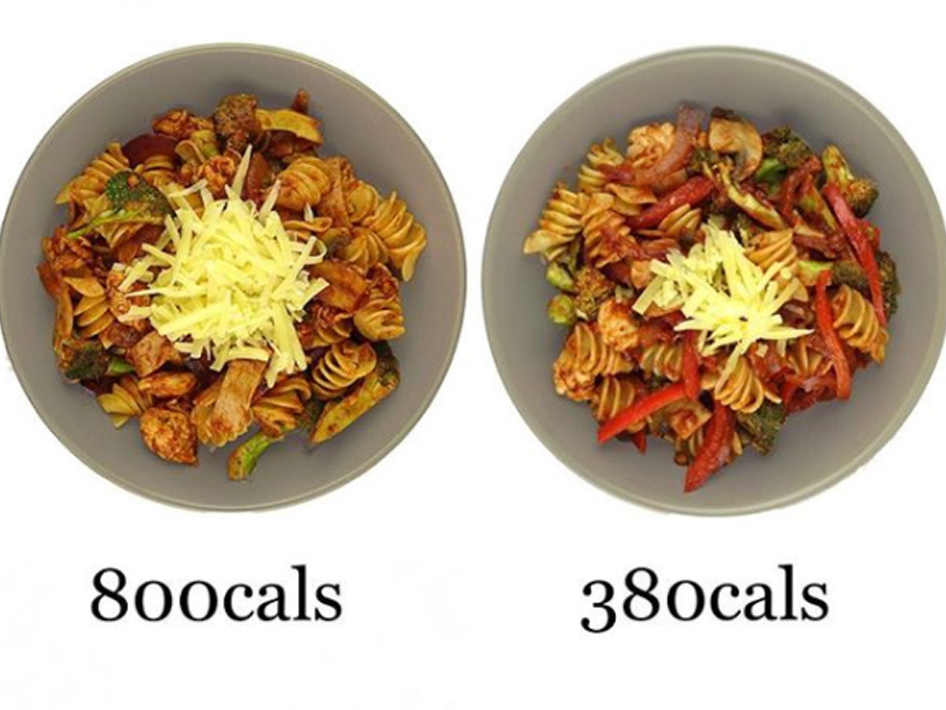 The bowl of pasta on the right contains less chicken, cheese, and pasta, and more veggies.
Courtesy of Paula Norris

If you're cutting down on the portion of the main ingredient in your dish, such as pasta, you can add more veggies to keep the meal filling. The main difference between these dishes is that the bowl of pasta on the right uses less pasta, less chicken, no cooking oil, less cheese, and more veggies.

The dish on the right uses 100 grams of chicken cooked in a little water instead of oil, one cup of cooked pasta, one teaspoon of capers, 10 grams of low-fat cheddar cheese, one-fourth of a large capsicum, four large broccoli florets, and two medium mushrooms. Both recipes contain 100 milliliters of tomato sauce, one tablespoon of tomato paste, one garlic clove, one-fourth of a red onion, two anchovies, and herbs.

Norris' meals show that healthy eating doesn't have to be boring and it definitely doesn't require giving up our favorite foods. It just might require more attention to portion size and a little creativity.