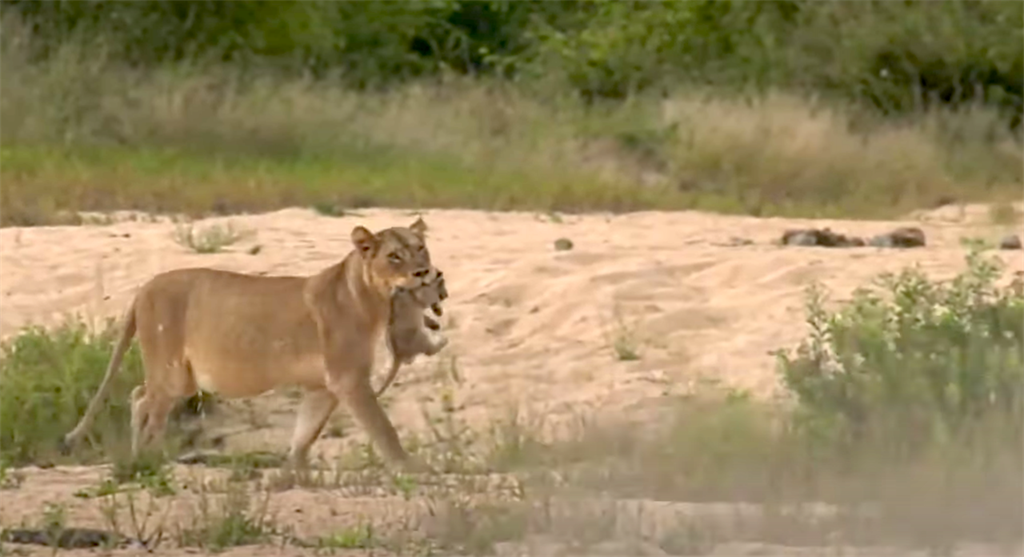 A safari guide from private game reserve andBeyond Ngala was left speechless during a live stream, after spotting a lioness moving her cubs across a dry river bed.

The rare sighting of the lioness with a cub in her mouth also took place before an audience of roughly 28,000, who were tuning in to a live stream of the game drive on YouTube.

For several years a project called Wild Earth has been live streaming safaris like these at reserves throughout the greater Kruger National Park region.

These free live safaris - streamed on YouTube and Twitch - feature game drives that take place in elite private reserves like the Sabi Sands and Timbavati Game Reserve, where Big 5 sightings are almost guaranteed, and a single night’s stay can cost as much as R10,000 per person.

The live safaris have served a new purpose during lockdown. As many as 20,000 people at a time are now tuning in twice a day to watch the spontaneous live wildlife show, which takes place at sunrise and sunset South African time.

The reserves aren’t exempt from South Africa’s strict lockdown conditions - but given that they are located on large tracts of privately-owned land, the staff - which includes rangers, presenters, technical teams, and cameramen - are, in essence, working from home.

Because of this, the live-streamed game drives have continued to operate in a pared-down version throughout South Africa’s hard lockdown period.

But it was the build up to the lion cub spotting that made this a particularly memorable event. andBeyond naturalist Eric Exelby spotted a lone lioness, who he’d suspected to be denning cubs, walking on the road. At this stage it was the type of sighting familiar to regular viewers of the stream.

The lioness is part of the Birmingham Pride, one of the famous lion coalitions of the Greater Kruger.

“She’s looking really nice and full,” Exelby said to the camera. “She’s moving away from a carcass now, which might seem a little bit strange. But this is the lioness who we suspect has got cubs somewhere in the riverbed.”

He and cameraman Marcel followed the lion into the riverbed, where they lost sight of her. Instead, Exelby shifted focus onto a troop of baboons nearby - which seemed a reasonable consolation prize.

Exelby, only on his fifth live stream safari, appeared to have all but resigned himself to having lost the female lion in the river, and remarked that even the baboons were not in any way appearing alarmed.

“We’re just trying to remain as sensitive as we possible can around this lioness, so that she feels that she’s not being put under pressure by us. So if she has disappeared and moved into a bush, that’s the last we’ll see of her this morning,” he said.

But after sharing some insight on the baboons, Exelby interrupted himself excitedly.

“There’s the lioness! Look at the change in the baboons.”

He caught a glimpse of her several hundred metres away.

What unfolded next was the result of some good fortune, experienced guiding, and quick-thinking camera work - that produced a combination of sheer joy and an adrenaline rush often experienced by those on an actual safari.

“Yoh, my heart is racing,” he says as he drives towards where he saw the lioness. “You just have to start thinking, is this the moment that she’s going to show her cubs to us? Oh, goodness!”

But the lion had given the duo the slip once again. The footage cut away to another ranger, only to return a few minutes later with Exelby still in the riverbed.

“We’re just going to sit tight,” he says, looking towards the in-car monitor and trying to ensure the camera operator has the best view. “My head obviously is in the way, it’s such a big head it does get in the way a lot.”

But while he was repositioning, the camera zoomed in on a distant lion staring directly into the lens.

The audibly thrilled guide’s voice served as the perfect backdrop to the footage of the large lioness, who walked carefully across the exposed river bed with her young cub securely in her mouth.

It was a fleeting sighting that clearly thrilled Exelby. In his five years of being a guide, he said later, this was only the second time that he had seen a lioness carrying her cubs like this.

“I can’t tell you how incredible… I’ve gone numb… I’m shaking… I’ve got goosebumps…” he says as the lion disappears from the shot. “I don’t want to show my face! That is just… incredible.”

It takes a while for the sighting to sink in, and a few seconds later he’s still dumbfounded by the spectacle.

“This is drive number five for me, and I haven’t seen a lion with you yet,” he says to the audience of thousands - many of whom have tuned in from countries like the United States, India, and the United Kingdom.

“I just wanted to make the first one a special one, and we’ve been able to do that,” he says. “I’m so glad we got to share this moment with all of you!”

Watch the full sighting here, about two hours into the game drive: