Offshore wind farms in 3 spots could supply all of SA’s electricity – 8 times over, academics find A new study by Stellenbosch University academics found that offshore wind farms could potentially supply all of South Africa’s electricity – more than eight times over.

These spots are outside of protected marine areas. 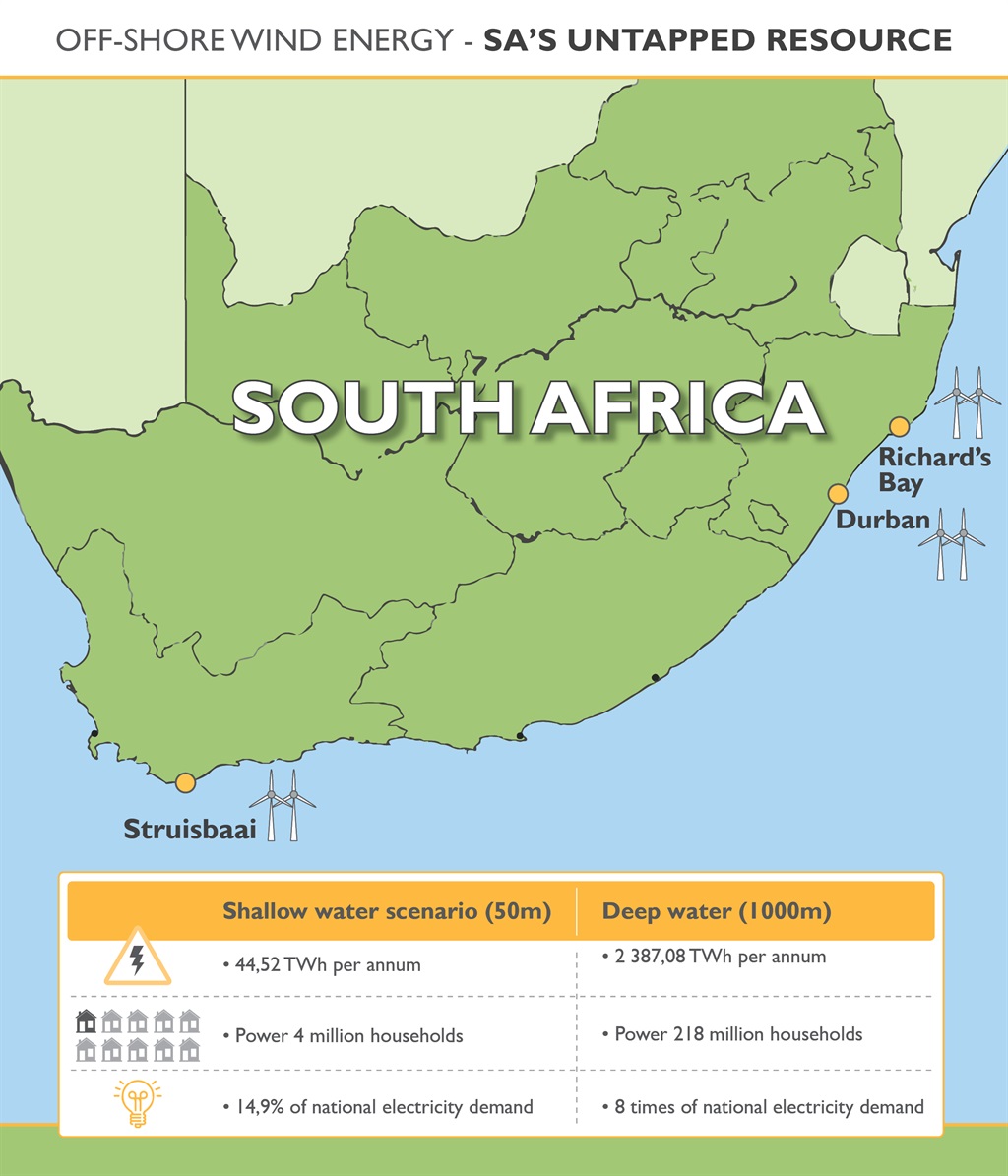 “If we were to install wind turbines at different depths off the KwaZulu-Natal and Western Cape coast, they could potentially supply approximately 15% and 800% of South Africa’s annual electricity demand,” the researchers found.

Wind farms in only the shallow areas, close to coastlines, have the potential to supply 15% of South Africa’s national electricity demand – or power to four million households.

According to the American Geosciences Institute, offshore winds tend to be faster than on land, which means that offshore-wind farms may be able to generate more energy than land-based wind farms. According to the institute, a turbine in 24km/h wind can generate twice as much energy as a turbine in 19km/h wind. Offshore wind is also usually more stable than land wind, which means a more reliable source of energy.

But Rae and Erfort say that South Africa is still lagging behind in the development of offshore wind energy at a time when there is big growth in Europe and Asia.

“Although the Renewable Energy Independent Power Producer Procurement Programme was launched in 2011 to procure renewal energy projects, it is yet to exploit or consider the abundance of offshore wind energy resources available.” By tapping into these resources, South Africa could also decrease its carbon emissions significantly, they believe.

Their report, which quantifies these resources, could help to develop the local market for offshore wind energy.

Last year, the Swedish floating windfarm developer Hexicon became one of the first companies to express interest in offshore wind in SA. It launched a new join venture with a local company to explore the possibility of generating electricity from offshore wind in South Africa.

Hexicon is currently working with Shell to build what could eventually be the world’s first large scale floating wind farm in South Korea.

Related Links
Eskom needs R1 billion a week from government to keep the lights on in 2021
Some SA households can get free electricity – how to apply
New Eskom price plans: Some relief for households that use lots of power
Next on Business Insider
Entrepreneurs, designers, inventors and product developers can get grant funding of up to R800,000