SA’s new plugs and sockets – what you need to know

Amid concerns about the growing use of power adaptors – and adaptors plugged into adaptors – the South African Bureau of Standards (SABS) has urged South Africans to adopt a new range of plugs and sockets.

While over recent years 21 different types of plugs have been introduced in South Africa, most buildings still contain the old large three-pin sockets.

South Africa adopted these plugs, known as the SANS164-1, from the British in the 1950s: The old three-pin plug which South Africa has been using for decades.

The sockets for these plugs can't accommodate cellphone chargers and other two-pin plugs. This means South Africans are using more adaptors – increasing the risk of fires, short circuiting and damage or malfunction of appliances, SABS says.

In 2018, SABS introduced the new SANS 164-2 plug which has three pins, including an earth pin to protect the users from electric shock. The new plug can handle appliances with the same wattage as the old three-pin plug. But because the new plug is much smaller, its socket can accommodate more plugs in the same space. It also works with the so-called "Europlugs" - two-point plugs used across Europe. This should curb the use of power adaptors.

By law, all new buildings have to be fitted with SANS 164-2 sockets. These sockets can also include the old three-pin plugs, but they must include the new SANS 164-2 plugs too and may have switches.

While fitting traditional sockets in existing buildings is not illegal, SABS is urging South Africans to adopt new sockets, which incorporate all kinds of plugs, and are now available.

The new sockets have switches for all plug types, including USB ports: 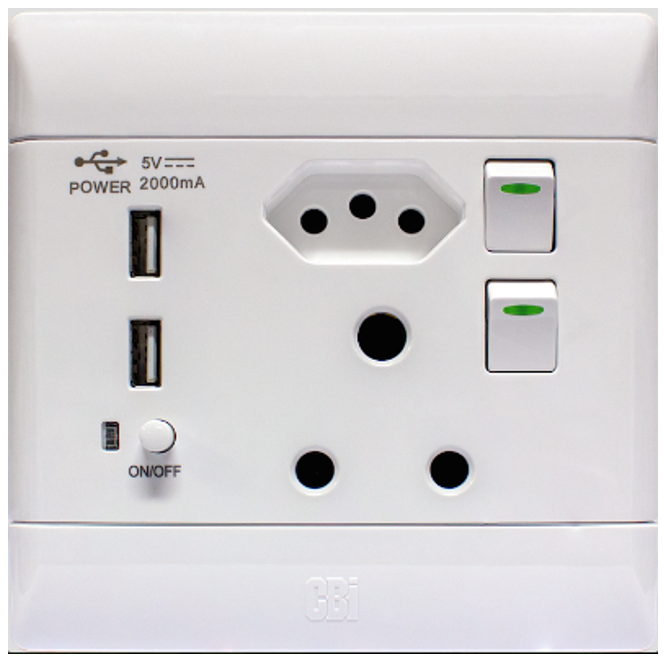 A socket which accommodates the new SANS 164-2 plug, the old three-pin plug and USB ports - along with switches for each. Source: SABS A socket for the new SANS 164-2 plug, the old three-pin plug as well as for a round two pin-plug. Source: SABS “Every new building should have these new SANS 164-2 type of sockets and all appliances should be fitted with the new plugs,” says Gianfranco Campetti, chairperson of the technical committee responsible for the development of SANS 164 series of standards.

“South Africa has been lagging with the implementation of these global changes and the continued use of adaptors onto adaptors will just lead to more dangerous electricity usage and malfunctioning of appliances.”

Recently, a compulsory new symbol was introduced that needs to be embossed on all adaptors.

The symbol warns users that adaptors are not permitted to be plugged into one another: This is due to a safety risk to the consumer as the straining of the socket-outlet can cause a short-circuit between the neutral and live pins, the SABS said.

All plugs and sockets are regulated products in South Africa, and the National Regulator for Compulsory Specifications (NRCS) – which regulates these products - has mandated the SABS standards.

South Africa must accommodate many different kinds of plugs from importers, because the local market is too small to insist on one standard, says Campetti.