South Africans struggling with the ongoing alcohol ban under lockdown can look no further than social media, where alcohol and cigarettes are being cheekily advertised as "props" in  ads that are ostensibly for other products.

A cursory search on Facebook marketplace brings up various listings for “grape juice” and “cooldrinks”. Or look for items, such as sunglasses, which are being offered for free – just ignore the bottles of wine in the background. There are also a couple of ads for glasses, which appear to be for the liquid inside them instead, as well as for a "wine rack". 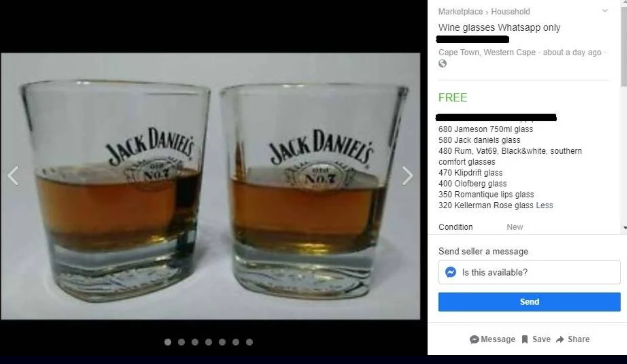 It’s not just alcohol. Cigarettes are also advertised in similar fashion, with users advertising items such as tomatoes and paper towels, which are placed conspicuously near cartons of smokes.

Here are some of the ads we found on Twitter: Alcohol sales were banned for a second time on 12 June, while the sale of cigarettes has been prohibited from the start. That’s led to a huge rise in smuggling, with neighbouring countries such as Namibia reporting cigarette shortages, despite importing more cigarettes in May than the country consumes in a year.

READ| Namibia should have a huge pile of cigarettes. Mysteriously, they are nowhere to be found.

We’re going to assume that these adverts are tongue-in-cheek, and merely poking fun at the desperation of South African smokers and drinkers under lockdown.