Russia has just built a huge cathedral in honour of its military to commemorate 75 years since the end of WWII.

Its full title in English is: The Resurrection of Christ Cathedral, the main Russian Orthodox Cathedral of Russian Armed Forces.

The cathedral is about 34 miles (54 km) west of Moscow in a complex called Patriot Park. 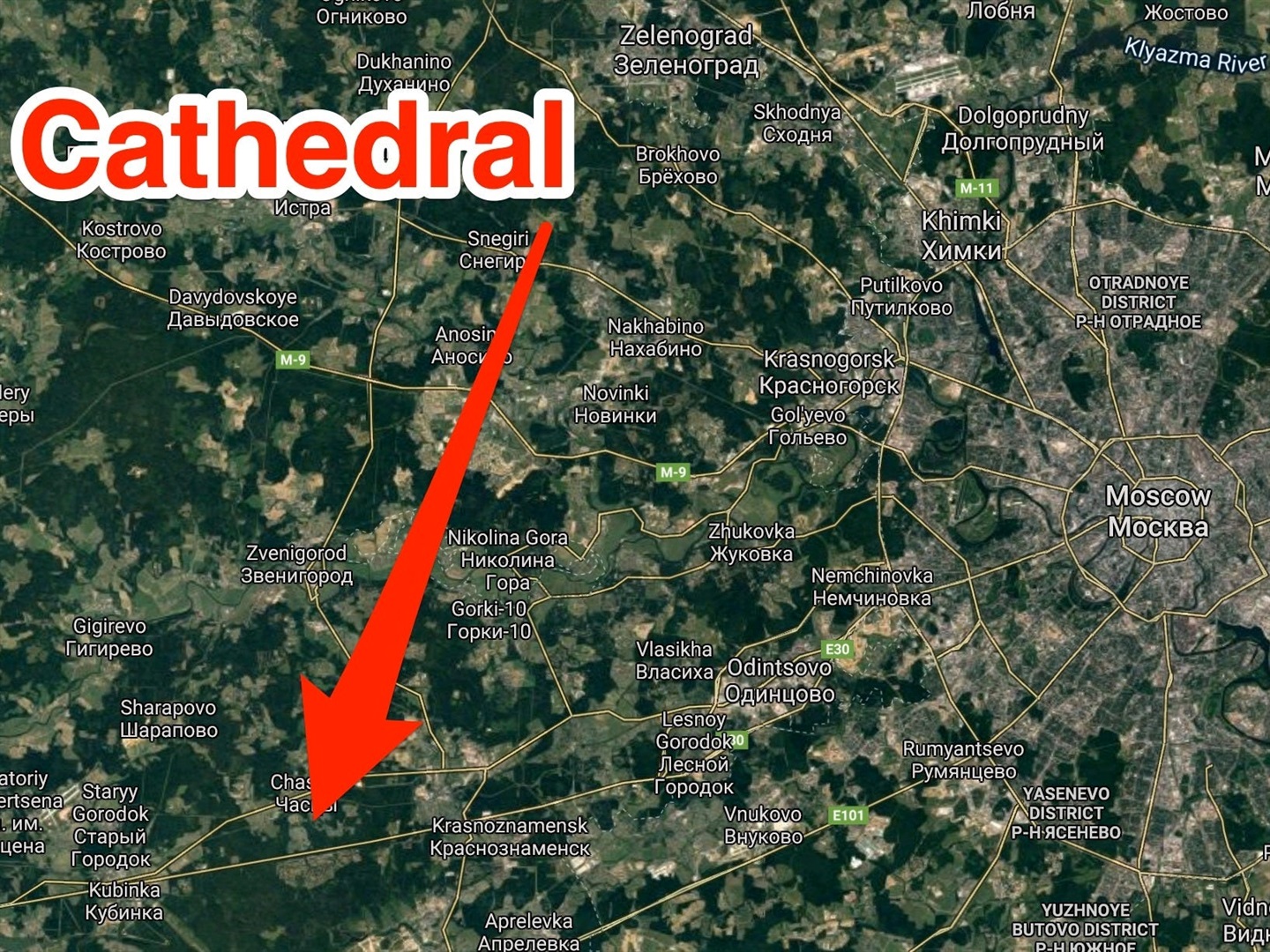 Each of its four chapels is dedicated to a different patron saint of the branches of the Russian armed forces - the aerospace forces, the missile forces, the navy and the land army.

It was built in just under 600 days, but was slightly delayed due to the coronavirus pandemic.

It was supposed to be consecrated on May 9, which is Victory Day in Russia, but due to the coronavirus this was rescheduled to June 14, according to Radio Free Europe.

The building is said to have cost $82 million (R1.4 billion). The cathedral says around half of this came from donations.

According to the independent news outlet Znak.com, another $42.5 million (R736 million) came from Moscow public funds.

The cathedral was consecrated on June 14 with a large-scale military and religious ceremony.

Masks and social distancing were markedly absent, as was the case at Russia's massive military parade on Victory Day in central Moscow.

The cathedral serves the Russian Orthodox faith, the most widespread religion in the country.

Here is an interior view of the construction work inside the cathedral. Here's another scene from the consecration, featuring a massive mosaic of the Virgin Mary and child.

This is an important project for Putin, who visited on June 22 — three days before Russians set out to vote on major constitutional reforms that will likely consolidate his power.

When he announced the project in September 2018, Putin said it would be "one more symbol of the indestructibility of our national traditions, of our loyalty to the memory of our forefathers and their achievements," according to The Times of London.

Over his 20 years as either Prime Minister or President of the Russian Federation, he has long glorified the military.

The constitutional reforms could potentially see Putin remain leader until 2036.

The proposed reforms would limit a president's rule to a total of two six-year terms (Putin is currently on his fourth).

However, it would also "reset the clock" on Putin's own rule, the BBC reported, potentially giving him another 12 years beyond the end of his current term in 2024.

The final day of voting will be July 1.

Some religious figures have condemned the mixing of religion and military.

Critics such as Andrey Kuraev, a former high-ranking clergyman who was expelled from the church, told Al-Jazeera that the cathedral was built to glorify a secular "cult of victory."

It's not the only controversy around the cathedral.

The cathedral became mired in controversy in late April when pictures emerged of a mosaic depicting Putin himself adorning the walls.

The mosaic showed Putin alongside defence minister Sergei Shoigu and other top officials.

Another part of the mosaic showed a group of women with the words "Crimea is ours" above them, according to the Independent.

This was in reference to the Russia's annexation of the Crimean peninsula of Ukraine in 2014.

The Orthodox church defended the mosaic as depicting one of many historical scenes, but ultimately it was cancelled. A church official said on May 1 that the mosaic was ditched at to Putin's request, according to The Guardian.

A Kremlin spokesperson said: "Someday our thankful descendants will appreciate our merits, but it's too early to do so now," the paper reported.

On the left is Defense Minister Sergei Shoigu at the consecration. When the project was announced in 2018, he said the steps would be made from "German trophy hardware," according to The Times.

This has been widely reported as having been made from Nazi tanks. The BBC dubbed it a "Game of Thrones" cathedral, in reference to the series' Iron Throne made of the swords of defeated enemies.

Metals feature heavily throughout the building's construction, such these doors. Here is a worker helping to install intricate ornamentation to be hung from the ceiling during the cathedral's construction. This mosaic of Christ's face, shown here during construction, is known as the Savior-Not-Made-By-Hands. It adorns the entire underside of the cathedral's biggest dome. 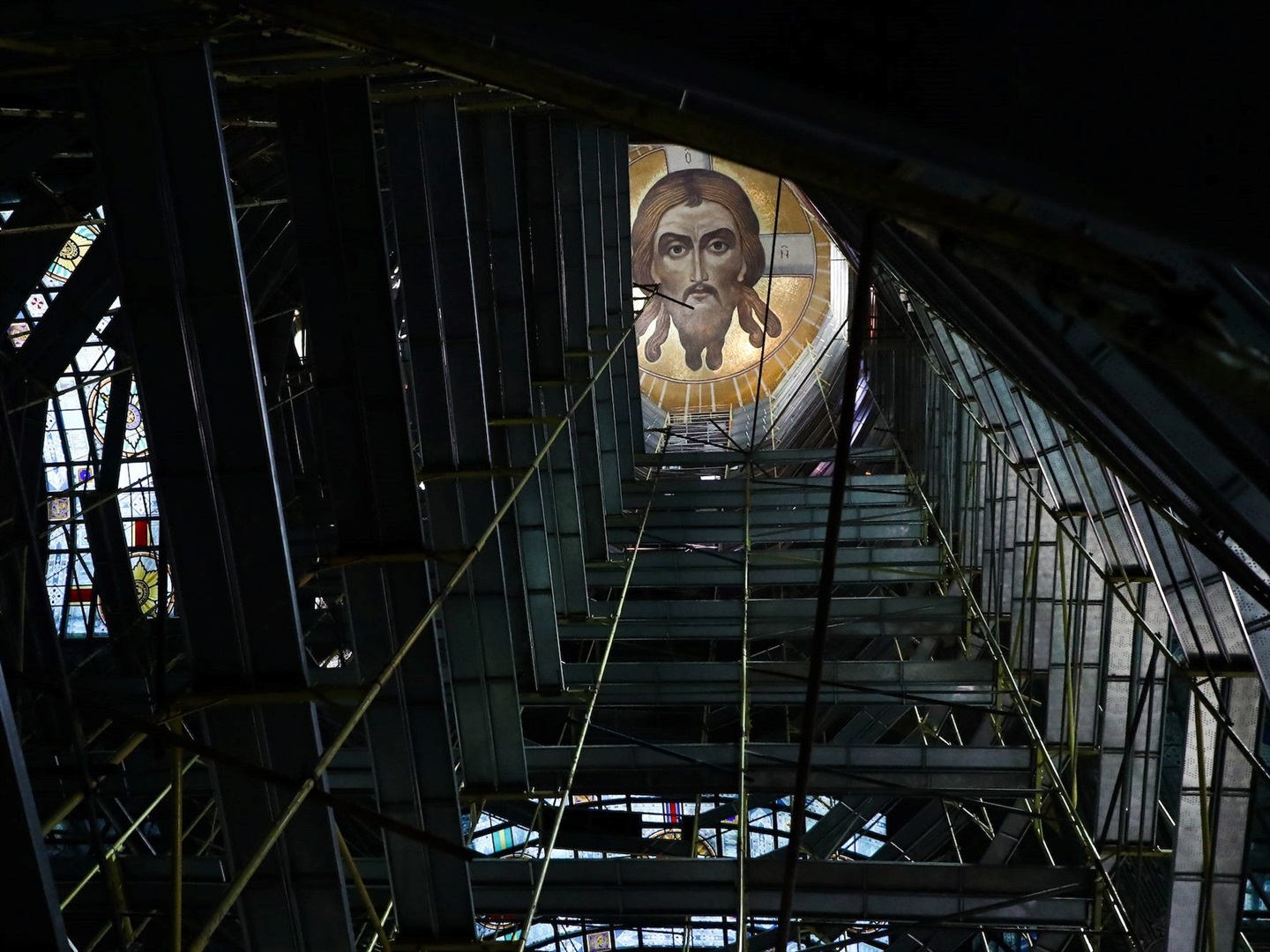 Other lavish decorations appear throughout.