'Our toehold in space is at extreme risk': Russia's rocket failure has thrown astronaut access to the International Space Station into limbo A three-module Soyuz spacecraft.
An astronaut and cosmonaut survived a harrowing mid-flight failure of a Russian Soyuz rocket on Thursday morning.

But human access to space is now on hold indefinitely while authorities investigate the launch failure.

After NASA retired its space shuttle fleet in 2011 without a replacement, the US was left without its own spaceship to fly people to and from the International Space Station (ISS).

SpaceX and Boeing are building new commercial spaceships for NASA to ferry astronauts and cosmonauts to and from the floating laboratory, but those vehicles aren't finished. The soonest they might fly people is mid-2019, and approval for standard crewed missions may not come until the end of next year.

So for the past seven years, the US, Russia, Europe, Japan, and others have relied on one, and only one, viable crewed launch system: the Soyuz, which is now grounded until further notice.

"The Soyuz has been a reliable workhorse we could count on to safely deliver crews to the ISS," Wayne Hale - an engineer, rocket accident investigator, and a former NASA space shuttle director - told Business Insider in an email.

He added: "Until the cause of this failure can be determined and corrected this puts our toehold in space at extreme risk."

That toehold is the space station, which has been occupied by crew members continuously for nearly 18 years.

The big bright spot, say Hale and other spaceflight experts, is that Russian cosmonaut Alexey Ovchinin and NASA astronaut Nick Hague, who were on board the rocket when it failed, actually survived.

"This isn't a surprise to astronauts. All machines fail eventually. The real question is, are you ready for your machine to fail or not?" Chris Hadfield, a retired astronaut who's flown the Soyuz to space, said in a live Periscope broadcast on Thursday morning.

Hadfield, who last flew aboard a Soyuz in 2013, added: "The beauty is it shows everything worked. The crew's fine. The crew didn't get hurt. All the systems that were there in case of a rocket failure worked. It's not what you want to happen, but it happens."

What went wrong during the Russian rocket launch The Soyuz MS-10 rocket is rolled out by train to the launch pad, Tuesday, Oct. 9, 2018 at the Baikonur Cosmodrome in Kazakhstan.
Bill Ingalls/NASA

On Thursday morning, Ovchinin and Hague stuffed themselves into a tiny space capsule atop a 46-metre-tall rocket.

The Soyuz MS-10 spacecraft system, as the rocket and capsule is called, lifted off from a launch pad in Kazakhstan around 4:40 a.m. EDT and zoomed toward space.

But about two minutes after liftoff, when the rocket was mostly out of sight from the ground, a second-stage booster on the rocket failed as four large side boosters were being jettisoned.

This is the moment of today's Soyuz rocket failure. It happened as the 4 side boosters were being jettisoned. That's where the investigators will be looking. pic.twitter.com/97mVV6xhi3

That's when an "ABORT" light appeared in the cabin and, about a second later, the system automatically ejected the capsule, Kenny Todd, the space station's Mission Operations Integration Manager, said during a press briefing on Thursday.

Todd couldn't say whether the second-stage rocket exploded or simply lost thrust, but estimated the crew ejected about 30 miles above Earth, which is halfway to the edge of space.

"The automated systems kicked in. The system knew the rocket wasn't providing the acceleration it was supposed to, so it ejected or deployed the Soyuz off the top," Hadfield said. "The little capsule came tumbling down, got itself pointed the right way, deployed its parachute, and lowered the crew down to the ground." During the first leg part of its 34-minute journey back to Earth, the capsule entered what's called a ballistic descent - essentially the equivalent of falling out of the sky like a stone thrown into the air.

This is risky because the capsule isn't on a path to best use Earth's atmosphere to gradually slow down.

"If you're ballistic, you're just falling. When the air gets thick, it's sort of like hitting water, and you get squished up to 8G or more," Hadfield said, referring to a force eight times the strength of Earth's gravity at the surface. "It's a safe but much more rugged way to enter."

The crew was weightless for a moment, but their rigorous training had prepared them for a worst-case scenario like this. That hard work leading up to the launch is why Hadfield thinks the crew probably felt more disappointed than scared.

"Their main reaction would have been one of frustration, and probably anger, because they've been training a long time to get ready for this launch, and to have the rocket fail means they're not going to space today," Hadfield said. "The good news is that they're safe."

Reid Wiseman, a NASA astronaut who works on the ISS program, said during Thursday's press briefing that his "heart was beating hard" when he saw the abort.

"'I hope they get down safe.' That was the only thing going through my mind," Wiseman said.

Roscosmos is looking into the failure that led to aborting the mission. Some Russian media outlets are even reporting that a criminal investigation has been launched, perhaps in light of drill holes recently discovered on a Soyuz spacecraft docked to the ISS. A view of the Soyuz MS-10 failure from space on October 11, 2018.
Alexander Gerst/ESA/NASA via Flickr

German astronaut Alexander Gerst was photographing the launch from aboard the ISS when the Soyuz failure occurred. He managed to capture a view of the capsule as it ejected from the rocket.

"Glad our friends are fine," Gerst, who is the ISS commander, said in a tweet after the launch. "Today showed again what an amazing vehicle the Soyuz is, to be able to save the crew from such a failure. Spaceflight is hard. And we must keep trying for the benefit of humankind."

Gerst is currently living aboard the space station with NASA astronaut Serena Auñón-Chancellor and cosmonaut Sergey Prokopyev, and the plan for the crew is now uncertain.

What will happen to the 3 people on board the space station? 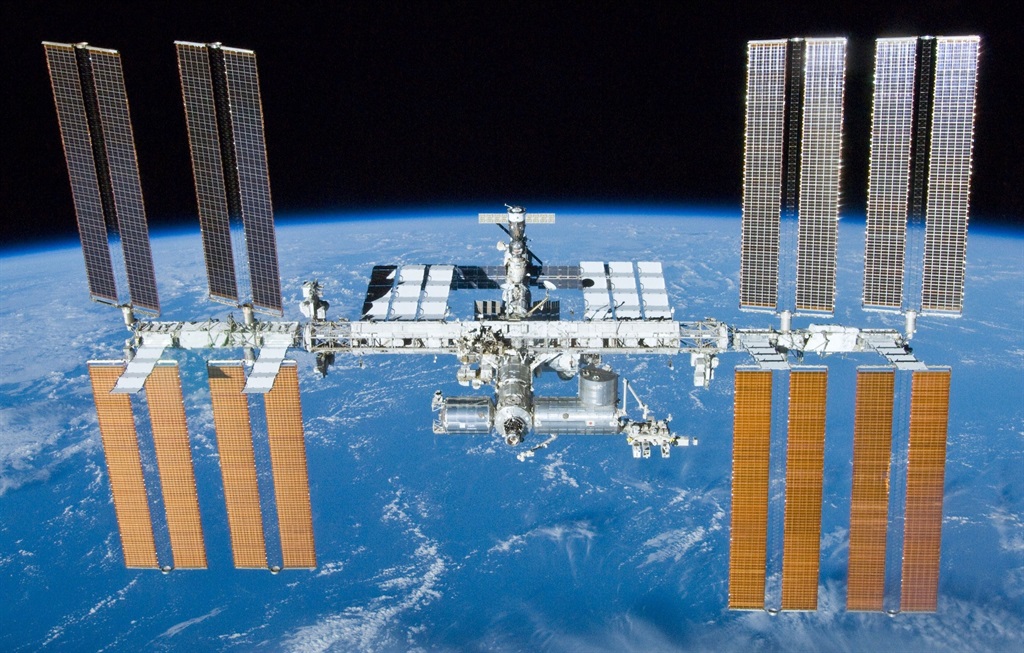 No one is certain exactly what the plan is yet for Auñón-Chancellor, Gerst, and Prokopyev, who were scheduled to return to Earth in December.

"It could be many months," Hadfield said. "They're basically marooned there, indefinitely at this point, until we can get another vehicle that can get up there."

This is only true in terms of keeping the ISS staffed. The crew does have another Soyuz spacecraft attached to the space station, and they can board it to evacuate - either in an emergency or at the direction of mission control.

But that Soyuz "lifeboat" spacecraft only has a roughly 200-day shelf life in space.

"There's a little bit of margin on the other side of that, but not a lot of margin," Todd said.

Since the Soyuz lifeboat arrived in June, this means the crew might be forced to evacuate in January, Todd said. This is more likely to happen if a Soyuz that's scheduled for launch in December doesn't fly as planned. (The next Soyuz flight after that is currently scheduled for April.)

For its part, NASA and its partners want to keep the crew on board the space station as long as possible. Wiseman said he spoke to the crew Thursday morning and that they're prepared for whatever comes next.

"They're ready to serve at the will of the program," Wiseman said during the press briefing. "They will stay up there as long as they are needed to."

Wiseman and Todd said the ISS has plenty of supplies, with more on the way from cargo ships like SpaceX's Dragon.

But if it comes to it, they said it can be fully evacuated and operated remotely for some time, especially given several redundant systems.

"We could tolerate some significant failures and continue to operate," Todd said, though science experiments that crew members run aboard the station would be affected.

Why can't Boeing and SpaceX step in to help? Although SpaceX's Crew Dragon and Boeing's CST-100 Starliner spacecraft are nearing completion as part of NASA's Commercial Crew program, they're not yet ready for primetime. The earliest NASA is willing to test-launch either ship with astronauts on board is a very fuzzy mid-2019.

NASA administrator Jim Bridenstine said in a statement on Thursday that "a thorough investigation into the cause of the incident will be conducted." But Roscosmos didn't provide an estimate on how long a Soyuz-failure commission will take to conclude its work.

Equally uncertain is what fixes might need to be made to Soyuz - and Russia's Progress cargo spaceships, which use the same rocket system - and how long those alterations might take.

If the Soyuz failure takes months to ascertain and fix, though, it could actually end up further delaying SpaceX and Boeing's first crewed test-launches.

That's because NASA requires a crew on the space station in case anything goes wrong with docking operations of the Crew Dragon or Starliner.

"The space station is a $100-billion asset to the world," Todd said. "Having a crew on board and being able to monitor these crews as they approach, it's certainly important."

In any case, Hadfield said this is not the end of Russia or NASA's space programs.

"If your car has an engine failure, are you never going to drive a car again? Of course you are," Hadfield said.

John Logsdon, a space policy expert, author, and spaceflight historian at George Washington University's Space Policy Institute, says he is not surprised by the pickle that NASA and its partners are now in.

"We conducted an unstable space policy, in terms of space transportation. In retrospect, you could argue we retired the shuttle prematurely. In retrospect, you can argue Congress didn't not provide adequate funding to Commercial Crew in its early years, and that's delayed it by two to three years," Logsdon said. "You can't live life backwards, but we're kind of paying the price for less-than-stellar decisions."