A day in the life of a Russian diamond miner in Siberia, who wakes up at 5:30 a.m., spends 9 hours a day in the mine, and gets 76 vacation days per year Innokentiy Nogovitsyn works in Alrosa's International mine outside of Mirny, Russia.
Innokenty Nogovitsyn

Innokentiy Nogovitsyn is a diamond miner in Siberia for Alrosa, the world's largest diamond producer by volume.

Nogovitsyn lives in the town of Mirny, a diamond mining town in Russian Siberia about 280 miles (450 kilometers) from the Arctic Circle, where most of the town's roughly 40,000 residents work for Alrosa.

His job is to monitor methane levels, air flow, and temperature in the mine.

On a recent trip to Russia, I had the chance to tour Alrosa's facilities and meet Nogovitsyn, who has been working as a miner for eight years. While he didn't speak English and I don't speak Russian, a translator helped me understand what a day in his life generally looks like. I wasn't able to follow Nogovitsyn into the mine for safety reasons, but we met at a hotel café in Mirny, and he later sent me photos taken by himself and his fellow miners.

Here's what a typical day looks like for Nogovitsyn as a diamond miner in Siberia. Nogovitsyn lives in Mirny, a diamond mining town in Siberia about 280 miles (450 kilometers) from the Arctic Circle.

Mirny has been called a "mono-city" because most of the town's roughly 40,000 residents work for Alrosa.

Nogovitsyn lives in an apartment in Mirny with his wife and their two children: an 8-year-old daughter and a 5-year-old son. Nogovitsyn usually wakes up at 5:30 a.m.

At 6:15 a.m., Nogovitsyn catches a bus to the mine where he works, called the International mine, just outside of Mirny. It's about a 30-minute bus ride to the mine. The International mine, which is about 10 miles (16 kilometers) from Mirny, opened in 1999. The International mine is open 24/7, with miners rotating through morning, evening, and night shifts. It produces the world's largest content of carats per tonne of ore: seven carats of diamond per tonne of ore.

Before every shift, Nogovitsyn and all the other miners get a medical check. Their blood pressure and heart rate are measured, and they get checked for any alcohol or drugs in their blood.

"We are living in Russia, so you have to face it that some people just cannot live without alcohol," an Alrosa spokesperson, Diana Petrenko, told Business Insider. "Some people try to sneak it in. So to make sure there are no people taking in alcohol, they test twice, on the way in and on the way out."

If an employee is caught with alcohol, they're immediately fired, Petrenko said.

At the mine, it's said that nobody is irreplaceable.

Before their shift, the miners eat a buffet-style breakfast in the workers' canteen. Alrosa provides a stipend that covers all of the miners' meals in the canteen. After breakfast, the miners are assigned their particular job for the day, and then they have five minutes to change into their uniforms. The uniforms include headlamps, safety helmets, and sturdy boots.

After everyone is dressed, it's time to head down into the mine. Nogovitsyn said that during one shift, there are about 100 people in the International mine.

The miners take an elevator down into the depths of the mine. The deepest point of the mine is about 0.62 miles (one kilometer) deep.

To ride the elevator from the surface to the bottom of the mine takes about 15 minutes, Nogovitsyn said.

In the mine, Nogovitsyn's job is to monitor methane levels, air flow, and temperature. He walks throughout the mine all day monitoring the air. In one shift, he said he walks an average of about 9 miles, or 15 kilometers.

Thanks to a ventilation system that pumps in warmed air, the mine stays at a consistent temperature — even throughout Siberia's harsh winters. Nogovitsyn eats lunch down in the mine. 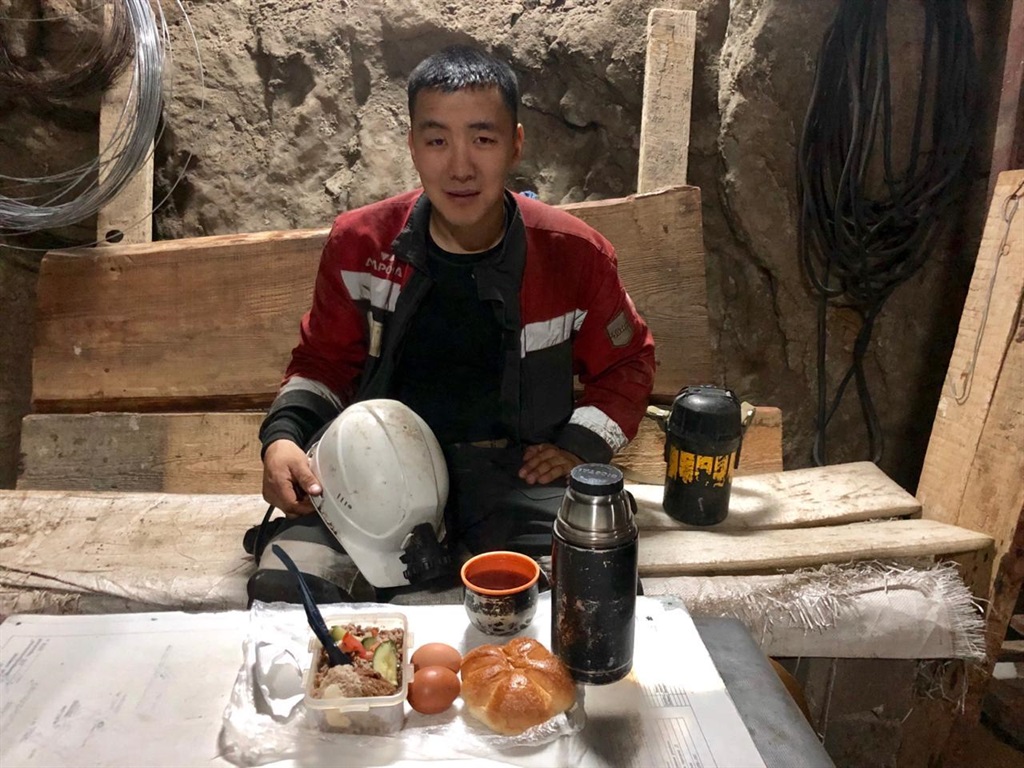 The miners usually pack containers of food from the canteen to eat for lunch. 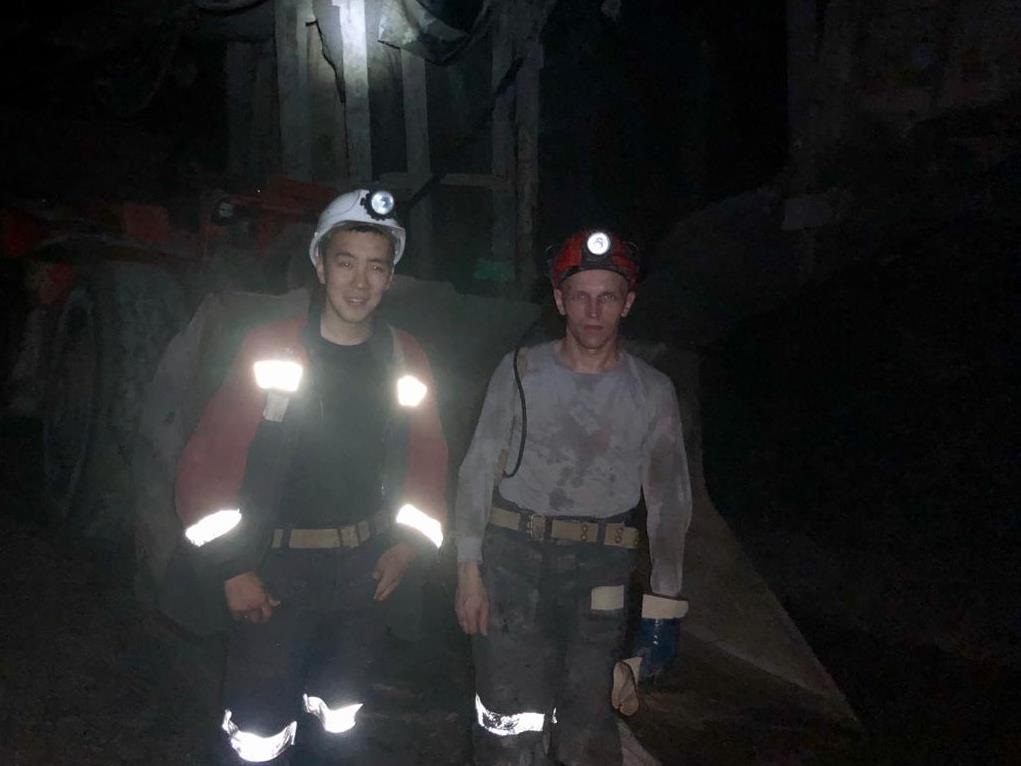 At the end of his shift, Nogovitsyn has to write a report and get another quick medical examination, this time just checking for any alcohol in his system.

In his free time, Nogovitsyn spends time with his family. After he gets home, Nogovitsyn typically does a workout or takes his kids to play in the park, and then he eats dinner with his family.

Nogovitsyn gets 76 paid vacation days per year, which, he said, he often spends cycling hundreds of miles across Russia and Europe. Throughout the year, Nogovitsyn typically works four days in a row followed by one or two days off.

He works on this schedule for several months and then takes all of his 76 vacation days at once. He said he usually spends half of that time with his family and half of that time embarking on hundreds of miles-long cycling trips across Europe and Asia, often accompanied by his friend and fellow Alrosa miner, Danil.

He has cycled through countries including France, Norway, Vietnam, Cambodia, Laos, Malaysia, and Singapore. Some years, instead of cycling, Nogovitsyn will spend half of his vacation days on hunting or fishing trips with Danil.

According to an Alrosa spokesperson, in Russia, diamond mining is classified as a dangerous profession, which is why the miners get so many vacation days.

Related Links
Russia's new high-altitude drone just flew for the first time, and they want to arm it with one...
Putin's rush to build doomsday weapons able to devastate the US is likely to end in more...
The blast that killed 5 Russian engineers was apparently caused by another failed test of Putin's...
Next on Business Insider
North Korea's Covid crisis spiraling out of control - 1.4 million people now suffering from 'fever'