Russia came out the winner of this year's G7 summit despite being kicked out, and Trump looked like 'Putin's puppet' The prevailing takeaway from this year's G7 summit was that it resulted in little progress on many of the most pressing problems the global community faces.

At the conclusion of the meeting, members agreed to endorse just a one-page document, and the summit ended with no tangible commitment on issues like Iran, global warming, and trade.

But there was one country that came away from the summit with significant gains: Russia. That's thanks to President Donald Trump, who lawmakers and experts say behaved more like Putin's ambassador than as the US president.

Trump's defense of Putin was all the more noteworthy given that Russia isn't even in the G7. It was booted from the group - known as the G8 at the time - in 2014 after it violated international law by annexing Crimea from Ukraine.

Since then, Russia has done little to make up for its actions; if anything, it's stepped up its aggression. In addition to continuing to encroach on Ukraine, the Russian government interfered in the 2016 US election and was behind the attempted assassination of a former Russian spy in the UK.

Russia is also a key ally for Syrian president Bashar al-Assad as he slaughters his own people in a brutal civil war, and in recent months, it's begun cozying up to other rogue regimes like Iran and North Korea. US officials also warn that as the 2020 election looms, the Russians are stepping up their cyber activities against the US and that they've repeatedly tried to attack US power grids.

So it stunned G7 members when Trump went to bat for Russia during the summit and aggressively lobbied for its readmittance.

US allies balk at Trump's defence of Putin

"I think it would be better to have Russia inside the tent than outside the tent," Trump said on Monday. He added that Russia was "a good member of the G8" and that the world is better off with Russia "inside rather than outside".

The president also said on Sunday that the effort to readmit Russia was a "work in progress" and said "we have a number of people that would like to see Russia back". He refused to say who else supported the idea.

In fact, according to multiple media reports, Trump faced significant blowback from other G7 members when he raised the idea at a private dinner on Saturday night.

The Washington Post reported that the meal began cordially, with a discussion of the wildfires in the Amazon, and then moved on to addressing Iran's nuclear threat. But Trump reportedly jumped in and raged against the other leaders for not including Russia.

His message was essentially that "it doesn't really make sense to have this discussion without Putin at the table," one European official briefed on the dinner told the Post.

Nearly every other leader at the table immediately shot down Trump's suggestion, saying Russia had done nothing to account for its actions and did not deserve to be readmitted. 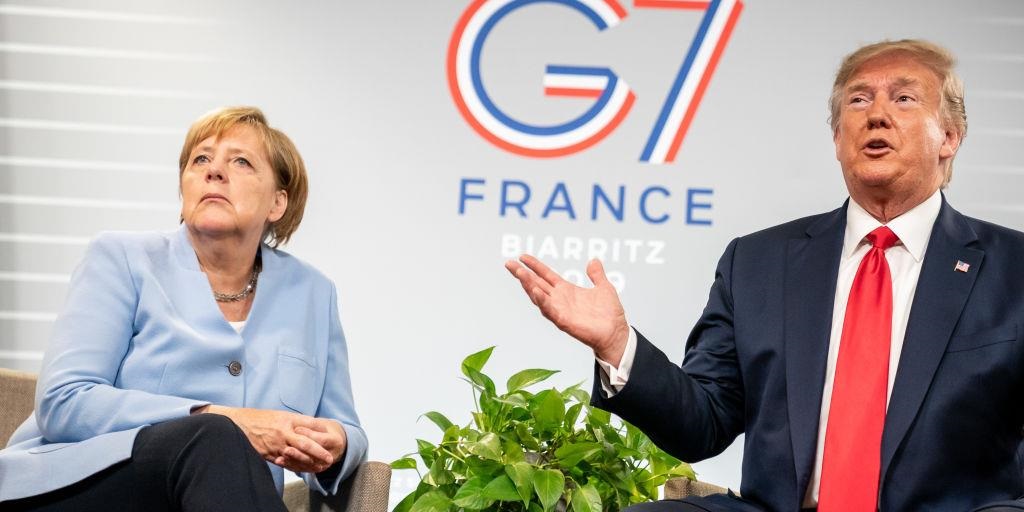 One Russia expert noted that the country's state-run media reacted to Trump's G7 performance with laughter and mockery. And according to the Post, one show on the Rossiya-1 network played a celebratory soundtrack as it showed six video clips of Trump demanding that Putin be given a seat at the table.

Russian officials had a more measured response: Dmitry Peskov, Putin's spokesperson told the state-run Interfax news agency, "Russia does not reject any communication formats, but is not going to push its participation on anyone."

One Republican lawmaker, who requested anonymity to candidly discuss Trump's actions, told Insider that his performance at this year's summit was "a slap in the face" to the US and its allies.

"He looked like Putin's puppet," the lawmaker added. This person noted that Trump's comments were all the more troubling given that Russia hadn't requested that the US lobby on its behalf or offered anything in exchange.

"Putin comes out of this holding all the power," they said. "It was embarrassing."

At the end of the summit, when asked about Russia's annexation of Crimea, Trump fell back on a familiar line of attack: Blaming his predecessor.

He added that Obama wanted Russia kicked out of the G7 because Crimea's annexation was "very embarrassing" to him. Indeed, Trump repeatedly talked about how Crimea was "taken away," but adamantly refused to say who "took" it in the first place.

Trump also said he would "certainly invite" Putin to next year's G7 summit as his guest. But he said Putin might "psychologically" not want to attend after Russia was kicked out of the group.

Ned Price, the former senior director of the National Security Council under Obama, told Insider that the relative lack of "petty antics and last-minute drama" from Trump at this year's summit "put on even starker display just how isolated and enfeebled America under Trump has become on the global stage."

"On issue after issue, Trump was the outlier who couldn't manage to find common ground with countries that are supposed to be among our closest and most ideologically-aligned allies," he said. "Whether the issue was climate change ... Iran, China, tariffs, or Russia, America was a party-of-one."