A burnt-out car is seen on the street after a missile launched by Russian invaders hit near the Kharkiv Regional State Administration building in Svobody (Freedom) Square) at approximately 8 am local time on Tuesday, March 1, Kharkiv, northeastern Ukraine, on March 1, 2022, in Kharkiv, Ukraine.

Announcing the strike on Telegram, Kharkiv Region Head Oleg Synegubov said that "After a war crime in Mariupol [referring to the Russian strike on a Mariupol maternity hospital], today the enemy hit the Oskil psychoneurological boarding school with a direct hit."

Sixty-three of the home's 330 residents were evacuated, while the fate of the other 267 is currently unknown, reported the MailOnline.

A number of the home's residents were severely disabled, with Sinegubov saying that 50 of the residents were "sedentary," and ten were in wheelchairs.

The Telegraph reports that many staff and patients hid in the bomb shelter. However, they noted that the direct hit on the five-story building did not kill anyone.

Several organisations have called for additional support for disabled residents of Ukraine, who are often unable to flee the country — or even get into bomb shelters — due to inaccessibility. 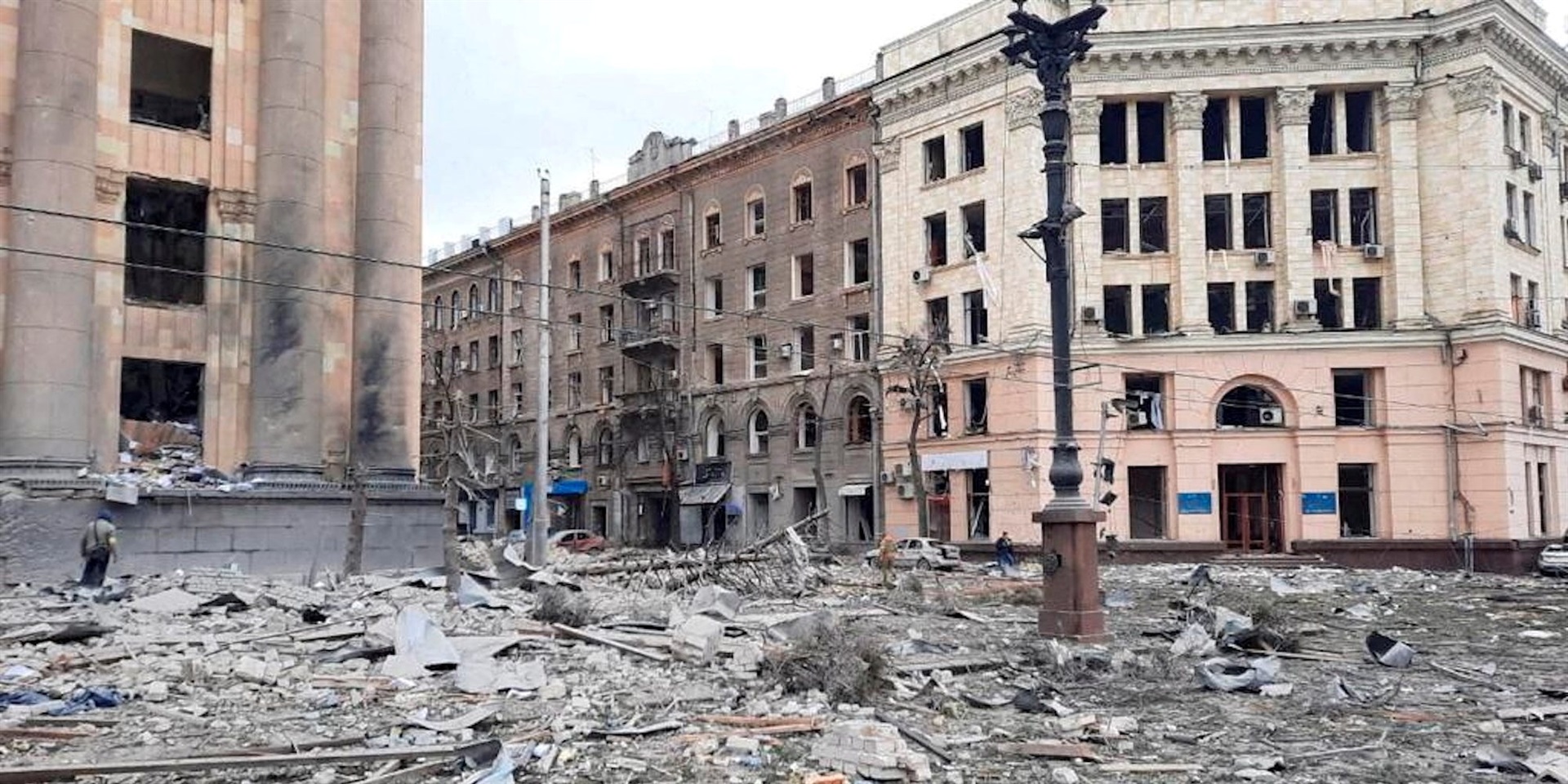 A view shows the area near the regional administration building in Kharkiv, which city officials said was hit by a missile attack, on March 1, 2022.
REUTERS/Vyacheslav Madiyevskyy/File Photo

The European Disability Forum has said that the situation in Ukraine is "appalling" for the 2.7 million people with disabilities.

The International Disability Alliance called for emergency response, saying that disabled people "already cut off from their communities, risk being abandoned and forgotten."

They added that "evacuation plans are often not designed in accessible ways. Persons with disabilities cannot reach metro stations and bunkers. In many cases, shelters are inaccessible for persons who use wheelchairs to enter and navigate.

"The level of stigma and ignorance against persons with intellectual disabilities and persons with psychosocial disabilities increases during conflict, putting them at higher risk of being left behind in evacuations and experiencing violence and abuse."

In Bucha, a city outside Kyiv, a woman told Insider that her grandmother had been abandoned in a care home after patients who could walk were evacuated.

Xenija — who has been evacuated to Warsaw, Poland — told Insider that her 72-year-old grandmother, who has Parkinson's disease, was abandoned with roughly 35 other residents in the nursing home. They were "left to die," she said.

"I don't know what we can do not to let them die. No one would even bury them. That kind of death is most terrifying," she said.

She said a relative of a resident in the home organised an evacuation bus, but it is not clear how many people were rescued.

"I'm in shock that a private person was in charge of this [evacuation], not the owner of the home," Xenija told Insider.