Russia has reminded South Africa about its role in the fight against apartheid, support of uMkhonto we Sizwe, and BRICS partnership in celebrating 30 years of diplomatic relations between the two countries.

Russia's relationship with South Africa stretches back more than 200 years but it wasn't until 28 February 1992 that official diplomatic ties were established.

To mark the 30th anniversary of the establishment of diplomatic links between the two countries, Russia’s foreign ministry, on Monday, issued a statement – in Russian – chronicling the "time-tested friendly relations" with South Africa.

????????Today marks 3??0?? years since the establishment of diplomatic relations between Russia and South Africa!

Our interaction is distinguished by the strong bonds of friendship & cooperation established during the struggle against apartheid, which continue to develop today. pic.twitter.com/OHLS4AL5HS

The statement made no mention of the current crisis in Ukraine or of South Africa's unclear position on the Russian invasion. International Relations and Cooperation Minister Naledi Pandor recently called on Russia to immediately withdraw from Ukraine.

President Cyril Ramaphosa, supported by the ANC, has called for mediation – not a withdrawal – creating tension among the political leadership and uncertainty surrounding South Africa's official stance on the conflict.

The Russian foreign ministry's statement deals extensively with South Africa's liberation struggle, led by the ANC, its armed wing uMkhonto we Sizwe, and the Communist Party. A Soviet Consulate was first established in 1942 but was shut down six years later when the National Party came to power and began implementing its policy of racial segregation.

"For the next few decades, our country actively supported the South African people's national liberation struggle," said a translated version of Russia's statement.

"Let's underline that for a long time, the USSR remained the only major state that fundamentally refused contacts with the criminal [apartheid] regime." Oliver Tambo, in his role as deputy president of the ANC, travelled to Moscow in 1963 "with a request for the support of the armed wing of uMkhonto we Sizwe" noted the statement.

"The Soviet Union not only provided significant financial support to the South African liberation movement, but also assisted in training military personnel…" 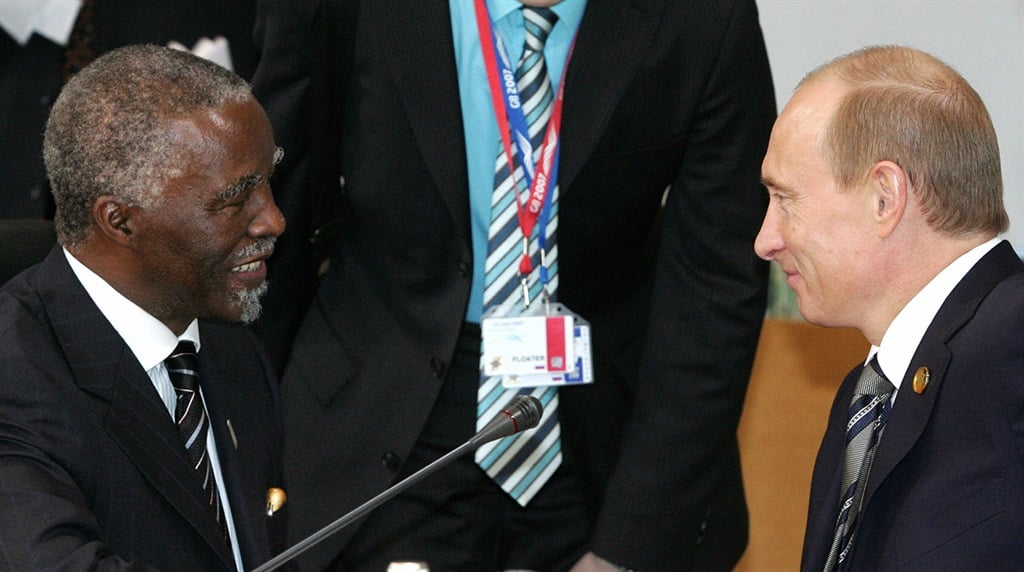 Later that year, then-president FW De Klerk undertook an official visit to Russia. In 1999, President Nelson Mandela initialled the Declaration on Principles of Friendly Relations and Partnership between Russia and South Africa in Moscow.

President Vladimir Putin ratified these agreements with President Thabo Mbeki during his visit to South Africa – the first of its kind for a Russian head of state – in 2006.

The statement also described the partnership between South Africa and Russia as part of BRICS.

See also | How South Africa is tied to Russia through R25.5 billion in BRICS cash

"Russia and South Africa are actively cooperating within the UN, BRICS, G20, and in other multilateral formats." Within the context of the global Covid-19 pandemic, the Russian foreign ministry added that it "was the first to come to the aid of the South African people" following the discovery of the Omicron variant in late November 2021.

This scientific mission, to study the clinical and epidemiological characteristics of Omicron, has also been cited, by a well-placed source in South Africa's government, as a reason to push for mediation between Russia and Ukraine as opposed to messaging around an outright withdrawal.