A Russian service member is seen atop of a T-72B3 main battle tank during military drills at the Kadamovsky range in the Rostov region, Russia, on December 20, 2021.
Sergey Pivovarov/Reuters

US intelligence indicates that Russia has operatives trained in sabotage who are in position and preparing for a possible false-flag operation in eastern Ukraine, which Russia could use to justify military action against Ukraine. CNN first reported the news on Friday, citing an anonymous US official.

"We have information that indicates Russia has already pre-positioned a group of operatives to conduct a false-flag operation in eastern Ukraine," an anonymous official told The Washington Post, adding that "the operatives are trained in urban warfare and in using explosives to carry out acts of sabotage against Russia's own proxy-forces."

Such acts would offer Moscow a potential justification to mobilise the 100,000 troops, as well as military equipment, it has stationed at various positions along the border with Ukraine, against its neighbour.

An anonymous official told Politico that these operatives could begin carrying out operations "several weeks" before any potential offensive, noting that "we saw this playbook in 2014 with Crimea."

The official's statements echo some of those made by White House National Security Advisor Jake Sullivan on Thursday.

"Russia is laying the groundwork to have the option of fabricating a pretext for an invasion, including through sabotage activities and information operations, by accusing Ukraine of preparing an imminent attack against Russian forces in Eastern Ukraine," Sullivan said at a press briefing. 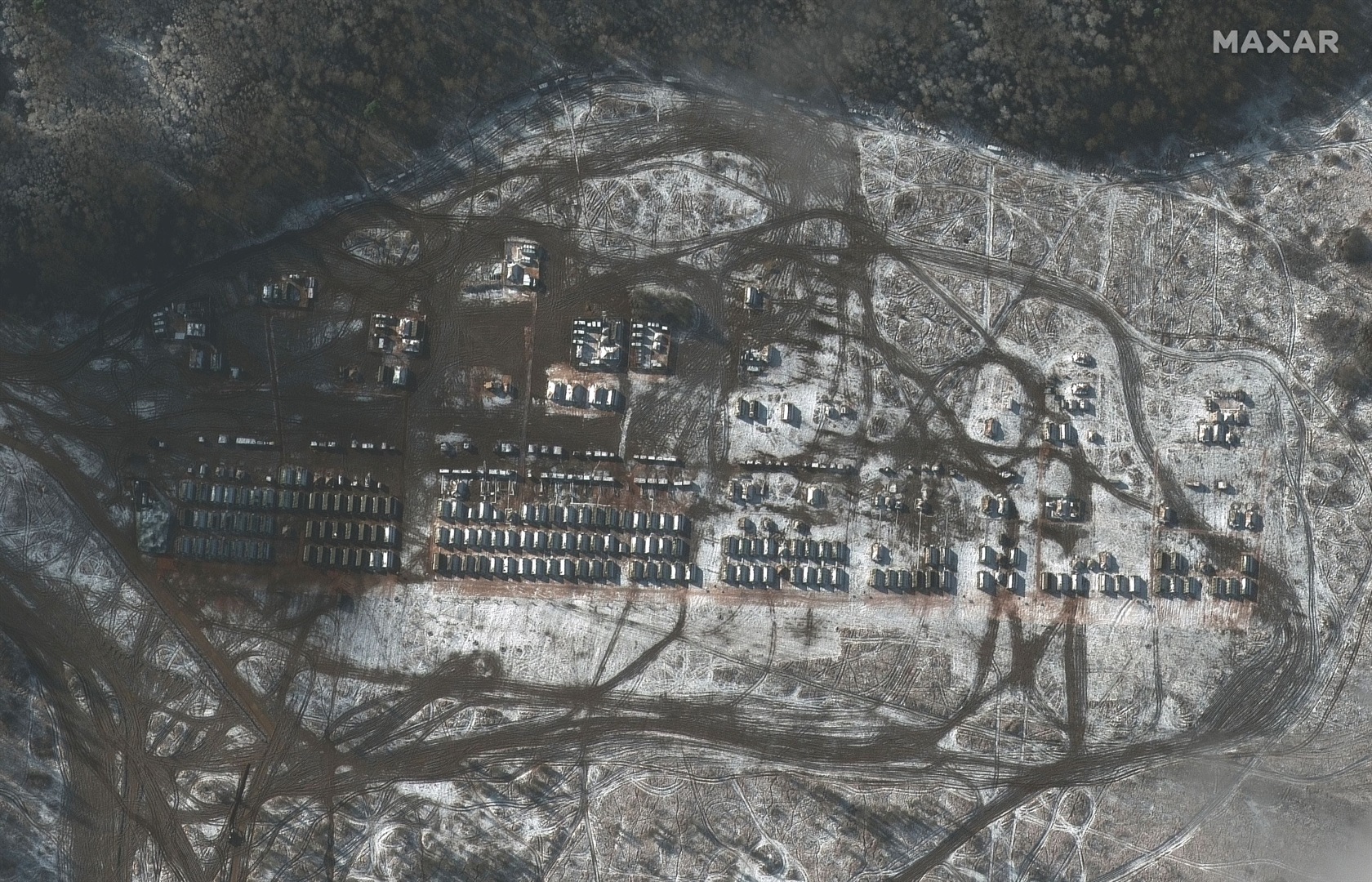 Russian Ground Forces, including hundreds of tanks, self-propelled artillery, and other military equipment, are deployed in a training area about 160 miles north of the Russia–Ukraine border, seen in a satellite image taken on Nov. 9, 2021.
Satellite image ©2021 Maxar Technologies.

"We saw this playbook in 2014," he said, referring to the Russian invasion and annexation of Crimea. "They are preparing this playbook again."

Ukraine's Ministry of Defence has also made similar suggestions, saying Friday that "the military units of the aggressor country and its satellites receive orders to prepare for such provocations," according to CNN.

Warnings that Russia may be looking for a pretext to invade Ukraine come as talks with the US and NATO have stalled and Russian officials say that the country has "run out of patience."

There were no major breakthroughs in a series of diplomatic discussions between Russia and Western powers in Europe this week. A Russian and US delegation met Monday, followed by a meeting between Russian envoys and NATO on Wednesday, and the discussions continued at a meeting of the Organisation for Security and Cooperation in Europe on Thursday.

By the end of the week, both sides sounded increasingly pessimistic as Russia continued to make demands for binding security guarantees that the US and NATO have repeatedly dismissed as non-starters.

Michael Carpenter, the US ambassador to the OSCE, said at a press briefing on Thursday that the "drumbeat of war is sounding loud, and the rhetoric has gotten rather shrill."

Moscow has insisted, among other demands, that Ukraine and Georgia be barred from ever joining NATO. But the alliance has remained firm that its open-door policy is non-negotiable. Russia's top diplomat on Friday insisted that the West respond to Moscow's demands in writing by next week.

The US has warned Russia that a military incursion into Ukraine would lead to massive economic consequences.

Along these lines, Senate Democrats on Wednesday introduced a sanctions bill that would punish top Russian officials— including Russian President Vladimir Putin — if Russia invades. The Kremlin responded by warning that sanctioning Putin would lead to a complete rupture in US-Russia ties.

The Kremlin has claimed Russia has no plans to invade Ukraine, but Western leaders have expressed extreme skepticism.

"It bears repeating that it was Russia that invaded Ukraine in 2014, it is Russia that continues to fuel a war in eastern Ukraine that has claimed nearly 14,000 Ukrainian lives, and now it's Russia's actions which are causing a renewed crisis not only for Ukraine, but for all of Europe and for us," Deputy Secretary of State Wendy Sherman, who led the US delegation in talks this week, said at a press briefing on Wednesday.

"It is Russia that has to make a stark choice: de-escalation and diplomacy or confrontation and consequences," Sherman added.