A Soyuz rocket launches to the International Space Station from Baikonur, Kazakhstan on October 23, 2012.
Bill Ingalls/NASA via Getty Images

Russia is planning to send a nuclear-powered spacecraft to the moon, then Venus, then Jupiter.

Roscosmos, Russia's federal space agency, announced Saturday that its "space tug" - the term for a spacecraft that transports astronauts or equipment from one orbit to another - is scheduled to launch on an interplanetary mission in 2030.

Several countries have their eyes on similar technology as a way to shorten trips in space. Right now, spacecraft rely on solar power or gravity to accelerate. But that means it could take more than three years for astronauts to conduct a round-trip visit to Mars. NASA estimates that a nuclear-powered spacecraft could shave a year off that timeline.

The US hopes to put a nuclear-power plant - a 10-kilowatt reactor integrated with a lunar lander - on the moon as early as 2027. So far, however, NASA has only sent one nuclear reactor to space, on a satellite in 1965. Other spacecraft, like the Mars Curiosity and Perseverance rovers, are also nuclear-powered, but they don't use a reactor.

Russia, meanwhile, has put more than 30 reactors in space. It's "Zeus" module would advance those efforts by using a 500-kilowatt nuclear reactor to propel itself from one planet to the next, according to Russian state news agency Sputnik.

The mission plan calls for the spacecraft to approach the moon first, then head toward Venus, where it can use the planet's gravity to shift directions toward its final destination, Jupiter. That would help conserve propellant.

The entire mission would last 50 months (a little over four years), according to Alexander Bloshenko, Roscosmos' executive director for long-term programs and science. During a presentation in Moscow on Saturday, Bloshenko said Roscosmos and the Russian Academy of Sciences are still working to calculate the flight's ballistics, or trajectory, as well as the amount of weight it can carry.

The mission may ultimately be a precursor to a new frontier of Russian spaceflight: Sputnik reported that Russia is designing a space station that uses the same nuclear-powered technology.

Nuclear energy has advantages over solar power in space 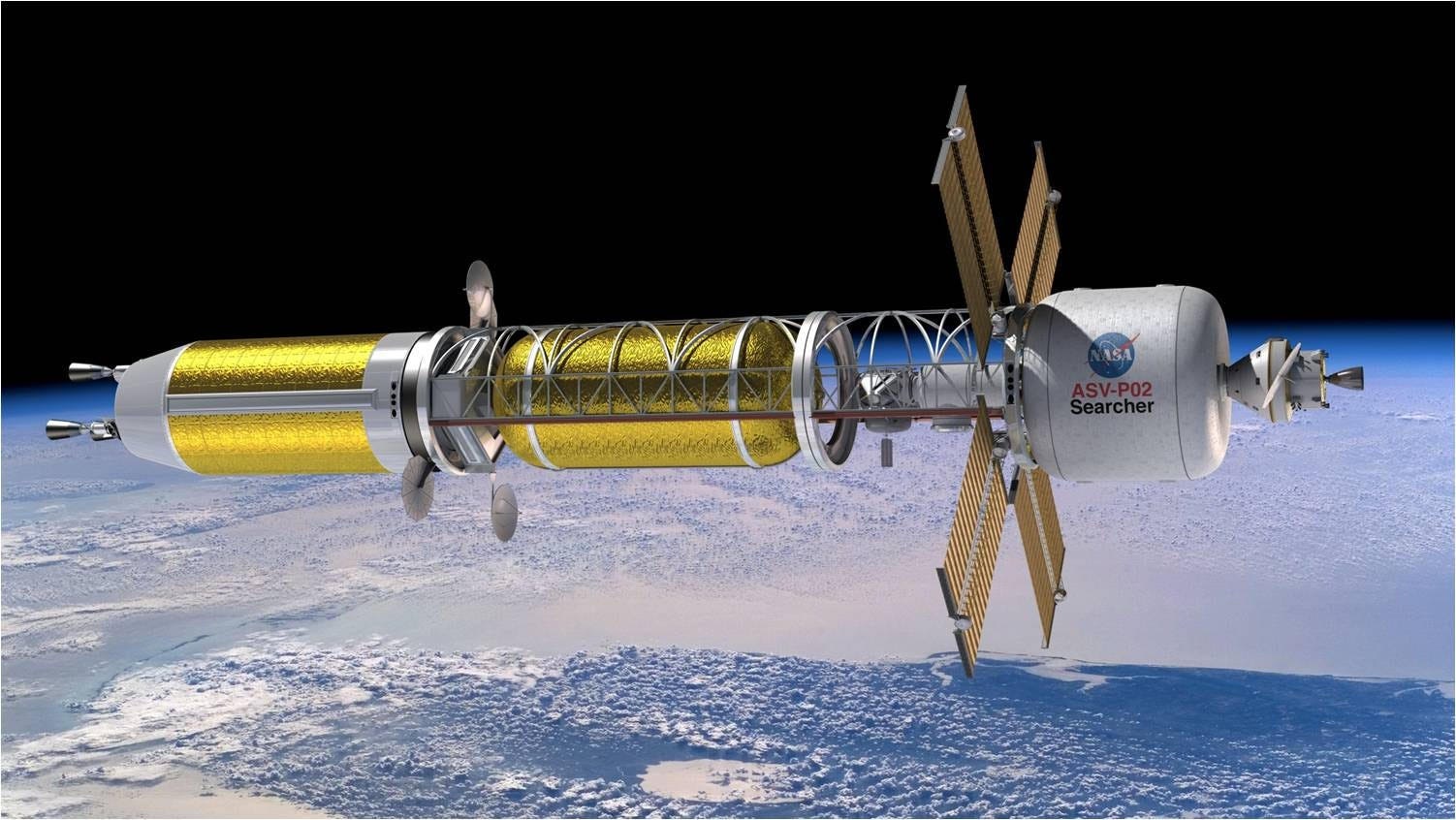 A concept of a NASA spacecraft that would use nuclear thermal propulsion.
NASA

Most spacecraft get their energy from a few sources: the sun, batteries, or unstable atoms called radioisotopes.

NASA's Juno spacecraft at Jupiter, for instance, uses solar panels to generate electricity. Solar power can also be used to charge batteries in a spacecraft, but the energy source becomes less potent as a spacecraft gets farther from the sun. In other cases, lithium batteries can help power shorter missions on their own. The Huygens probe, for instance, used batteries to briefly land on Saturn's moon, Titan, in 2005.

NASA's twin Voyager spacecraft use radioisotopes (sometimes called "nuclear batteries") to survive the harsh environments of the outer solar system and interstellar space, but that's not the same as bringing a nuclear reactor on board.

Nuclear reactors offer several advantages: They can survive cold, dark regions of the solar system without requiring sunlight. They're also reliable for long periods of time - the "Zeus" nuclear reactor is designed to last 10 to 12 years. Plus, they can propel spacecraft to other planets in less time.

Russia is gearing up for a nuclear-powered space station Russian engineers began developing the "Zeus" module in 2010 with the goal of sending it to orbit within two decades. They're on track to meet that mark.

Engineers started manufacturing and testing a prototype in 2018, Sputnik reported. Roscosmos also signed a contract last year worth 4.2 billion rubles (R800 million) that put Arsenal, a design company based in St. Petersburg, in charge of a preliminary design.

The technology could aid Russia's efforts to develop a new space station by 2025. The BBC reported last month that Russia plans to cut ties with the International Space Station - which it shares with the US, Japan, Europe, and Canada - that year.

Russia launched the ISS in partnership with the US in 1998. But Russian Deputy Prime Minister Yury Borisov told the state TV channel Russia 1 last month that the ISS's condition "leaves much to be desired." Indeed, the station has recently experienced air leaks and a breakdown of its oxygen-supply system.

NASA has cleared the ISS to fly until at least 2028, but the agency will likely de-orbit the station in the next 10 to 15 years.