The Russian Ministry of Defence released on Thursday videos of five new weapon systems, which Russian President Vladimir Putin bragged in a March address would render US missile defences "ineffective".

The new weapons included a new intercontinental ballistic missile, a global cruise missile, a nuclear torpedo, a hypersonic plane-launched and nuclear-capable missile, and a laser.

"They kept ignoring us," Putin said about the West in his state of the union address after describing the weapons. "Nobody wanted to listen to us, so listen to us now."

Here are the newly published Russian MoD videos, and what we know about the weapons: The Sarmat is a liquid-fuelled intercontinental ballistic missile that Putin claimed had an unlimited range and could beat any air defences.

Meant to replace the SS-18 Satan, the Sarmat is silo-based and has several payload options, including 10 large warheads or 16 small warheads or a combination of warheads and countermeasures.

It appears to have been successfully tested in late March, and is expected to be fielded by 2020-2021.

Read more about the Sarmat here.

Watch the Russian MoD video of the Sarmat below: The Poseidon is an underwater, high-speed nuclear-capable torpedo unlike any other nuclear weapon.

As opposed to other nuclear weapons in which lingering radioactivity is only a dangerous side effect, the Poseidon uses radioactive waste to deter, scare, and potentially punish enemies for decades to come.

It's supposedly surrounded by cobalt, which, when detonated, would spread a shroud of radioactive cobalt indiscriminately across the planet.

One US analyst estimated that the cobalt would take 53 years to return to non-dangerous levels.

RIA Novosti reported on Thursday that tests of the Poseidon were "being completed".

Watch the Russian MoD video of the Poseidon below: In his March speech, Putin called the Burevestnik a "global cruise missile", and claimed it had unlimited range and was nuclear-propelled.

But the missile was tested unsuccessfully four times between November 2017 and February 2018, according to CNBC. It was again tested in May, and only flew 35 kilometres.

Watch the Russian MoD video of the Burevestnik below: 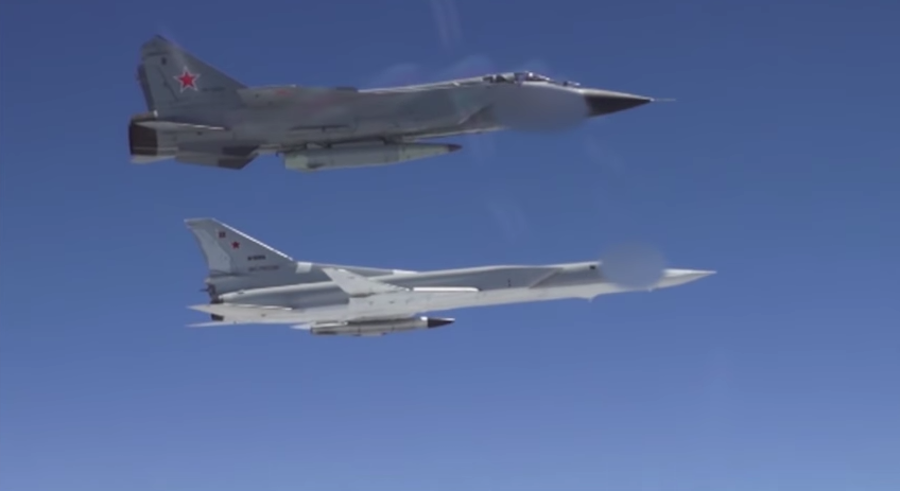 The Kinzhal, which is Russian for "dagger," is a plane-launched, nuclear-capable, hypersonic cruise missile that was successfully tested from a MiG-31BM in March.

According to the Russians, it has a top speed of Mach 10, a range of almost 1,200 miles, or about 2,000km and is even manoeuvreable at hypersonic speeds. With the 1,860-mile (just shy of 3,000km) unfuelled range of the MiG-31BM, the Kinzhal would have intercontinental strike capability.

However, several reports have been sceptical of the Kinzhal's capabilities. The War Zone's Tyler Rogaway even likened it to Russia's Iskander ballistic missile.

The new video released by the Russian MoD also shows a Tu-22 carrying the Kinzhal, which would give it an even greater range.

Watch the Russian MoD video of the Kinzhal below: The Peresvet laser's capabilities remain shrouded in mystery, but Russian state-owned media TASS has reported that they've "been placed at sites of permanent deployment ... Active efforts to make them fully operational are underway".

The Defence Blog has speculated that they could be jamming lasers, while two Russian military analysts have suggested that the lasers will be used for air and missile defence.

Watch the Russian MoD video of the Peresvet below: