Running a business from a war zone: How a Ukrainian digital startup is surviving Russia's invasion 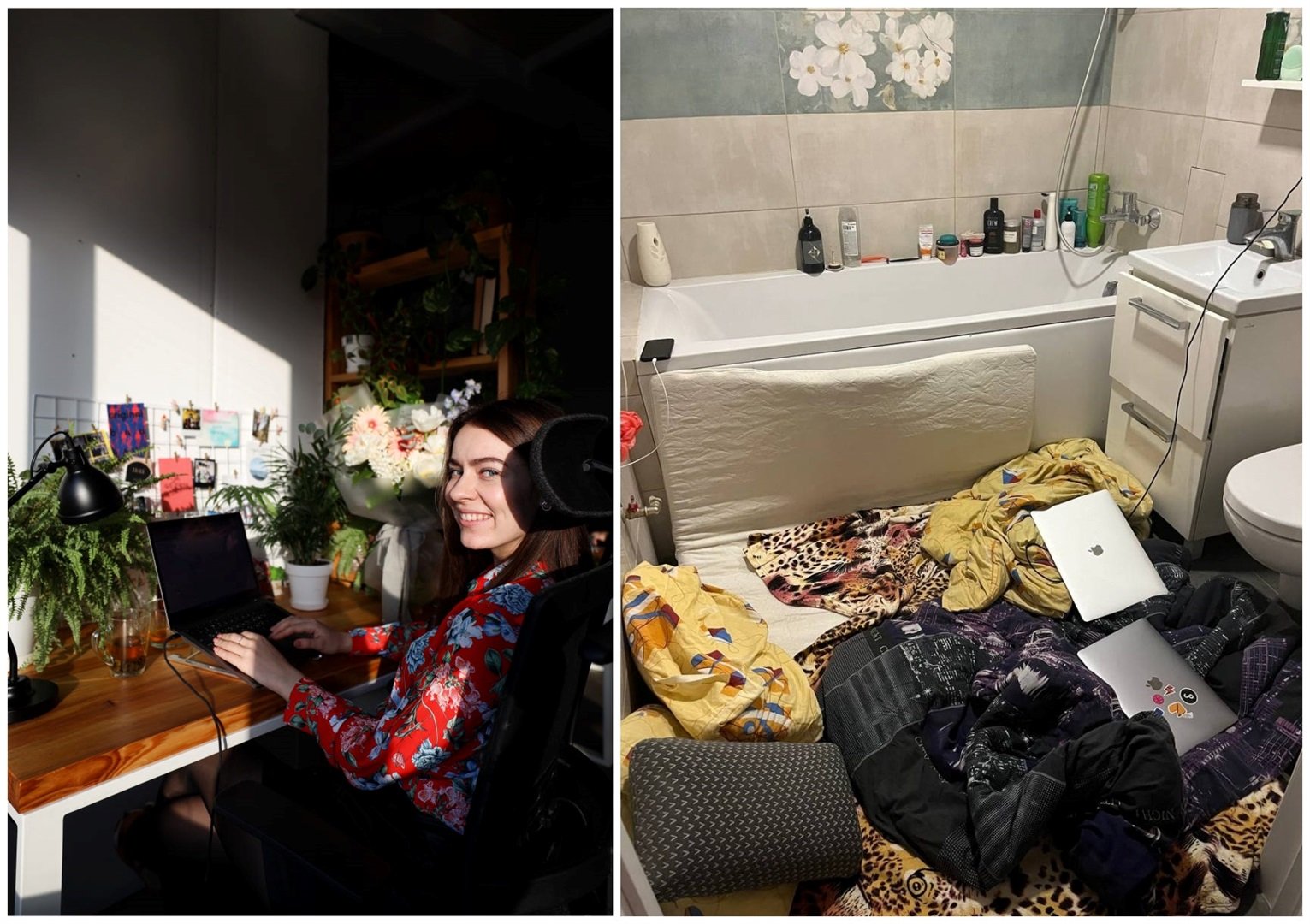 Outcrowd project manager worked from the company's Kharkiv office (L), but later sheltered to work from her bathroom in the early days of Russia's invasion (R).
Insider/OutCrowd

Alex Khudekovskyi was sleeping, when, in the middle of the night on 24 February, he woke up to a call from a friend: "Hey Alex, the war just started."

Soon his work chat was teeming with messages from colleagues, some, who from their high-rise buildings in the eastern city of Kharkiv, could see flames on the horizon.

It was the first day of Russia's invasion of Ukraine and overnight, life as Khudekovskyi knew it had changed, he told Insider.

Ukrainians have since fled their homes or taken cover in bomb shelters, while businesses have fettered shut. Many international firms have also had to cease their operations there.

But Khudekovskyi is part of Outcrowd, a design agency that hardly took a break despite the outbreak of war. The company was based out of Kharkiv, one of the cities most heavily bombed by Russian forces. Now the team is scattered mainly in the West of the country, with some colleagues also having fled abroad.

While it may be unusual to imagine "business as usual" when war breaks out, Outcrowd workers see it as part of a larger, new national ethos.

"The entire nation just united so much. Everyone tries to do their best to help the country," Natalia Alimaskina, Outcrowd's co-founder and financial director told Insider, explaining that their team was motivated to get back to work as quickly as possible, in defiance of Russia's efforts to sow division among Ukrainians. "So that gives us a lot of energy."

Even while fleeing, Alimaskina said, some colleagues worked from their cars.

Outcrowd's US partner, DesignRush, which connects agencies with businesses, works with a number of Ukrainian companies that were all eager to get up and running as quickly as possible.

"They wanted to be set up to continue working as fast as possible," Design Rush's general manager, Gianluca Ferruggia, told Insider.

Ferruggia said the company offered agencies like Outcrowd discounted or free support in recent weeks to get up and running again. In particular, it raised the visibility of Ukrainian agencies among international clients who might be worried about working with them, due to the volatility of the conflict.

Outcrowd, therefore, assembled quickly shortly after the invasion began, using their professional and personal networks to ensure colleagues left Kharkiv with somewhere safe to go. Many headed to Western Ukraine, which was spared in the early days of the invasion and therefore served as a safe haven for those fleeing the east.

Khudekovskyi went to his hometown of Chernivtsi, while Alimaskina and several other colleagues are now based in Lviv. The team rescued their laptops and other machines before leaving Kharkiv. Only Alimaskina's brother is left in the city, and he periodically checks to see if the office is still standing. More than a month into the invasion, it still is.

Despite having a brick and mortar office, the team worked mostly remotely throughout the pandemic. This is an experience that is now helping the team work remotely during the conflict.

"In the past few years, we've managed to build the team in a way that everyone could work remotely," said Alimaskina. The company also has largely international clients that it had always communicated virtually with.

"We don't really feel that much impact on our work even though we do feel a lot of impact on our life," Alimaskina said, reflecting on the impact of the invasion.

Khudekovskyi and Alimaskina urged other Ukrainian entrepreneurs, especially those able to use remote technologies, to try their best to continue working. "We need to think about the future and about rebuilding the economy, rebuilding the country," she said.

He also encouraged international clients to not discount Ukrainian startups, adding that they have managed to be resilient and reliable despite working from a conflict zone.

Alimaskina's last word to entrepreneurs in other conflict zones? "Try not to spend too much time scrolling the news, because that kills you."