This runner creates intricate works of art with his routes, and the photos will amaze you Lenny Maughan is a marathon runner in San Francisco whose cleverly shaped routes have looked like everything from fruits and flowers to famous figures and characters.

Maughan said he started designing unique running routes in March 2015, when he created a route in memory of Leonard Nimoy, the actor who played Spock in the Star Trek franchise.

"That first design proved to me that I could create a shaped route if I planned in advance, and after that, I designed all sorts of routes," Maughan told INSIDER. "Then, I shared them on smartphone apps that recorded and published my route. I've been doing this ever since."

Maughan's runs can span anywhere from 15 miles (24km) to more than 40 miles (60km), he told INSIDER. According to his account on Strava, an application he uses to record and publish his routes, Maughan has run 500 miles (804km) (and counting) as of July 2019.

He said completing his artistic routes isn't about the distance or speed. Rather, he enjoys the challenge of each design.

"It's a fun personal project, and it's a way for me to get my running in and also practice art," he said. "Plus, people love seeing [each route], and they are inspired by it, and that makes me happy."

Keep reading to see some of Maughan's most lifelike running route designs.

Maughan said his process of creating and running these clever routes begins with thinking of an idea for the shape. His barefoot-shaped route made for a 27.1-mile (43km) run, according to Maughan's Strava page.

Maughan said the challenge is thinking of a shape that is one continuous line ... "I enjoy the challenge of making the route work with keeping it one continuous line and also fitting into the streets," Maughan said.

... and creating a design that fits into the streets of San Francisco, where he lives and runs regularly. 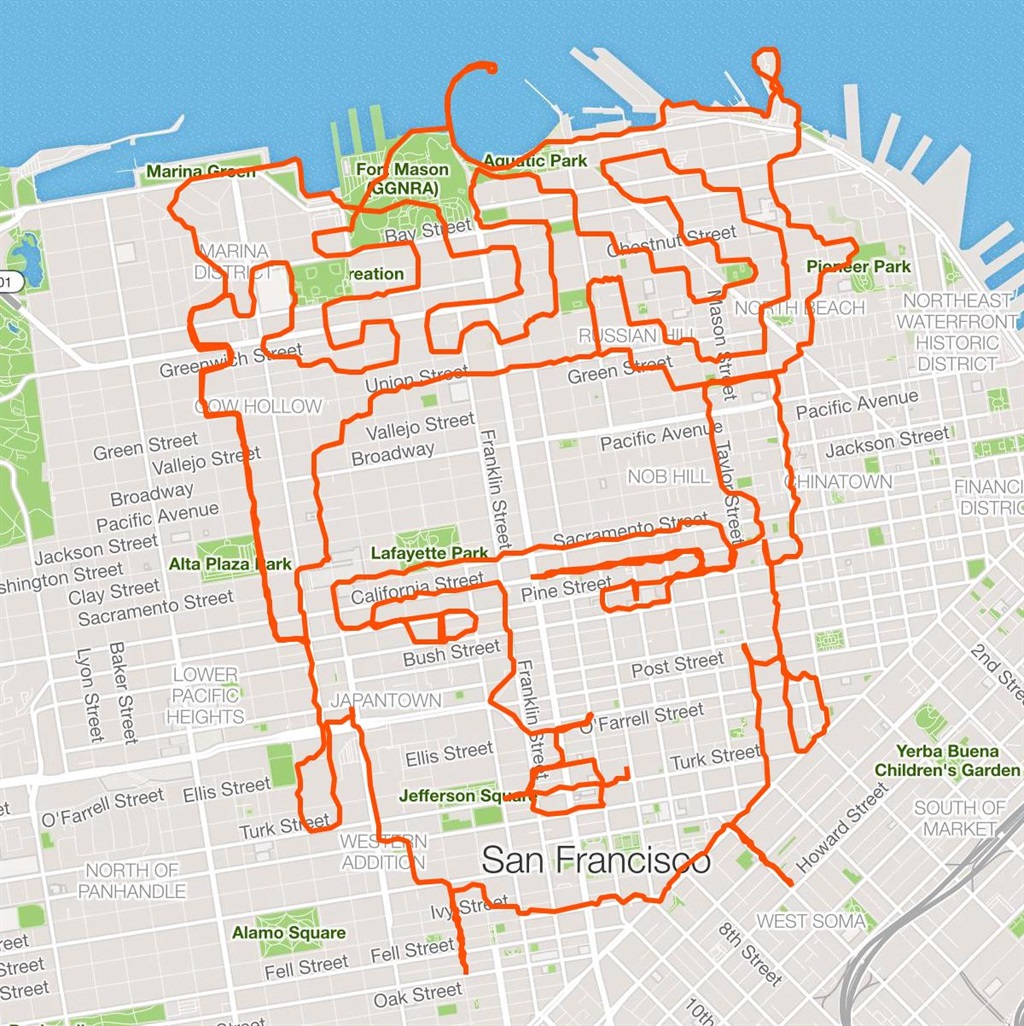 Maughan ran this Frida Kahlo-inspired route, which was almost 30 miles (48km). It took him about six hours to complete.

Once he's decided on a design, Maughan said he prints out a map of San Francisco and draws the shape with a highlighter. Maughan told INSIDER he'll draw the shape as many times as needed until his route matches his idea.

Then comes the actual running. Maughan's routes tend to be 32km on average, but he said he's not concerned with the distance or speed. Instead, he creates and completes his unique routes as a way to challenge himself, have fun with exercise and art, and share his creations with others in the running community. This impressive route looks just like a hand holding a pair of chopsticks.

His detailed routes make for lifelike shapes of everyday objects, such as this coffee mug.

This route was 59km, and it took Maughan almost nine hours to complete.

This stiletto-shaped route is just as impressive. Maughan completed this 14km run in a little more than an hour and a half.

Maughan's animal-shaped routes are equally detailed, like this design of a smiling pig, which even has a curly tail. Maughan said that when he runs, he enjoys imagining where he is on the shape he designed.

"I sometimes think to myself during the run, 'I wonder what part of the design I'm on. Am I on the pig's tail? Am I on its smile?'" Maughan said.

His shark route is complete with a set of pointy teeth. Maughan said he likes how the applications he uses to publish his routes sometimes make the shape look imperfect.

"I like that the route I publish and share with others isn't always perfect, or the lines may seem wider or crooked," he said. "The chaos brings a new element into my designs, which makes them more unique."

This route depicts a seagull with perfectly rounded wings and a realistic beak. This seagull-shaped run took Maughan about four hours to complete.

Appropriately, Maughan's longest route to date was in the shape of a person running. This path was 69km, and it took Maughan 11 hours to run. It has also been his longest run so far, he said.

When Maughan draws his routes, he said he doesn't take into account the hilly San Francisco streets, which can make for an extra challenge. "The elevation can be more difficult than the miles. When I lay out a shape, I don't even consider the elevation and hills. It's inescapable," Maughan said.

Since starting his project in March 2015, Maughan has completed his goal of creating and running an original route every month. "I've been running since the high school track team, and I love recording all of my runs," Maughan said. "This little project I've started is really just for me, but I'm glad it makes people smile." "People love seeing [each route], and they are inspired by it, and that makes me happy," Maughan said.

Related Links
An artist is leaving mind-bending optical illusions on buildings worldwide, and they'll make you...
A makeup artist says she was 'extremely hurt' after a bride refused to hire her because she's a...
People are losing it over a 'sinister' Timothée Chalamet doll that you can buy for R1.8 million
Next on Business Insider
Govt plans to celebrate hitting a 50% vaccine rate – 16 months after setting a 67% target