15 of the biggest fashion faux pas made by royals Princess Diana turned a choker given to her by the Queen into a headband, resulting in reported tension with the monarch. During a 1985 gala dinner in Australia with her then-husband Prince Charles, Princess Diana put a new twist on a piece of heirloom jewelry given to her as a wedding gift by the Queen, according to Woman & Home.

The emerald choker reportedly once belonged to Queen Mary and was a part of the Crown Jewel collection before it came into Diana's possession.

However, the publication reported that royal commentator Debora Attanasio told Marie Claire Italia the Queen was "very irritated" to learn Diana styled it as a headband.

The Queen isn't a stranger to her own fashion faux pas and was pictured in a food-stained dress at Crown Prince Pavlos of Greece's 2010 birthday party. The Queen was pictured in a stained dress and holding a broken bag in 2010.
Max Mumby/Indigo/Getty Images

In 2010, the Queen attended the 70th birthday party of her cousin, Crown Prince Pavlos of Greece at his residence in London, and was pictured wearing a dress stained with food, according to an article published by The Mirror at the time.

The publication reported that the monarch is "usually very particular about her appearance and immaculately turned out," which made the apparent fashion faux pas that much more glaring. In a separate report, the Daily Mail wrote it was understood the stain resulted from a "coffee spillage" done by a server.

Along with the stained dress, the Queen's glittery bag apparently suffered its own casualty with a broken strap. Diana's 1981 voluminous wedding dress is now seen as an iconic fashion moment. But at the time, not everyone was in awe of how it looked after she stepped out of a carriage and made her way up the stairs to St. Paul's Cathedral.

Appearing on ITV's "Invitation to a Royal Wedding," one of her wedding dress designers, Elizabeth Emanuel, said when she saw how creased the gown had gotten she was "horrified" to the point where she "actually felt faint," according to the Daily Mirror.

Despite the fashion faux pas, Diana was very happy with how it ended up looking, according to a 2020 Hello! Magazine interview with David Emanuel, who co-designed the dress with Elizabeth.

Kate Middleton was accused of ignoring an all-black dress code for women signaling support of the #MeToo movement at the 2018 BAFTAs. 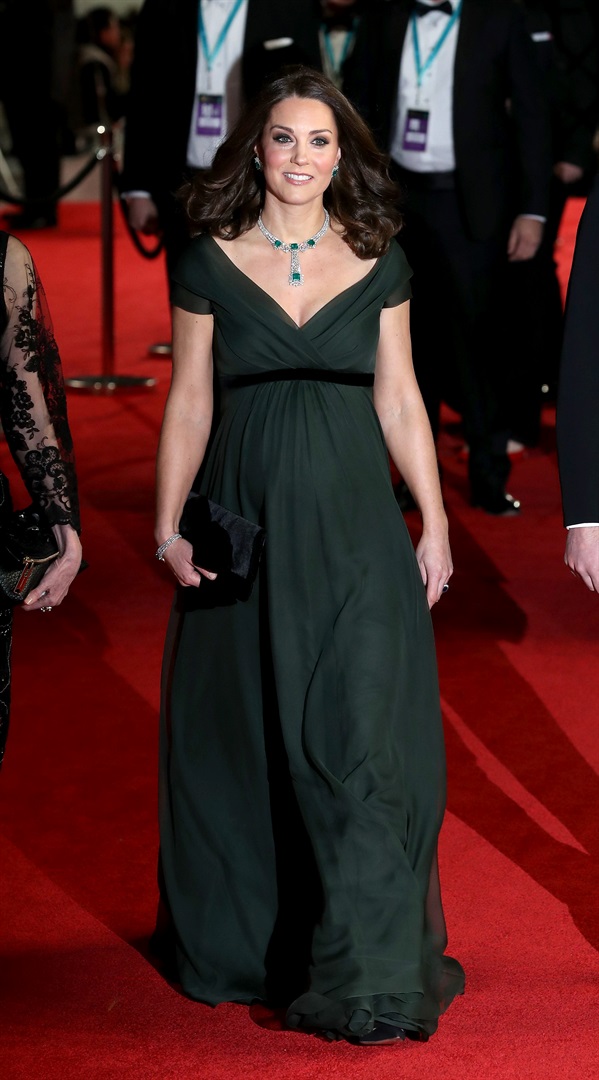 Kate Middleton found herself in a fashion predicament in 2018 while attending the BAFTAs. At the time, women in the entertainment industry and those attending red-carpet events were wearing black to show solidarity with the Time's Up movement.

As a royal, Middleton was expected to be politically neutral, which prompted speculation about whether she'd risk being the only female attendee at the award ceremony wearing colour.

She ended up wearing a dark-green dress with a black belt. Cosmopolitan published an article at the time saying that she "ignored the black dress code followed by all other female celebrities at the BAFTAs."

Meghan Markle arrived in Tonga in a red dress that she forgot to remove the price tag from. Meghan Markle forgot to remove a tag from her dress during a visit to Tonga in 2018.
Samir Hussein/WireImage, Karwai Tang/WireImage

In 2018, Meghan Markle looked elegant when she stepped off of a plane in Tonga wearing a cherry-red dress that gave a subtle nod to the country's flag. She accidentally left the price tag on, which photographers captured as she and Prince Harry made their way down onto the tarmac.

According to Page Six, the Self Portrait dress cost $430 and the Duchess of Sussex was unaware of the minor gaffe and she later changed into a dark-green gown.

Princess Anne wore a pantsuit in 1973, which was considered a risky style choice for a royal woman at the time. Princess Anne seemingly shocked high society in the UK after she decided to wear a blue-linen pantsuit to the theatre in 1973, Marie Claire reported.

At the time, Anne would've been around 23 years old, but the publication added that it was highly unusual to see a high-profile female royal wearing what was considered a daring look.

The princess also broke the Queen's reported cardinal rule on natural makeup by matching the blue of her suit with an electric-blue eyeshadow.

Middleton made another fashion faux pas when wore a purple Gucci blouse backward. Middleton was pictured wearing a purple Gucci blouse with a pussy-bow feature backward during a 2019 outing to the Henry Fawcett Children's Centre in London.

According to Harper's Bazaar, Net-a-Porter's online description of the top said it "features fabric-covered buttons that run down the back." By contrast, Middleton styled the top with the buttons at the front and tied the pussy-bow the opposite way.

However, she was also seen rewearing the top the same way during a Q&A video shared by the Duke and Duchess of Cambridge's Instagram account a year later, indicating that perhaps Middleton intentionally innovated the style of the blouse.

Prince Harry was spotted at a friend's wedding in 2018 wearing shoes with holes in the sole. Prince Harry wore shoes with holes in the sole to a wedding in 2018.
Samir Hussein/WireImage, Mark Cuthbert/UK Press via Getty Images

Three months after tying the knot with Markle, Prince Harry attended the wedding of his childhood best friend Charlie van Straubenzee in Surrey, England, where he was pictured strolling around the grounds in a pair of brogues with a gaping hole in the left sole, Time reported.

The publication added that although the Daily Mail dubbed the moment "Harry's shoe shocker," the minor wardrobe malfunction was likely unnoticeable while he gave his best man's speech. Eagle-eyed fans spotted what looked like a hole in Prince William's shoes in 2019.
FABRICE COFFRINI/AFP via Getty Images

Just like his younger brother, Prince William was spotted committing a shoe-related fashion faux pas during his 2019 interview with Sir David Attenborough at the World Economic Forum in Davos, Switzerland.

According to Woman & Home, eagle-eyed fans watching the conversation live noticed the prince was wearing heavily-worn shoes that may have had a hole in the sole like Harry's.

There was some speculation on Twitter, the publication added, that it could've been a piece of black tape or just signs of wear and tear on the shoe.

Middleton was criticized by an animal-rights group after she was pictured wearing a pair of fur-lined gloves on a ski trip. According to E! News the Duchess of Cambridge's Restelli Guanti designer gloves were lined with possum fur, prompting PETA UK's director at the time, Mimi Bekhechi, to release a statement criticizing the choice.

"If the gloves are indeed made of real fur, we'll be contacting Kate, who we imagine is unaware that possums killed for their fur are often caught in bone-crushing steel-jaw traps," Bekhechi said, according to E! News. Princesses Eugenie and Beatrice got some bad reviews for their outfits at Prince William's wedding.
Pascal Le Segretain/Getty Images

Princess Eugenie and Princess Beatrice made headlines around the world for their outfits of choice at Prince William and Kate Middleton's 2011 wedding.

Per the Express in 2018, Eugenie told Vogue that all the backlash surrounding the hats caused both her and Eugenie to break down in tears during a garden party at Buckingham Palace.

Princess of Michael of Kent was criticized for wearing a racist brooch to a Christmas banquet at Buckingham Palace in 2017. Princess of Michael of Kent was criticized for wearing the brooch in 2017.
Mark Cuthbert/UK Press via Getty Images

Princess Michael of Kent, who is married to the Queen's first cousin, sparked backlash after she was photographed arriving at the Queen's 2017 Christmas lunch wearing a Blackmoor brooch, considered controversial because it features exoticized portrayals of African servants and slaves, Insider previously reported.

Her choice of accessory drew even further criticism from royal fans who noted that Meghan Markle, who is biracial and was engaged to Prince Harry at the time, was also at the Christmas lunch.

According to the Daily Mail, she apologized for the faux pas in a statement, which read: "The brooch was a gift and has been worn many times before. Princess Michael is very sorry and distressed that it has caused offense."

Princess Diana raised eyebrows in 1980 after a picture of her wearing a translucent skirt went public. Known then as Lady Diana Spencer, the future Princess of Wales was photographed working at a nursery in 1981 wearing a skirt, dress shirt, and vest while caring for children.

However, the sun came out midway through the photo shoot, which made the skirt appear translucent in pictures, royal photographer Arthur Edward told Today in November 2020.

Diana, who was only 19 at the time, was horrified, the publication added.

The Queen proved she was only human after a strong gust of wind caused her white safari-style hat to blow off her head. 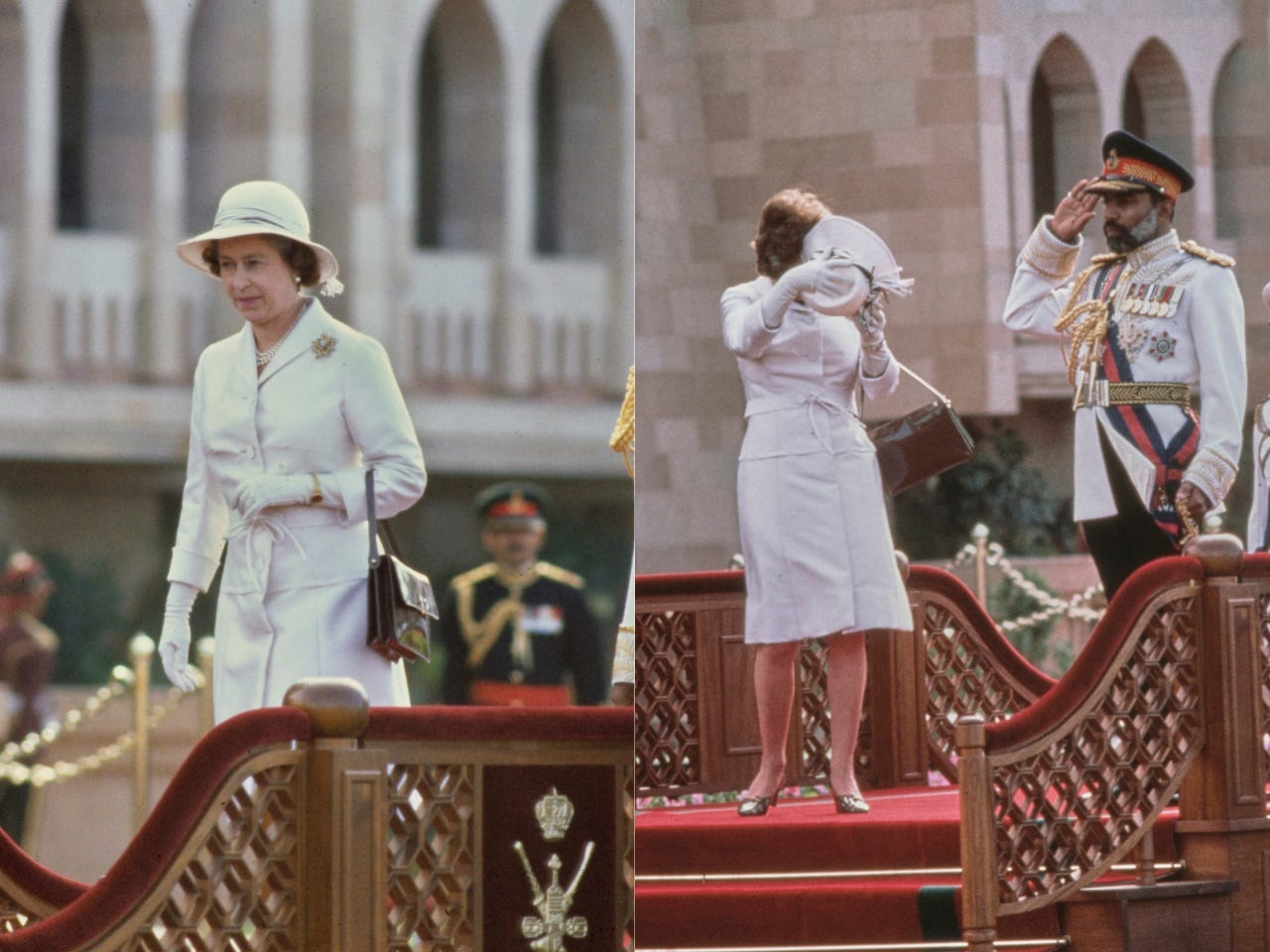 A gust of wind during a tour in Oman left the Queen grappling with her safari-style hat.
Serge Lemoine/Hulton Archive/Getty Images, Tim Graham Photo Library via Getty Images

In 1979, the Queen was probably regretting not using a hatpin after a strong gust of wind caused her havoc at a welcoming ceremony with Sultan Qaboos of Oman in Muscat, Hello! Magazine reported.

Pictures from the event show her struggling to regain control of the runaway hat as the wind blew. But eventually, she came back to her publicly-composed image.

Royal fans took issue with Camilla, the Duchess of Cornwall, wearing a similar outfit to the Queen in 2019. Camilla was said to have committed a fashion faux pas by wearing a similar shade of purple as the Queen in 2019.
Karwai Tang/WireImage, Mark Cuthbert/UK Press via Getty Images

The Duchess of Cornwall's outfit choice for the Commonwealth Day service in 2019 was labeled a fashion faux pas as the Queen also attended the Westminster Abbey ceremony wearing a similar shade of deep purple with a matching fascinator hat, according to the Express.

The publication reported Camilla arrived a few minutes prior to the monarch and accessorized her look with a pearl necklace, while the Queen donned a brooch. Both royals opted to pair their purple dress-coats with black gloves, handbags, and shoes.

Related Links
Belgium's royal family will reportedly host Ukrainian families in some of its properties
A video shows Prince Charles awkwardly dodge reporter's question about Prince Andrew
Why Prince Andrew hasn't lost his 'prince' and 'duke' titles yet, according to a royal expert
Next on Business Insider
New Zealand classifies Proud Boys and The Base as terrorist organisations