These round homes have survived every major hurricane in the last 50 years, including Hurricane Dorian in the Bahamas. Take a look. Hurricane Dorian swept through the Bahamas earlier this week, leaving behind a trail of devastation, including waist-deep floods and flattened homes. The storm has killed at least 20 people.

The Red Cross reports that Dorian damaged or destroyed around 13,000 houses in the Bahamas after making landfall there on Sunday as a Category 5 hurricane with wind speeds of up to 185 miles (287 kilometres) per hour.

For the past 50 years, the design company Deltec Homes has developed circular houses that are especially resistant hurricanes like Dorian. So far, all of the company's structures in the Bahamas seem to have survived the storm, the company said.

Take a look at how Deltec's properties are able to withstand hurricane-force winds.

The round design of a Deltec home makes it more aerodynamic than a traditional, rectangular structure. Because the buildings are circular, wind tends to flow around them instead of putting pressure on one side of a home. A sloping roof also deflects wind pressure, as opposed to a flat roof, which can come loose during a hurricane.

Deltec sources its lumber from a mill in Georgia, which tests each board to make sure it's sturdy enough to hold up during a storm. A Deltec home being constructed in Slidell, Louisiana after Hurricane Katrina

The company also uses impact windows, which are laminated and usually contain a synthetic inner sheet so that the glass doesn't shatter if it gets struck by an object. During a hurricane, a broken window can cause air pressure to rise and a house to blow apart from the inside.

On top of that, Deltec offers metal hurricane straps that tether a home's roof to its foundation.

Deltec has been designing these circular homes for more than 50 years. The properties can be found in about 30 countries. Deltec said it reached out to homeowners in the Bahamas to find out whether their houses remained intact. Those who responded said their properties survived. Dorian made landfall at the Abaco Islands in the Bahamas on Sunday. Many homes in the area quickly collapsed and were submerged in water.

Deltec's president, Steve Linton, told Business Insider that it has been tough to communicate with homeowners in the Bahamas, but a couple of residents with Deltec properties reported that they are "doing great," he said.

One Deltec home in the Abaco Islands, he said, lost some of its roof shingles and a bit of siding, but appears to be structurally intact.

In 2017, Deltec's structures in Texas weathered Hurricane Harvey as well. Harvey made landfall on San Jose Island, Texas, as a Category 4 storm in late August 2017. Three hours later, it made a second landfall at Rockport, Texas - part of the Texas mainland.

Linton said he visited Rockport after the storm and found widespread devastation. The storm damaged or destroyed nearly 135,000 homes in the state.

"It was pretty gut-wrenching because essentially you just see a pile of homes on the curb, like they're trash," he said. "Out of a hundred homes, there were maybe one or two that were left standing."

Deltec's homes were among them. "We had about 200 homes in the path of Irma," Linton said. "None of them were lost to the hurricane."

At one property, the section of a wall blew out, but the roof was still intact, Linton said. The lesson there, he said, was that homeowners should always board up their windows and doors.

"That's one of the common failure mechanisms for structures," he said. "If the hurricane gets inside the home, you essentially have a hurricane pushing from the inside and pulling from the outside." In October 2018, Hurricane Michael made landfall as a Category 5 storm near Mexico Beach, Florida. In the wake of the hurricane, photos showed large swaths of beachfront homes that had been flattened or cleared away by the storm.

But most of Deltec's properties were relatively fine, and those in the direct line of the storm sustained only minor damage.

This coastal home in Mexico Beach, Florida, for example, took a direct hit from Hurricane Michael. It lost part of its roof, but the structure was sound. "In one sense it's rewarding to see the Deltecs standing strong," Linton said. "Then on the other hand you're like, 'Wow, there's so much more work to be done.'"

The company's bungalows on Black's Island, a private resort in Florida, looked pristine after Hurricane Michael. 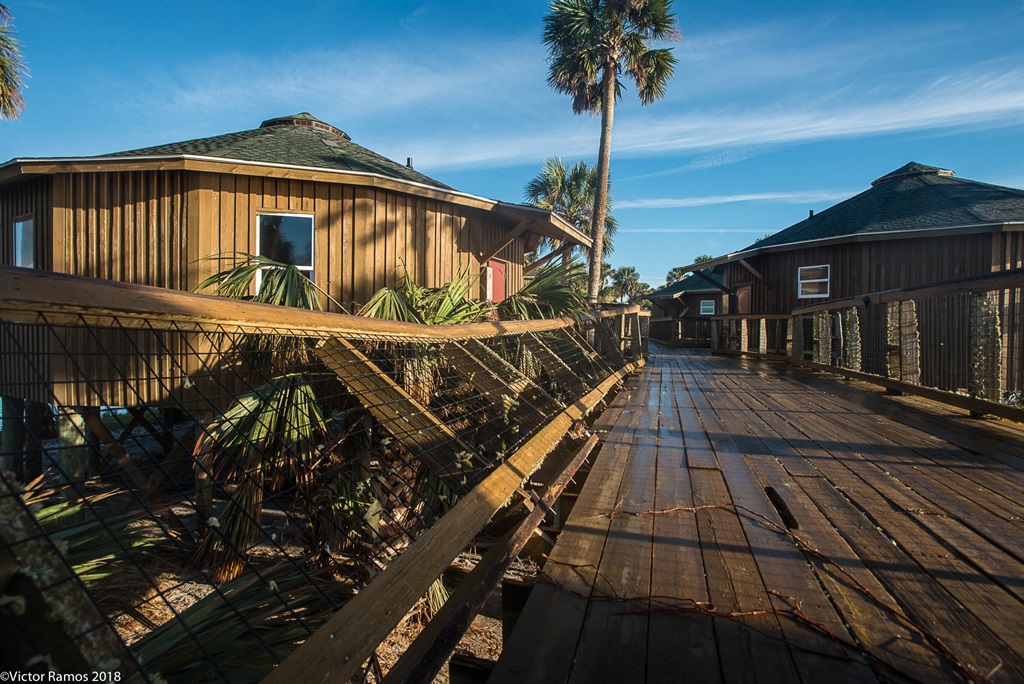 Linton said interest in Deltec homes "tends to ebb and flow with the rise and fall of these storms." He added that customers often ask for the homes to contain more windows, so the company is researching ways to add more without compromising the integrity of a structure or making it more vulnerable to hurricanes.

Deltec homes typically cost around 10% more than an average house of the same size. The smallest model starts at around $100,000. But the company says the hurricane-resistant features could pay off over time.

Linton told Business Insider in 2016 that the total cost of a Deltec home - including repairs, utilities, and upkeep - could be 20% less than a typical property after 20 years. The homes, he said, are designed to last for generations, so should require little maintenance.

Deltec homes can also be customized to have varying levels of energy efficiency, all the way up to net-zero energy consumption.

Deltec's designs offer another benefit: The round shape provides a panoramic view. Linton said that customers tend to purchase a Deltec home because they're sturdy and energy-efficient, but what stands out is the view.

Deltec is testing new products, like an insulation blanket that keeps homes warm during the winter. Right now, Deltec is working on a way to insulate properties in cold climates. This would improve energy efficiency, since it would reduce the need to generate heat.

Many traditional homes have insulation between the wooden studs, but that allows some heat to seep out. Linton said Deltc wants to be able to wrap the entire exterior of a home in insulation, like a blanket.

Hurricanes like Dorian challenge the company to keep improving its designs, Linton added. But Linton said opting for sturdy materials and circular construction is still the best bet for hurricane-safe houses.

"Short of building a concrete bunker, there's really not much else that you can do," he said.