South Africa’s biggest boat builder, Robertson and Caine, delivers approximately three new luxury catamarans to the international market every week. And next year the company expects to produce and sell in excess of 200 high-end boats – all of which will be locally designed and built.

This volume, and a full order book until well into 2020,  is thanks to an exclusive distribution deal with specialist travel company Travelopia. That deal also means that if you’ve recently been on a sailing trip in the Mediterranean, Caribbean, or Seychelles, there’s a good chance you boarded a catamaran that had its beginnings in a busy Woodstock shipyard.

Robertson and Caine produces just six different types of catamarans of varying length under its Leopard brand. And although they usually make their way into the international charter world, if you’re in the market for a new vessel, they can also be bought outright and delivered to a jetty at the V&A Waterfront.

Although its focus is primarily on the international market, Robertson and Caine managing director Peter Giliam says this is part of the strength of the brand.

“You can climb onto this boat in Cape Town and sail across the ocean,” he says. “In fact, that’s how we used to deliver them. But as the volumes increased we could no longer do that.”

Instead, most of the company's boats are now driven ready-to-sail to the nearby Royal Cape Yacht Club, where they have a dedicated berth. They then sail them around the corner to a dock at the V&A Waterfront, where up to 16 at a time are loaded onto a freighter and delivered to customers around the world.

Building boats from scratch – and by hand, for now Each one of Robertson and Caine’s boats is designed and built by a large team at its Woodstock shipyard, a giant warehouse-type facility located a few metres from the city’s old shoreline.

The boats are all cast in fibreglass from massive moulds. At this stage the boats look like little more than giant plastic toy kits, but as they move through the facility a crew of hundreds of craftsmen and women add various features, each one making it look more boat-like.

According to Giliam the aim is to streamline this process significantly in the coming years. At present, boat-building in South Africa is still very much a craft, he says, and he aims to use his background in the automotive world to increase the company’s output.

“We’ve got to get to the point where we can do what the car manufacturing industry learnt a long time ago,” he says. “We are still manufacturing the boat, and we need to get away from that.

"We need to know that we’ve got stability in the basic structure of the hull, and the deck, for example, so that when the boat comes in from the moulding shop to the assembly plant you can more or less just click and fit things together.”

This will eventually involve increasingly more automation at the shipyard - but for the time-being it takes 1,000 people to get a yacht on the water at current production levels.

Breaking the mould every so often

The benefit of these mould-based catamarans is that producing hundreds of near identical boats is relatively easy. But in spite of the captive market and glowing reviews, Robertson and Caine are constantly releasing new products.

“We bring out a new boat range every year within our six ranges,” says Giliam. “So we’ve got a six year cycle to renew all of our boats.”

These regular updates are significant, too. Almost out the door of the Woodstock shipyard is the very first edition of their new 53-foot power cat, which Giliam says is replacing their 51-footer.

“This latest version is slightly bigger,” he says. “And the new boat is also substantially more luxurious. The whole look and feel and function of the boat has changed substantially, and the whole design has changed quite a lot.”

New boats start at R6 million - before any extras 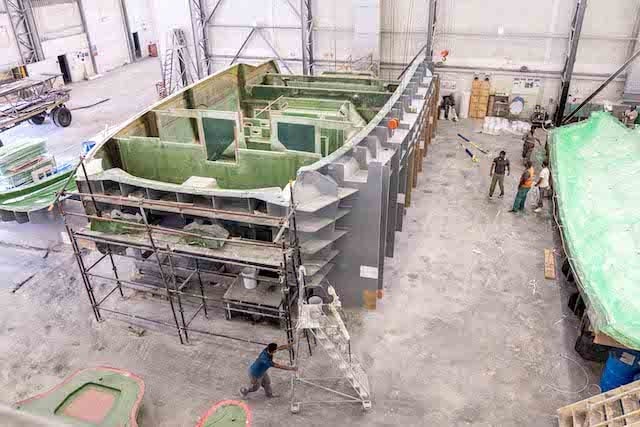 At the entry level of the Leopard offerings is the 40-foot sail cat. It can be configured with three or four cabins, and starts at approximately R6 million.

At the top end of the product line is a massive 58-foot catamaran. This flagship sail cat can be configured to have between three and six cabins, and it comes in at approximately R20.2 million – before you’ve added any extras

If you want to pimp your new yacht to the most opulent level, though, you’ll need to fork out quite a bit more cash.

All of the Leopard catamarans can be customised to suit most high-end requirements, with extras available extras incuding carpeted corridors, electric toilets, air-conditioning, a leather-covered steering wheel, flat screen TVs in the bedrooms and saloon, entertainment systems, fish finders, and even underwater lights

Throw in enough of these extras, and you’ll have a boat that can get you across the harshest waters in total luxury, but you’re looking at a price tag in excess of R25 million.

If that’s a bit too rich for your blood, there’s also a unique business model that works out slightly cheaper.

“Travelopia has an ownership agreement that allows the owner a certain number of weeks of use per year,” says Giliam. “After five years the boat is refurbished, and the owner takes over his boat.”

Custom-built boats will take a minimum of three months to arrive at the V&A Waterfront. If you can’t wait that long, or you’re looking for better bang for your buck, there’s a growing market for used Robertson and Caine boats around the world, on the Leopard Brokerage website. There you’ll find used Leopard yachts for anything from R2.1 million for a humble 2005 40-foot yacht, right up to R24.4 million for a 58-footer built last year.

Although even used Robertson and Caine boats price most South Africans out of the market, it’s not an issue that concerns Giliam, thanks to their good relationship with their international buyer.

“It’s a good business to be in,” he says. “We add value in rand, and we sell in dollars. I wouldn’t say we are independent of the economy, but we’re very dollar dependent.”

And in spite of the impressive output from the relatively small shipyard, Giliam believes the company is just getting started.

Related Links
Lexus just unveiled its first-ever luxury yacht, a sleek watercraft that'll cost about R53...
A R5.9 billion yacht rumoured to be owned by Jeff Bezos went viral, but Amazon says it’s not his
Take a look: Rafael Nadal just bought a custom luxury yacht that boasts a spa pool and a wet bar
Next on Business Insider
Russia moves to stop foreigners from using the services of its surrogate mothers