Brain-eating amoebas are thriving in US rivers and lakes. The problem is getting worse every year 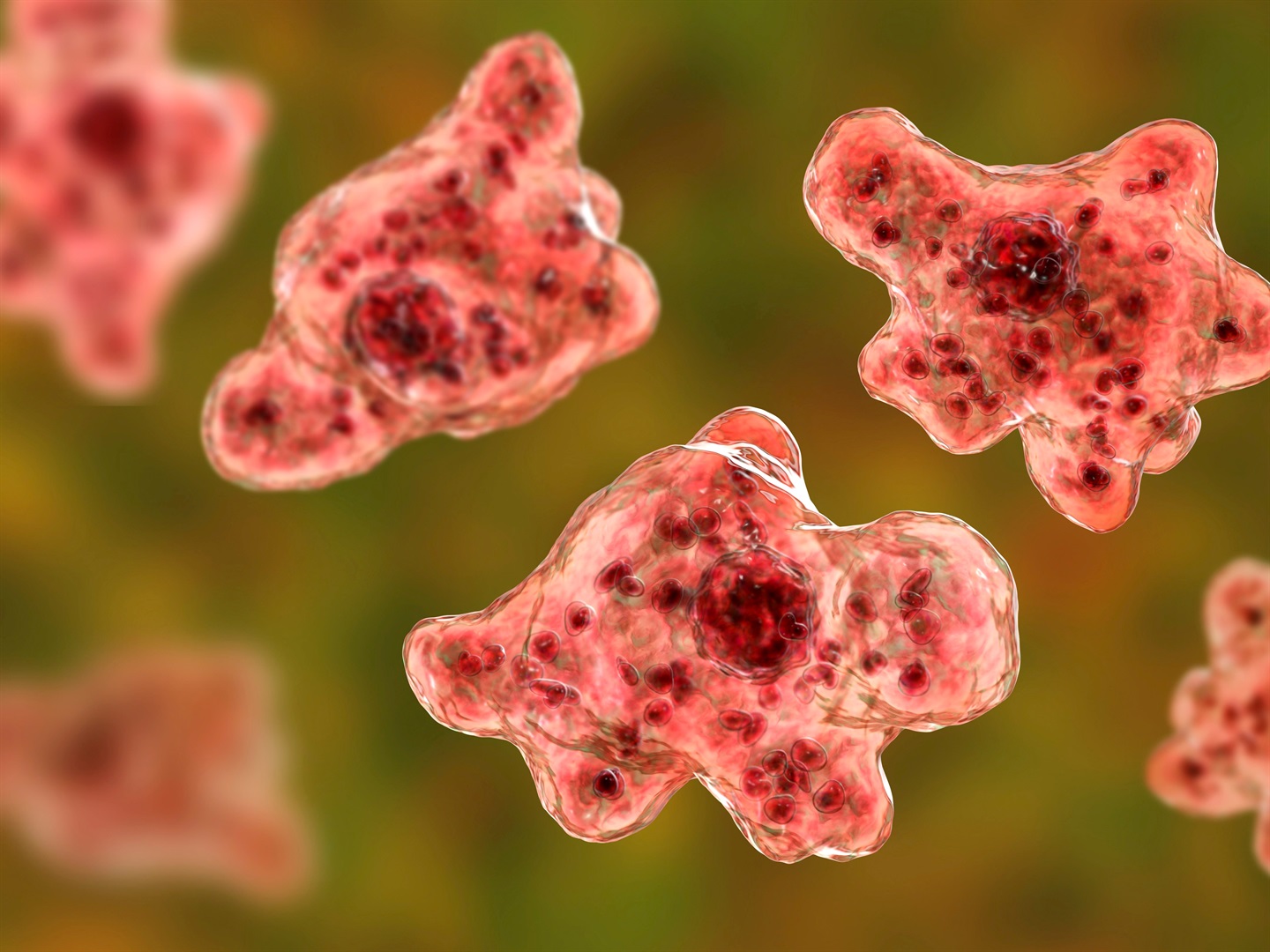 3D illustration of Trophozoite, the infectious form of the parasite Naegleria fowleri.
Getty

In July, Florida residents were told to swim with nose clips and avoid nasal contact with tap water after someone was infected by a rare brain-eating amoeba.

Now, officials in Texas are testing the water supply in 8 cities, following the death of a 6-year-old boy. Health officials since found evidence of brain-eating amoeba in a hose at the boy's house in Lake Jackson.

If inhaled through the nose, Naegleria fowleri, a heat-loving, single-celled organism, travels up the olfactory nerve to the brain, where it rapidly multiplies and begins feasting on brain tissue. In 97% of cases, it's fatal.

Infections have been relatively rare in the United States (the CDC has recorded 145 attacks since the 60s), but some experts say they are becoming more common as waters across the northern hemisphere heat up, becoming hospitable for these deadly parasites.

Two children in Minnesota died from N. fowleri in 2010 and 2012 — both cases "550 miles north of the previously reported northernmost case in the Americas."

"Through the first several decades that we tracked it, we really only knew of cases in the southern tier of the US," said CDC epidemiologist Jonathan Yoder. "But in the last 10 years we have identified cases in additional northern states, like Indiana, Minnesota, Missouri, where we had not previously seen cases."

N. fowleri is harmless when swallowed, but fatal when inhaled

Ever since 1970, when Australian researchers gave this brain-eating amoeba a name, reports of deaths caused by N. fowleri have made the news almost every summer.

N. fowleri enjoys the warm freshwater of states like Arizona, where it feeds on bacteria found in lake and river sediment. It is known as a "free living amoeba," meaning it doesn't require a host. If humans accidentally drink the amoeba, it's harmless. But if it makes its way inside a nasal cavity, it's lethal.

The microscopic amoeba will travel up the nasal cavity to find a food source, arriving at the brain. Once it's feasting on brain tissue, the body's immune system sends white blood cells to fight, leaving the brain swollen, usually to a fatal degree.

Victims usually die within a week.

Symptoms are similar to meningitis, so it's easy for patients to get misdiagnosed and mistreated

"When you go to your doctor and you say, my head is pounding, I'm sensitive to light, my neck is killing me, that's also the symptoms of meningitis," Bowling Green University associate professor Travis Heggie, who directed public safety programs for the US National Park Service from 2004 to 2006, told Insider.

"They'll start treating it as meningitis, and you'll be two or three days into a treatment for meningitis, and boom, you realize that's not working. And by that time it's too late because a person will either be dead or brain damaged."

In 2013, two children became the 21st century's first survivors of this parasite, because they were treated rapidly with breast cancer drug miltefosine. One, a 12-year-old girl, returned to school, but the other, an eight-year-old boy, suffered brain damage.

They are two of only four American survivors.

There may be more cases than recorded CDC official map of states where cases of Naegleria fowleri have occurred.
CDC

Experts estimate that between 3 and 8 Americans die from N. fowleri annually. Those victims are usually young and male, the demographic most likely to jump into a warm lake.

"It is possible that there are more cases than then are being reported. We do know that it's not necessarily the first thing that a doctor will suspect," Yoder said. "Sometimes we do not find out about it until there's an autopsy and we test the test of brain tissue." In 2018, the CDC attempted to answer this question, examining autopsy data of children.

They estimated 16 US children are killed by N. fowleri annually — double the official tally. "We have debates with the CDC quite often, because the CDC is always saying it's a rare disease, not to scare people,"  Heggie. "My main beef with that is it's not rare. This amoeba is found in soil profiles around the world, and it's naturally occurring."Yoder understands concerns with calling the presence of amoebas "rare." "It's certainly true that we can identify this organism in many warm freshwater bodies, and why it only affects or why we only identify a few cases a year is really unknown because it does seem like it's relatively common in those in those bodies of water," Yoder said.

US waters are getting warmer, and that's good news for amoebas

N. fowleri infections spike in Southern states in the summer as it heats up. The amoeba loves heat, and thrives in temperatures of up to 115°F.But as the world warms, there is more freshwater available at blazing temperatures, giving N. fowleri a greater spread of dwelling options.It's a concern globally — there were 16 N. fowleri deaths in Pakistan in 2019, two in Costa Rica in 2020 — but also in parts of the US that previously would never have been so warm.In a Southern state like Arizona, the typical summer temperature ranges from 90°F to 120°F, perfect for N. fowleri. In a state like New York, typical summer temperatures range from 70°F to 85°F, but that's changing."There is concern if waters continue to warm in northern states there may be more of a risk to people who go in water in those states," said Yoder.The amoeba doesn't just live in lakes.In 2002 an Arizona woman who filled a kiddie pool up with contaminated well-water, inadvertently leading to the death of her daughter.One Louisiana county even had its water system test positive for the amoeba, leading to at least two deaths. One of the victims was a four-year-old boy who let water go up his nose while on a backyard slip-n-slide. The other was a man who used his home tap water in a neti pot.

Americans should 'assume' amoebas are present in warm freshwater A close up of Naegleria fowleri.
Center for Disease Control
There are no standard tests to detect N. fowleri in water, so the CDC recommends that "recreational water users should assume that N. fowleri is present in warm freshwater across the United States."Yoder says the CDC is working with local health departments to expand messaging about safe swimming, and is working with clinicians to raise awareness of N. fowleri so they consider it when patients show up with symptoms. Yoder suggests that people avoid dunking their heads underwater when swimming in lakes, and wear nose plugs while swimming."These are very tragic infections, often leading to death," said Yoder. "We think there is a very important role that we can take in understanding the science behind why it lives where it lives and how to prevent infection in people."Read more: A rare case of brain-eating amoeba has been confirmed in Florida. Officials are telling residents to take precautions with tap water and to swim with nose clips.