Planking never got easier, but I did feel a bit different by the end.
Madison Vanderberg

I tried to plank for five minutes each day for a month and it was far from what I expected.

When I first began the challenge, it seemed like a slam-dunk since I didn't need any equipment, I could plank at home, and I've always thought of myself as relatively in shape.

I very quickly learned that five minutes is an excruciating amount of time to hold plank position and that I have very little stamina and, apparently, a gigantic lack of willpower.

Read on to see how I fared during my 30 days of trying to plank for five minutes.

For this challenge, I'd be doing standard forearm planks, which use one's own body weight to strengthen their core, back, and legs.

But even though planks sound simple, they can be tricky - so I decided to consult with Chris Baron, the personal training director at my local LA Fitness, to learn about the correct form for this move.

Immediately he told me that my form was incorrect because my shoulders were "popping up." This was easily fixed by pulling my shoulders forward and pushing my back up. 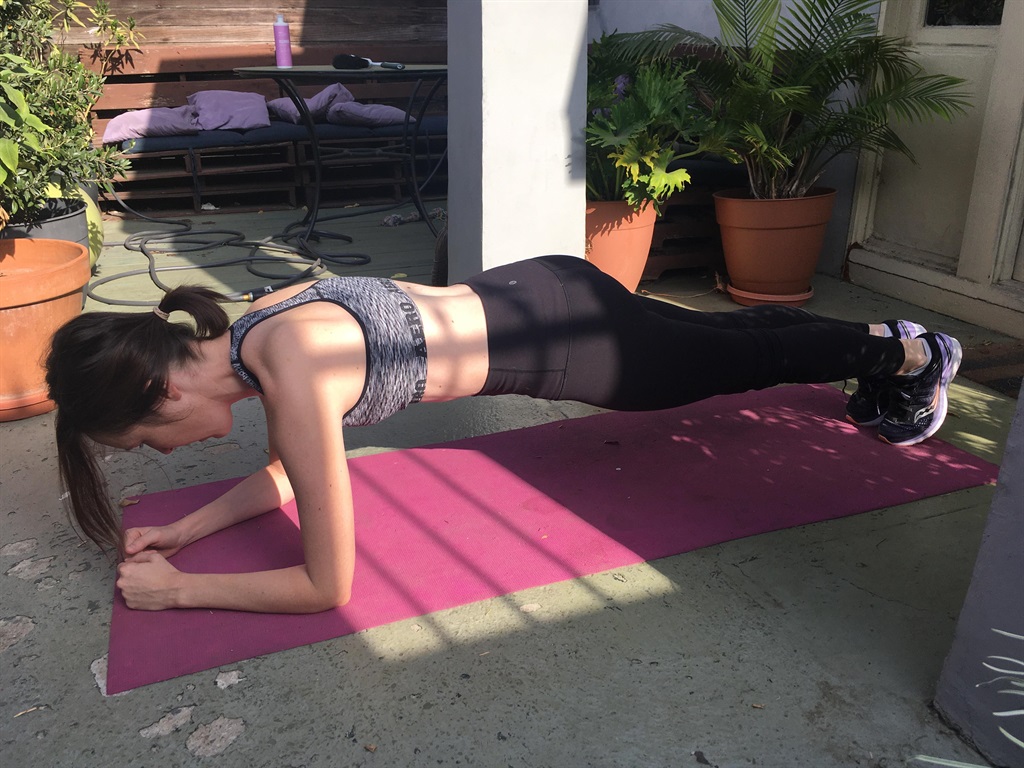 First, I nailed down the proper form.
Madison Vanderberg

"Your elbows should be in line with your shoulders, your arms should be bent, and your hands should be in front of your face around eye level," Baron explained.

He also said my hips should be close to my shoulder height and that my entire back should be straight, not curved.

With his help, I corrected my form and kicked off the challenge.

On day one, I learned that planking for a minute is hard enough

On the first day of the challenge, I rolled out my yoga mat in the living room, set my timer for five minutes, and stretched out into plank position.

I was prepared to surprise myself with an amazing ability to hold a plank - maybe I'd even learn to like planking and find it meditative!

Feeling hopeful, I got into plank position and held the pose for what felt like an eternity, but when I checked the timer and saw that barely 80 seconds had passed, my optimism took a major hit.

The next few days were not much better. I dropped my knees to the ground about four times per session and was still only planking for around three minutes, total.

Having failed the first week, I went on a journey to figure out how I could modify the plank to make it easier Even with my pseudo-yoga modification, I was still struggling.
Madison Vanderberg

After a few days of not getting any closer to the five-minute mark, I decided to pull from my yoga knowledge and try a "modified" version of a plank that I'd learned about in a previous class. It includes dropping your knees to the ground before holding a plank.

Even with the modification, I struggled to hold the pose for more than three and a half minutes. And so, I consulted with Baron again, who told me that my pseudo-yoga modification is not a plank at all.

Instead, he told me to try a side-arm plank, where you start in plank position and then shift your weight to one arm. The side-arm plank wasn't easy, but I could breathe better.
Madison Vanderberg

Baron said this position can seem more doable because it's easier for your body to breathe when you're posed like this.

"You're opening up that thoracic-cavity line in a side-arm plank," he explained. "The diaphragm's not deflated and you can breathe a little more."

It was easier than a forearm plank, but it was still tough.

During week two, I changed up my routine and had a grand revelation

But even by breaking up my plank and allowing myself to rest, I was still struggling to last more than three and a half minutes total.

I lamented to Baron once again and asked if any other exercises could help me plank longer or if there were any other modifications to try, but he simply told me that if I want to do a five-minute plank I "just need to do it."

He compared planking to learning to write or ride a bike, in that you just have to practice to get better.

"If you want to get better at planking, you need to plank," Baron explained, adding that planking should get easier as my body adapts to the move.

The idea that planking is something I could "learn" seemed to reset something in my brain and I stopped being so hard on myself and thinking of myself as weak.

I convinced myself that planking was no longer a physical hurdle, just a task or a chore that I had to repeat to get better at ... but this mindset didn't last.

By week three, planking wasn't really getting easier - even with my fresh mindset and special modifications 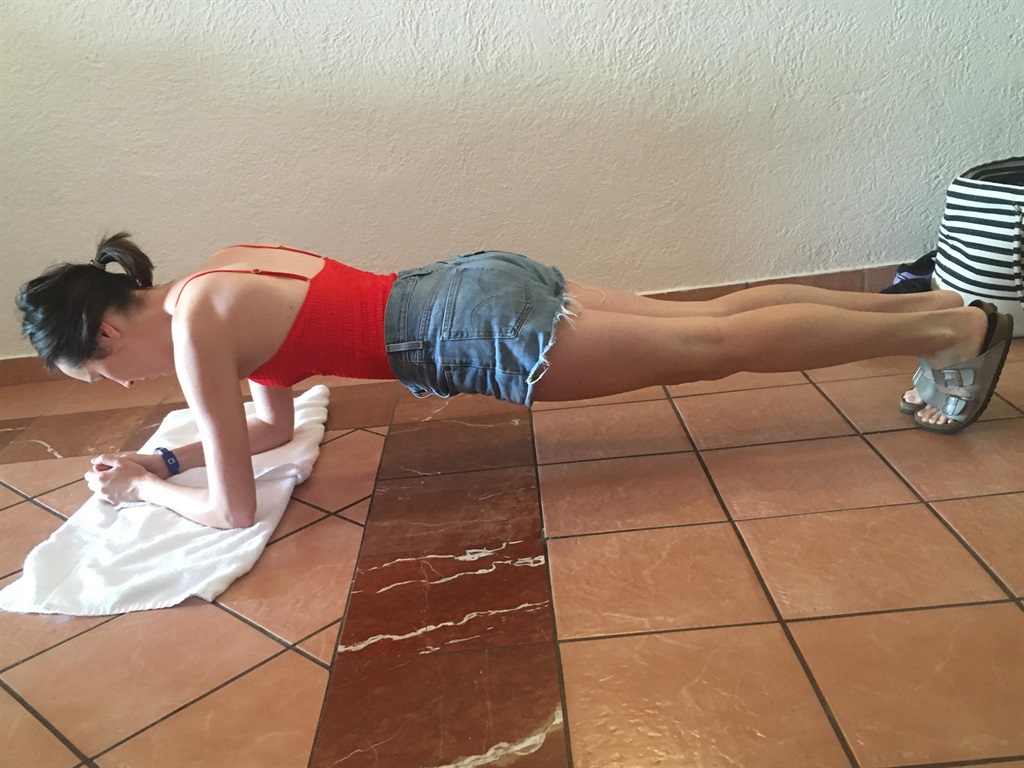 I planked all over the place, but I still struggled to keep up.
Madison Vanderberg

I even planked while listening to podcasts in the hopes that I could distract myself into planking for longer than usual.

And even though I was now able to plank for about four minutes total per session, I was still putting my knees down after 60 seconds and I still needed to take several breaks.

By the end of the month, I was finally (sort of) able to do a five-minute plank

During the final week, about four days before the end of the month, I finally did a five-minute plank ... sort of. I wasn't technically planking for five minutes straight, but it was close enough in my book.

For the final few days, I followed my recipe and planked for about five minutes each time. But on the final day, I did a three-minute plank and simply collapsed on the ground.

After 30 days, planking never got easier and I didn't feel stronger - but my core felt tighter Pictured is me on day one and me on day 30.
Madison Vanderberg

When I look at my before-and-after photos, I notice the slightest bit of tightening throughout my core, which is nice, but it's not what I set out to achieve.

I had hoped that the experience would teach me that I was stronger than I thought, but I think I just got used to planking or, as Baron explained, my body adapted.

There was never a day when I felt like planking was becoming easier, and every second of every plank was just as hellish as the day before.

But the challenge did come with a surprising benefit - I noticed that planking made my back feel pretty great.

I don't have back pain, per se, but I do sit in front of a laptop for about 10 hours every day. On the days that I planked during my lunch break, I was surprised by how much stronger and more recharged I felt when I sat back down at my desk.

But, as I learned later, it's pretty common for planking to be associated with back-pain relief - Baron explained to me that planking strengthens the core, which can help support one's back and spine.

All in all, I don't exactly recommend this challenge if you're trying to seriously build strength or if you're looking for shortcuts (there aren't any). As Baron told me, if you want to plank for five minutes, you just have to do it.