Reddit day traders wanted to beat Wall Street to prove the system is rigged. Instead, they did it by losing. 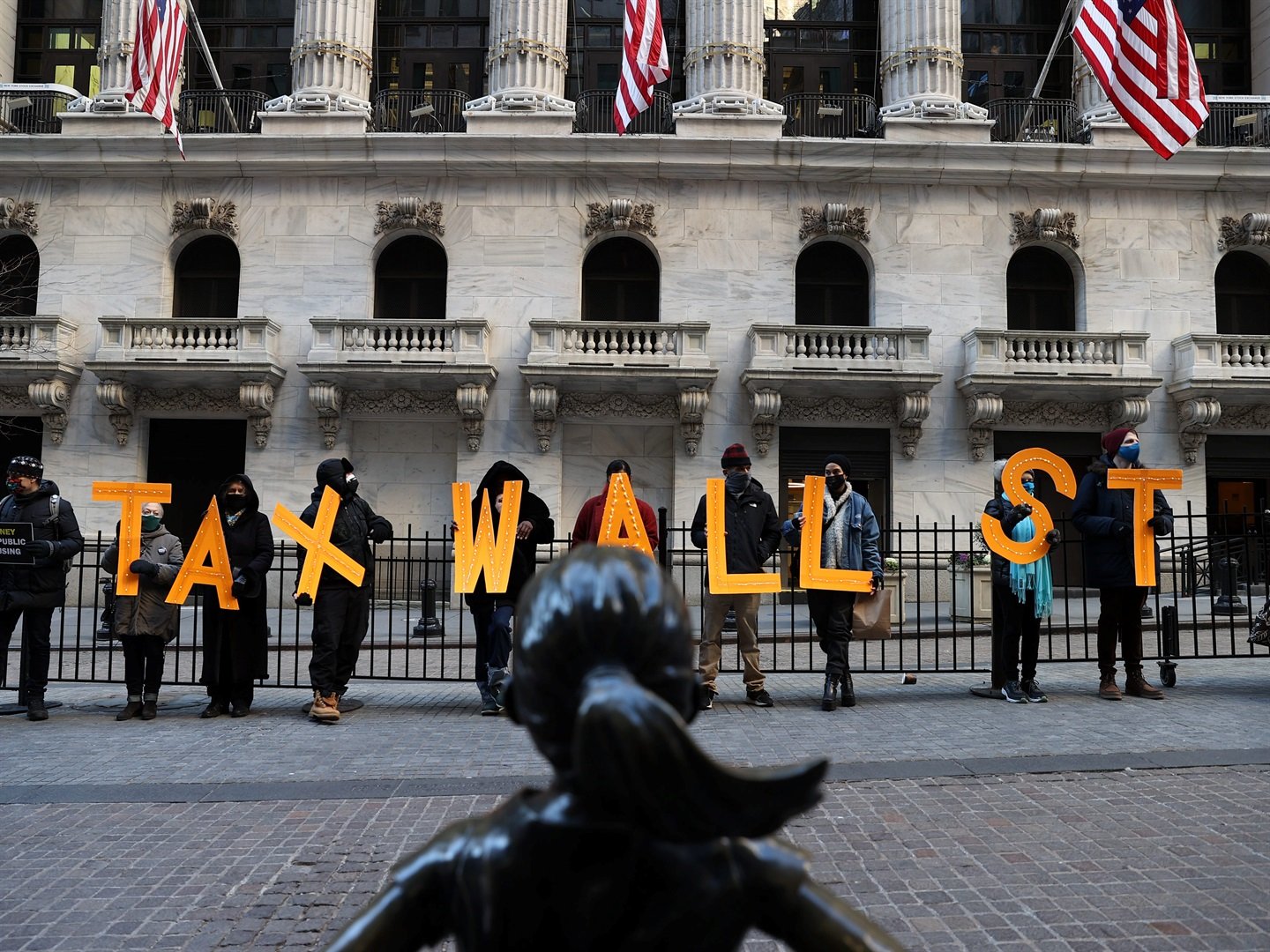 Keith Gill, the day trader and member of Reddit group WallStreetBets who is widely credited with igniting the recent GameStop trading frenzy, claimed in late January that he had turned his $54,000 investment into a $48 million dollar fortune.

Days later, it had been sliced by more than half to $22 million, and regulators had set their sights on Gill, investigating him over potential disclosure violations.

Many retail investors fared far worse. One Robinhood user lost $70,000 in savings and contemplated committing suicide. Another, Alexander Kearns, did.

GameStop's stock, which had peaked at more than $480, had dropped to around $52 as of Friday.

Before the rollercoaster went off the rails, however, one hedge fund walked away with a $700 million profit, brokerage app Robinhood raised billions in new financing after being forced to restrict its users from buying stocks, and trading giant Citadel likely made a hefty sum from the increased market volatility.

While the dust has far from settled, and some Wall Street firms did lose big, a David versus Goliath victory now hardly seems like the most likely outcome.

It had made for a compelling narrative, too: an army of retail investors - without deep pockets, sophisticated trading algorithms, proprietary market data, or other tools of the trade - banding together to beat powerful, corrupt financial institutions at their own game.

Ultimately though, Wall Street and other big-money investors still appear to have ended up on top, and experts, at least those outside the industry, say it's that outcome that further proves how the system is rigged.

Insider spoke with three experts on financial markets - none of whom work at traditional financial services firms. They said there's a lot of work to be done to make the markets work for small investors again, and, just as importantly, to restore the public's faith that the markets can do just that.

"Geared to favour the big"

"The whole business is basically a power dynamic… it's geared to favour the big over the small," Garphil Julien, a research associate with the anti-monopoly think tank Open Markets Institute, told Insider. "Those with enormous amounts of capital, enormous amounts of money, will use their power to basically get what they want, and when they get what they want, someone else is going to lose," he said.

He's not alone in that assessment.

According to a recent CNBC poll, a record-breaking 57% of Americans view the stock market as a reflection only of how corporations and the wealthy are doing, not the rest of the country. That's true among financial elites and Republicans as well, both historic defenders of the free markets.

"Is the market really fair for individual investors? Is it really competitive? What we're seeing is that it's not," Julien said.

As former Wall Street analyst Alexis Goldstein recently put it in an op-ed for The New York Times: "Wall Street's edge over retail traders remains, as always, structural," and even if a bunch of Redditors band together, "the house still wins." But, she argued, "rather than gambling on the dubious promise of more Americans gaining access to the casino, it's time to rewrite the rules to ensure that the house doesn't always win."

Julien said that means adding more consumer protections, as well as cracking down on the monopolization of various segments of the financial services industry. For example, he pointed to brokerage apps, like the Morgan Stanley-owned E*TRADE and TD Ameritrade, which is owned by Charles Schwab.

Another problem underlying the GameStop saga is that too many Wall Street firms have gotten into businesses that are inherently designed to extract as much money as possible from the financial system for their own gain, rather than helping allocate it toward uses that would help the economy overall.

Amid last month's trading frenzy, the markets ultimately proved fairly resilient, but that doesn't mean they're working in ways that protect smaller investors who have more to lose.

Roper said it's good to focus on improving transparency and accountability around practices that may involve conflicts of interest, such as payment for order flow, over which Robinhood and Citadel are both facing scrutiny, but that the issue is also far more fundamental and widespread.

"The financial services industry itself has sort of divorced itself from the more boring and less profitable job of helping to steer capital toward its best uses in support of the productive economy, and has for some time now, made most of its money making money," Roper said.

"Financial firms make all of their money off of securitizing everything under the sun," she said. "They found a way that it's really profitable, and so they're pursuing the profits even though the niche is overfilled."

Since then, there have been multiple near-crises and the problems have only gotten worse.

Robinhood itself has been criticized - and fined $65 million by the Securities and Exchange Commission - over high-frequency trading, a controversial practice that uses powerful software to execute large trades in fractions of a second, allowing firms to make money off momentary changes in the price of stocks. Wall Street banks are even evading regulations around derivatives trading - the same risky behavior that precipitated the 2008 crisis - according to financial blog Wall Street On Parade.

"If we didn't do it when Wall Street literally brought the global economy to the brink of collapse, I don't think we're going to do it now because some people on Reddit put on a short squeeze and caused some chaos in the markets for a few weeks," she said. "I guess I'm as cynical as the people on WallStreetBets."

Part of Americans' frustration with the current financial system is that it has become so complex that only Wall Street insiders really seem to know how everything works, something the industry uses to its advantage to dodge blame in situations like GameStop.

"It's another episode similar to those past ones of the public feeling like there are multiple things wrong here - not really know what is exactly wrong, but just feeling like something is not working," Graham Steele, senior fellow at the American Economic Liberties Project, told Insider.

"It's just a general popular sense that a system wherein this kind of scenario can come to pass, just fundamentally doesn't work for the public and it is 'rigged,' or something else, but they know something is wrong."

Steele also said widening inequality, pandemic response failures, and polarization around the election amplified the GameStop fury: "It feels like you're layering a new financial episode on top of other, broader public outrage."

That's also apparent in the voices from across the political spectrum that have criticized Wall Street in recent weeks: progressive Democrats like Rep. Alexandria Ocasio-Cortez and Sen. Elizabeth Warren; far-right Republicans like Sen. Ted Cruz; and tech investors like Elon Musk and Mark Cuban.

But that's where their agreement ends, with Democrats typically favoring government intervention, and Republicans typically pushing for more transparency and then letting the markets figure out the rest.

"In terms of the Silicon Valley folks," Steele said, they're "painting themselves as kind of populists, but a lot of them have their own sort of financial interests at stake here. A lot of their solutions are like, don't use that app, use the app that I invested in."

"I just don't see Elizabeth Warren going out there pumping someone else's trading app because a venture capitalist has said, 'that's the right thing to do,'" he added.

Elon Musk, for example, has spent the past few weeks hyping up cryptocurrencies like Dogecoin.

Ultimately, all three experts agreed that making the markets more equitable and aligned with the health of the broader economy will require reforms stretching far beyond the financial services industry.

"Fixing that system requires a whole host of policy solutions that run the gamut from financial regulation to tax policy to how we structure the retirement system to how we deliver healthcare to people," Steele said.

Related Links
Reddit's CEO says investment advice on the social network is 'among the best'
An ETF is being launched that will track social-media buzz driven by platforms like Reddit
GameStop's Reddit-driven surge exposed shocking market vulnerabilities, Goldman Sachs says
Next on Business Insider
Captive lion operators to be offered a ‘voluntary exit’, which may not see the lions put down