RANKED: All of the weird rusks from Woolworths Woolworths now has an impressive array of 30 types of rusk products, and has fearlessly ventured where no rusk-maker has gone before.

In particular, its waffle, doughnut, cinnamon roll and banana bread rusks have raised some eyebrows.

Business Insider gathered a team of intrigued volunteers, comprising of rusk purists and the avant-garde, to test the rusks.

We asked them to score the new biscuits on taste, texture and ‘dunkability’. Three were clear favourites - and one failed miserably in the ‘dunkability’ category.

Here’s what the tasters found:

The least favourite: the doughnut rusk. Tasters thought the rusk was too hard and difficult to dunk.

“The texture is too dry, it doesn’t crumble in the way a real rusk should. It is also too big for a rusk – it’s more like a meal. And also very messy, cinnamon and sugar everywhere,” said one taster.

Aesthetically its shape was pleasing and surprising. However, more than one taster remarked the rusk was too big to dip into a standard sized mug. “With sprinkled sugar granules on a glowing brown ring, it looks like a soft sugar doughnut. But let’s talk logistics…you have to have a pretty big mug, in all sense of the word, to down this. Reminiscent of a Mr Bean skit, I tried to twist this hard rusk at different angles to dunk it into my tea, only to end up back where I started.”

Anothere taster said: “The rusk is sort of impractical, I may not be able to dip it into a cup because of its shape. Certainly not ‘dunkable’. Maybe if they were made into smaller pieces.”

Attempting to break the rusk in half led to more disaster as it results in a ‘crumb explosion’.

“Once I had eventually secured a tiny portion of the rusk into boiling hot liquid (I won’t talk about the burn wounds), it was rather scrumptious. Would be great if they had mini doughnut rusks.” Our scorers gave it a low passing grade. The lovers enjoyed it:

“Yummy. Texture not too hard, so don’t even need to dunk. Definitely my fave!”

“Don’t let the meh colour fool you, this packs a banana punch. Perfect size – not too big or too small, very satisfying. Hugely dunkable."

The haters said it veered too far from the real thing:

“I found it had more of a subtle sugar and spice flavour which might appeal to those with unadventurous palates in the morning. Not unpleasant but still not like the still steaming baked Banana Rama combo in South African kitchens.”

“For some odd reason, there was some dull taste to this. Yes, you can taste that it’s banana bread, but maybe banana bread isn’t meant to be a rusk.”

The waffle rusk scored a high mark - but it was also the most contentious. The most contentious rusk was the waffle rusk. There were the purists who could not accept it was a rusk:

“A dried-out waffle is not a rusk. A rusk is a specific recipe and this does not count. It is tasty, but too hard to bite and too soft to dunk. Fail. Don't insult rusks with this fakery.”

Many tasters commented that the rusks were too hard to eat by themselves and needed to be dunked. However, this was not enough to affect the grades.

Generally the waffle rusks scored very high. One taster said the rusks brought back memories of munching syrupy waffles at Milky Lane as a kid and dipping stroopwafels in tea on cold mornings in the Netherlands as an adult. Another commented that this was the one rusk that will ruin your beach body.

“It was creamy, soft and sweet after being soaked in black tea. The elongated shape made it easy to dip but I didn’t enjoy biting into the hard waffle gaps,” said one.

“I would recommend this to anyone. It really is a waffle. Loved it,” said another.

“The waffle rusk is very close to a buttermilk rusk except it’s perhaps a bit chewier, I suppose because it has syrup added to it? Would definitely buy it, especially if you’re a waffle fan!”

In first place was the cinnarusk, which won the hearts of most of our tasters. 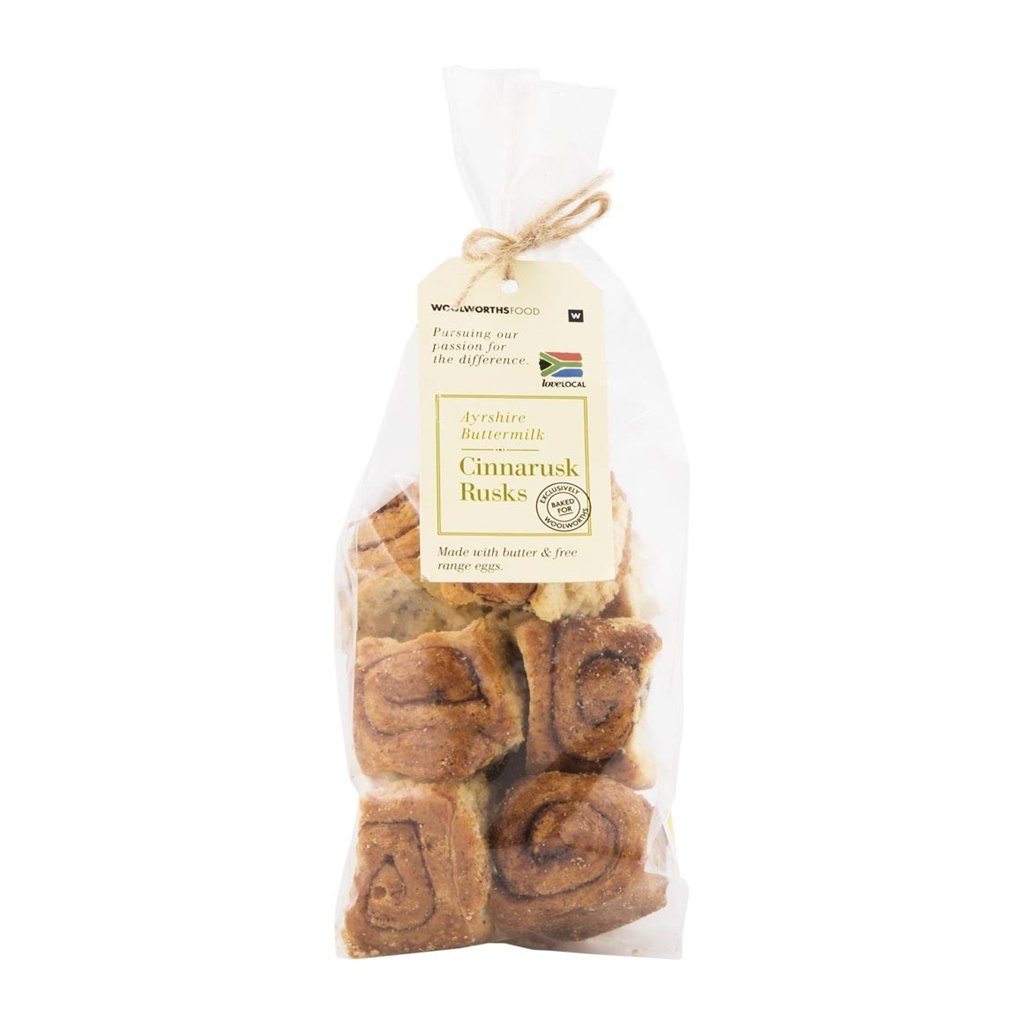 “If you can power through a bag of rusks like yours truly, this is a lovely treat – crumbly rich, crust with a hint of cinnamon. Definitely not a stale box of Ouma rusks at the end of a semester in boarding school. Very tasty. Especially on a cold day like today. Might go buy a packet right now. Yumzer,” said one taster.

It proved delicious both dunked and undunked, and filled with complex flavour.

“A bit on the dry side, but the taste and texture are great. Woolworths didn’t spare the cinnamon, you can taste it in each bite,” said a taster.

But tasters still felt like they were cheated out of the icing from a real cinnabon:

“This rusk immediately enticed me with its rounded, cinnamon bun appearance. I was however, ‘cinna-cal’, about whether it could match up to its sinfully delightful sickly-sweet bun counterpart. Sadly, it ended up being the poor cousin with its mild cinnamon flavour. Not bad though,” said one taster

“Could do with some icing, but I like it regardless. Couldn’t put it down and didn’t need to dunk it each time,” said another.

Verdict: 3 are a hit, pass on the doughnut. Our tasters were genuinely impressed with Woolworths' bold move to reinvent the rusk. The outright favourites were the waffle and cinnamon-bun flavoured rusks. The consensus view was that a smaller version of the doughnut rusk would go down a treat.

Related Links
There's now evidence that junk food like pizza and chips could reduce your sperm count, but...
We paid R130 for the American plant-based Beyond Burger that has created a R100 billion company –...
KFC is ditching plastic straws in South Africa – but it could be years before its stores are...
Next on Business Insider
13 benefits of sex that can improve your mental and physical health