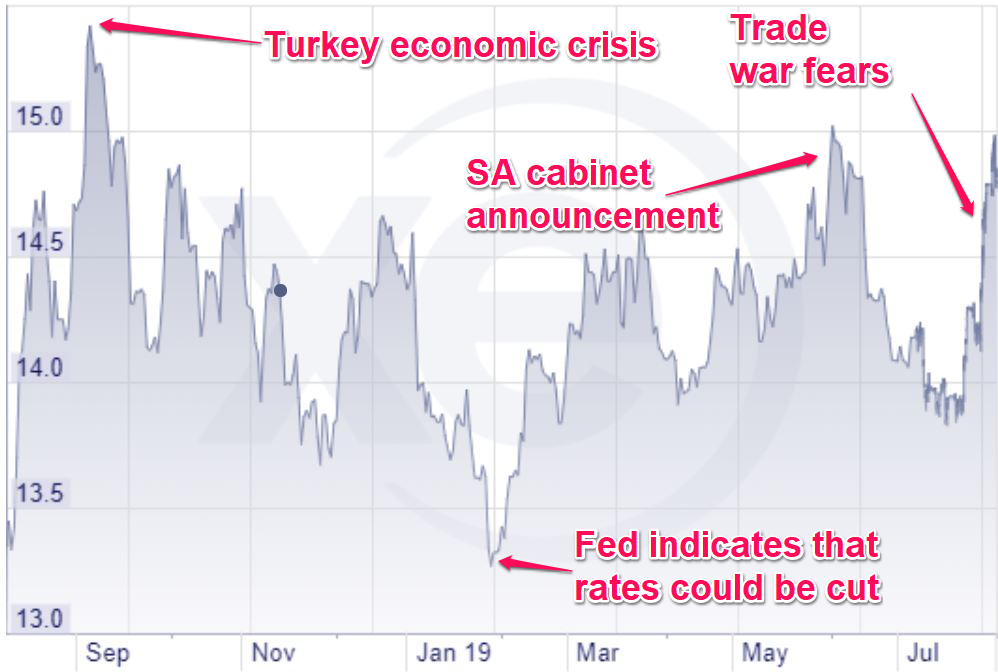 Fears about a trade war between China and the US have sent global investors scurrying towards safe investments – and far away from anything risky, like emerging market currencies.

This (along with some local drama, including worries about Eskom’s massive debt burden) has wreaked havoc on the rand: the local currency has weakened by a full rand in the past two weeks. In the last week of July, it was worth R13.88/$; on Monday, it almost reached R15. It recovered somewhat to R14.78 by Tuesday afternoon.

In theory, all things being equal, an imported iPhone XR, which cost R14,999 at the end of July, should now be R1,100 more expensive.

This, of course, is not how things work: most imported products do not immediately cost more because of the rand slump. Companies fix prices at the currency rates months before they take delivery. The impact of the shock rand slump on imported products may only be felt in some months down the line – and perhaps not even then.

In fact, much of the impact of the rand depreciation may be muted due to other factors.

Fuel is South Africa’s biggest import product. If the rand weakens, oil – which is priced in dollars – is immediately more expensive.

However, oil prices have been dropping too, along with the rand. A cooler global economy won’t need that much fuel, and markets are betting that demand will be softer in coming months. Brent crude oil, which was trading around $65 a barrel at the end of July, is now below $60.

It could go even lower: Bank of America Merrill Lynch warned this week that the oil price could fall to $30 if China decides to ignore US sanctions and started to buy Iranian oil.

The rand/dollar price has a direct impact on grain prices: South Africa’s maize and wheat prices are linked to the global dollar prices, and have already climbed following the rand slump.

This should lead to higher pap and bread prices, with increases in maize and wheat prices usually taking about three months to feed through the value chain to the end consumers.

However, in the long term, dollar-based maize and wheat prices may come under pressure after China decided to stop buying US agricultural goods in retaliation against looming new US tariffs on Chinese exports. Soybean prices have plunged in reaction.

US Corn below $4.00 a bushel which (should) be good news for SAFEX yellow maize (now R2,754/ton) BUT tanking #Rand (near -6% past week) not helping local YMZ & local big input users All waiting for August 14 @USDA planting report to see corn direction pic.twitter.com/8OLc4Mzs8r

The price of electronic equipment is directly and strongly affected by a weaker rand. But these kinds of products are becoming cheaper around the world which should mute some of the impact, says Odendaal.

In addition, local customers are so hard-pressed that retailers will struggle to pass on price hikes.

Usually, the South African Reserve Bank is very skittish about a weak rand and would not cut rates in the face of a falling currency, says Odendaal. A weak rand traditionally leads to higher inflation, which is monetary-policy kryptonite.

“But context is important. If the currency is weaker in response to a global economic slowdown that would outweigh inflation fears.”

That means that the weaker rand may not automatically rule out a further cut when the monetary policy committee meets in September.

Given the decline in the value of the rand and new fears about a global slowdown, a Moody’s downgrade of South Africa’s credit rating now looks inevitable. That would strip us of our investment grade rating, and our government bonds would be rated as “junk”, meaning that some of the largest investors in the world won’t be able to buy South African bonds.

A downgrade from Moody’s will probably spark a selloff of the rand and local bonds – but it shouldn’t last that long before the market stabilises, predicts Odendaal.

“To a large extent, the downgrade has already been priced into the rand and local bonds.”

Also, the rand should strengthen from current levels, he believes.

The market has just had a massive shock: It did not expect US president Donald Trump's move last week to slap a new 10% tariff Chinese goods. It also did not expect the Chinese to strike back with a sharp devaluation of its currency (which was sanctioned by the Chinese government) and a reported ban on importing US agricultural goods.

Once the dust settles after this initial shock, global investors will wake up to the fact that interest rates around the world are extremely low - while rand assets still offer a solid yield, says Odendaal.

Related Links
Obama advisor Larry Summers warns the world is at 'most dangerous financial moment' since 2009 as...
There's a 'very real chance' the slump in the pound is just getting started
Deutsche Bank reportedly flagged Epstein's suspicious transactions to US financial watchdogs
Next on Business Insider
An unknown Chinese buyer spent R6 billion on ships for risky Russian oil transfers on the high seas