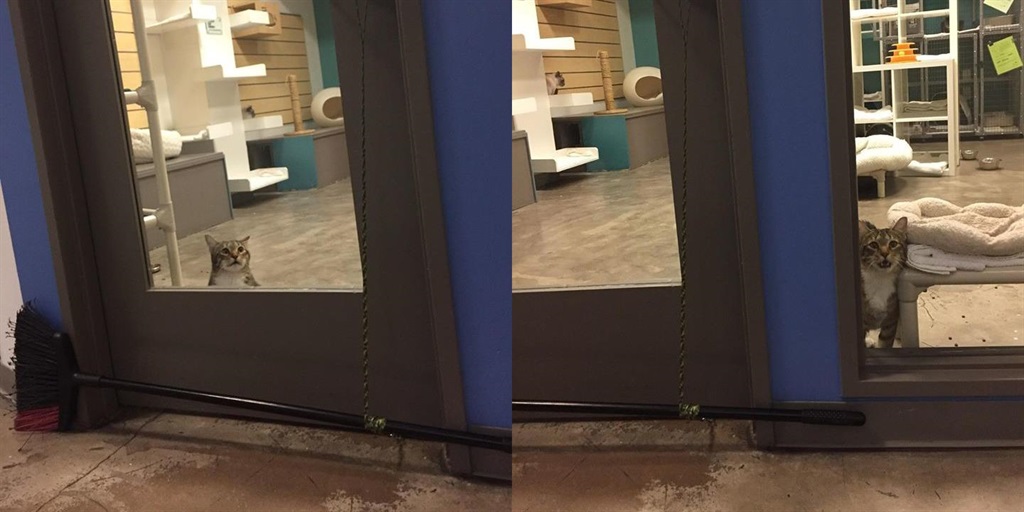 Bold revolutionary, strident rule breaker, clever kitten. A 6-year-old rescue cat was put into solitary confinement at a cushy animal shelter because he wouldn't stop helping the other cats escape.

Quilty the cat has been staying at the Friends for Life Animal Shelter in Houston, Texas, for several months, but hasn't quite quit an old habit of opening doors.

Since Quilty moved in, the door to the shelter's cat room kept mysteriously opening, allowing cats to escape and wander other parts of the building, Jennifer Hopkins, the communications lead at Friends for Life, told CNN.

Security footage revealed that it was in fact, Quilty. To launch his escapes, he would jump up and pull down the handle of the door, opening it for all of his friends.

Eventually, the employees put Quilty in "solitary confinement" overnight while the building was cat-proofed.

The shelter posted photos of Quilty's confinement on Facebook, and the cat won hearts across the world.

The post said that Quilty used to open doors when he lived with a family, so it's likely an old habit.

"Quilty can be a little difficult," Hopkins told CNN, though now people are jumping to adopt him. The Facebook post said

According to Friends for Life's website, Quilty is now on a trial period with a potential adopter.

"He is doing really well. He hasn't tried to hide at all and loves to be in the bed or on the couch snuggled up with one of us," the potential adopter said. "He sleeps under my covers with me like a dog. He doesn't really like the 2 dogs but they leave him alone so there aren't any problems really, he just doesn't want to have anything to do with them. I am hoping with a little time, he will get used to them. He hasn't shown any slickness at all yet; he is the most loving and affectionate cat I have ever met!"

Quilty, settling down at last.