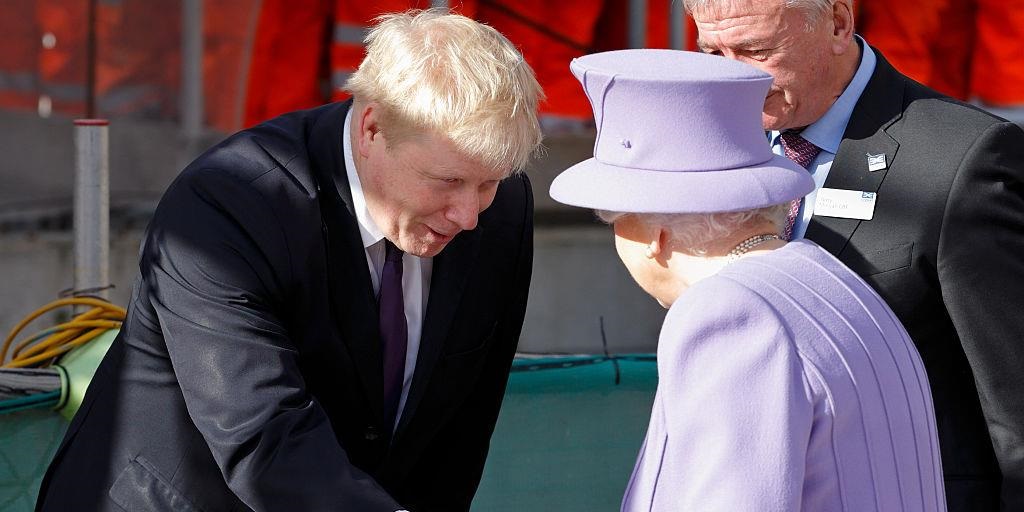 Boris Johnson and the Queen
Getty
Relations between Boris Johnson and Queen Elizabeth have reportedly hit "rock bottom" after the UK prime minister forced her to deliver what constitutional experts have branded a "party political broadcast" for his Conservative Party.

The Queen is due to come to the British Houses of Parliament on Monday to deliver the "Queen's Speech" which sets out a new legislative programme for Johnson's government.

However, the timing of the speech, which comes shortly before an expected general election, is a breach of the traditional constitutional convention in which such speeches are normally made after an election.

The UK prime minister currently has a majority of minus 45, meaning that none of the legislation the British monarch announces on Monday has much hope of getting through parliament before another general election.

This has led to constitutional commentators labelling the speech as a "party political broadcast" for Johnson's Conservative party.

As a result, Buckingham Palace has reportedly taken the unprecedented step of demanding a copy of the speech a week early to ensure that there are no nasty surprises contained within it.

"Number 10 is pretty worried they've hit rock bottom with the palace so they wanted to get the speech in early," one Cabinet source told the Sun Newspaper.

"That left quite a lot of departments upset and in a flap, as a few things weren't ready. It's all been pretty messy and frantic."

Buckingham Palace took the rare step last month on briefing their "displeasure" at former prime minister David Cameron's decision to reveal the details of private communications he had with the Queen's aides.

The Palace was reportedly similarly displeased after the Supreme Court ruled that Johnson had asked the Queen to illegally suspend parliament, with Private Eye reporting that she had expected Johnson to announce his resignation afterwards.

The Queen is set to deliver a 'trailer for the Conservative party's election manifesto.' The Queen will on Monday lunchtime come to the Houses of Parliament to announce a new programme of legislation which Johnson's government plans to implement.

However, there's one small problem:Johnson's government can't actually implement any of it.

Johnson currently has majority of minus 45 in the House of Commons, so none of this legislation can actually be passed before a general election.

For this reason, as Robert Hazell of the Constitution Unit points out, UK prime ministers traditionally only call a Queen's speech directly after a general election once they have won a majority.

What Johnson is attempting is the complete opposite. In effect he is asking the Queen, not to set out his government's legislative agenda, but to set out the Conservative party's manifesto for a general election.

By timing the Queen's speech as he has, Johnson is, Hazell argues, asking the monarch to "make a Conservative party political broadcast."

As the Constitution Unit puts it, Johnson is planning to use the speech as a "trailer for the Conservative party's election manifesto.

Hazell adds: "if indeed the government hopes for an election and for there to be no coming session of parliament, then the Queen's Speech is a sham."