Here's how the locked-down Saudi Arabia-Qatar border became one of the tensest places on earth, sparking outrageous plans to build a 59-km-long canal and turn Qatar into an island In June 2017, Saudi Arabia cut all diplomatic and trade ties with its neighbor Qatar in dramatic circumstances, shunning the peninsula.

The Saudis, backed by six Gulf states who consider Saudi to be the regional hegemon, accused Qatar of supporting terrorists, and siding with Iran, Saudi Arabia's arch nemesis.

Qatar's only border, shared with Saudi Arabia, used to let in 40% of all Qatar's food imports. It was closed, and remains a ghost-town to this day.

The dispute hit new heights in late 2018, when Saudi Arabia said it planned to entirely sever Qatar from the mainland by digging a huge canal.

Here's what has happened, and what's likely to happen next.

The Qatari-Saudi land border has been closed for more than 2 years after a huge falling out between Qatar and the Saudi-led Gulf Cooperation Council (GCC). Here's why.

Qatar is a tiny peninsula, sharing its only land border with Saudi Arabia, the de-facto leader and hegemon of the seven Gulf states.

Iraq did not join the boycott, and continues to strengthen its political and financial relationship with Qatar.

The border, with Saudi Arabia's Rub al-Khali desert on one side, is just 41 miles(65 km) long. 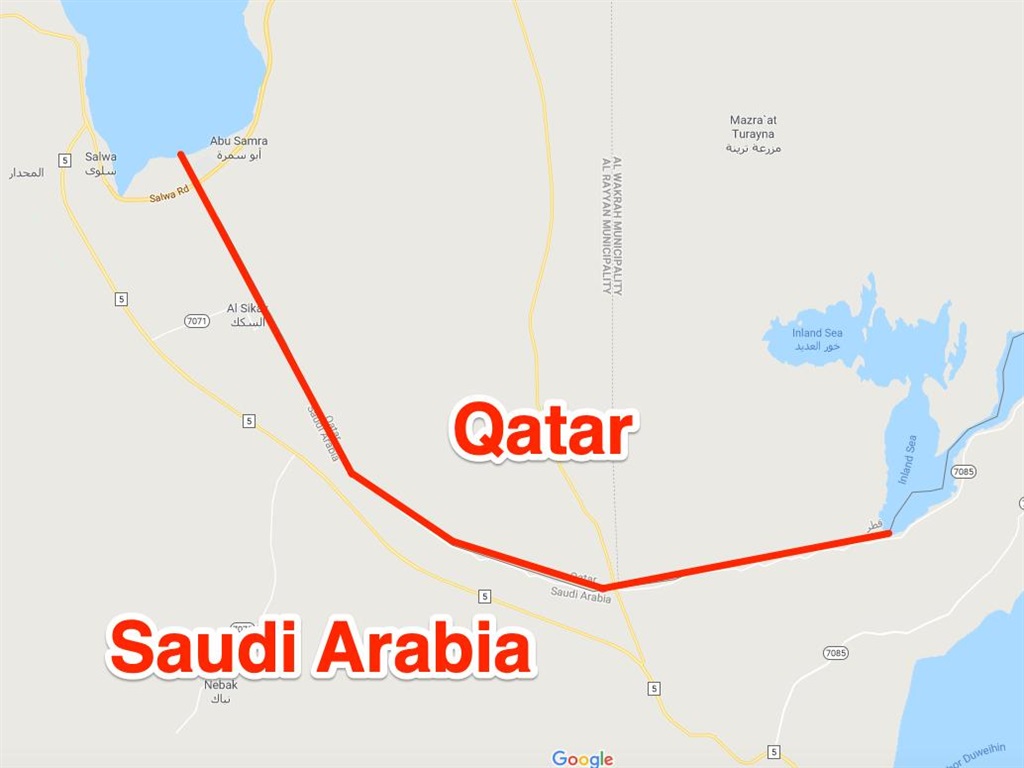 Until the blockade, the border processed 40% of Qatar's food imports. Since June 5, 2017, it's been closed, a result of the massive fallout between the Saudi-led GCC and Qatar. The spark which ignited the fallout was a comment allegedly made by Qatar Emir Sheikh Tamim cited in state media. It slammed Saudi Arabia, and praised their nemesis Iran.

"There is no reason behind Arabs' hostility to Iran and our [Qatar's] relationship with Israel is good," Sheikh Tamim was alleged to have said.

Qatar says the state media outlet was hacked by the UAE, and that Sheikh Tamim did not make the comments.

They deleted the statement immediately.

Fake comment or not, Saudi Arabia had long taken issue with Qatar's open support of the Muslim Brotherhood, an Islamist group, and of Iran, Saudi Arabia's nemesis.

Saudi Arabia accused Qatar of "grave violations being committed by the authorities in Doha over the past years in secret and public aiming at dividing internal Saudi ranks."

They also said Qatar was "adopting various terrorist and sectarian groups aimed at destabilizing the region including the Muslim Brotherhood Group, Daesh (ISIS), and Al-Qaeda."

Bahrain said Qatar was "shaking the security and stability of Bahrain and meddling in its affairs."

At the time Qatar said the boycott was "unjustified" and "based on claims and allegations that have no basis in fact."

Qatar says the Muslim Brotherhood is a moderate political movement that can help regional stability. Saudi Arabia named the Brotherhood an agent of terror in March 2014.

Qatar and Saudi have never been bosom friends. Qatar became so wealthy in the 1960s by utilizing its oil and gas reserves that it was able to distance itself from Riyadh and pursue its own agenda.

Despite their wealth, when the border was closed, Qataris panicked, prompting a mass rush on grocery stores amid fears of a food shortage. Qatar then doubled down on its shipping activity.

Thanks to the country's proximity to major shipping routes like the Strait of Hormuz Qatar's gas and oil trade has continued uninterrupted.

President Donald Trump has even weighed in on the rift, pointing the finger at Qatar for funding instability and terrorism in the region. Saudi Arabia has long been a key ally to the US in the Middle East, so Trump's support was unsurprising.

When the dispute reached its peak in 2017, Saudi Arabia, the UAE, and Bahrain gave Qatari visitors and expats just two weeks to leave, and forbid their citizens from entering Qatar. Qatar Airways, the national flag-carrier, was barred from using Saudi airspace, as were all flights in and out of Doha. As the issues worsened, the US and Kuwait unsuccessfully tried to convince the parties to make peace.

The US considers Saudi Arabia the key to counter-balancing Iran in the Middle East, and has tried hard, but so-far unsuccessfully, to sway Riyadh to end the Qatar blockade.

The US wants Qatar to be part of the proposed Middle East Strategic Alliance (MESA) - a multi-country effort to check Iranian power in the region.

Critics say MESA is a guise for the US to pull forces out of the area, without letting Iranian, Russian, or Chinese influence grow.

Progress seemed to have been made in Riyadh in October 2018, after Crown Prince Mohamed bin Salman praised Qatar at the Future Investment Initiative, known as "Davos in the Desert."

"Qatar, despite the differences we have, has a great economy and they will be doing a lot in the next five years," he said.

The feud impacted all Qataris — just before it was closed Saudi Arabia drove 12,000 Qatari camels and sheep back across the border. Hundreds of camels died of thirst in the process, al-Araby reported, and farmers were forced to pay up to QR3000 (R12,000) per camel," a source told The Peninsular.

Qatar is one of the world's richest countries, and confidently struck out on its own from the Gulf coalition orchestrated by Saudi Arabia against Iran. Qatar's wealth derives from the South Pars/North Dome Gas field — the world's largest — which it shares with Iran. The gas field is located in the Persian Gulf.

In June 2018, pro-government media reported Saudi Arabia was to turn Qatar into an island by digging a monstrous canal parallel to the border. The 37 mile-long (59km) and 200-meter-wide "Salwa Canal" would cut off the two nations, but part of Saudi Arabia would remain part of the newly created Qatari island.

The Saudi territory on the Qatari side of the canal will be used as a nuclear waste facility.

Some saw the move as an empty threat, but in August 2018 a senior government official confirmed the project, and expressed excitement over its potential.

Khashoggi, who was a staunch critic of the Saudi regime, was killed in the Saudi Arabian consulate in Istanbul, Turkey. It is widely believed in the West that his death was ordered from high up in the Saudi government, with the CIA concluding that Crown Prince Mohammed Bin Salman likely ordered the killing.

The US' position has changed throughout the conflict. After initially supporting Saudi action, Donald Trump has softened to Qatar.

In July 2019, during a White House visit from Sheikh Tamin, Trump thanked his "old friend" for Qatari investments and weapons purchases, which support the US economy.

Qatar had just signed off on $370 billion (R5.4 trillion) worth of investments with US companies.

Sheikh Tamim told Donald Trump at the signing: "We trust the economy here."

In May 2019, it looked like frosty relations could be thawing, after Qatar's prime minister attended an emergency Iran summit in Saudi Arabia.

Saudi Arabia's King Salman called the summit to discuss how the international community must use all means to confront Iran, but said Saudi Arabia wants peace.

No progress between Saudi Arabia and Qatar was made at the summit with Qatar's foreign minister, Sheikh Mohammed bin Abdulrahman Al Thani concluding: "The Gulf summit statement talked about a unified Gulf, but where is it amid the continuation of Qatar's blockade?"

No breakthrough has come, and tensions remain high.

Gulf analyst Dr Kristian Coates Ulrichsen, a fellow for the Middle East at the Baker Institute for Public Policy at Rice University in Houston, told Business Insider the tensions show no sign of abating.

"I don't see any imminent signs of a thaw in the blockade of Qatar by Saudi Arabia and the UAE."

"The Qatari Prime Minister's participation at the Mecca Summits in Saudi Arabia at the end of May did not lead to any breakthrough, as some beforehand had hoped it might."

"The leadership in Abu Dhabi remains resolutely opposed to any normalization of ties and easing of the blockade."