20 psychological tricks that will help you ace a job interview

That means they're susceptible to the same psychological preferences and cognitive biases that affect the rest of us. Simple tweaks to the way you speak and hold yourself can make you seem much more likable, competent, and hirable in their eyes.

With that in mind, we rounded up a list of easy strategies to forge a connection with your interviewer and boost your chances of landing the job. 1. Schedule your interview around 10:30AM on a Tuesday

So if the hiring manager offers you some flexibility in choosing an interview time, ask if you could come in around 10:30AM on a Tuesday. That's likely when your interviewer is relatively relaxed.

2. Don't interview on the same day as the strongest candidates

Research suggests that interviewers base their evaluations of individual candidates on who else they've interviewed that day.

One study, from researchers at the University of Pennsylvania and Harvard University, found that applicants who interviewed at the end of a day after a series of strong candidates were rated lower than expected. On the other hand, those who interviewed after a series of weak candidates were rated higher than expected. It's not clear whether this is an unconscious phenomenon, or whether interviewers are consciously rating the last candidates higher or lower than they should because they don't want their supervisors to think they're giving everyone the same ratings.

Either way, if you have any knowledge of who else is interviewing and when, choose to come in after comparatively unqualified candidates.

See also: The way you think about your job interview could be sabotaging your chances right from the start 3. Match the color of your outfit to the image you want to project

Meanwhile, 25% said orange is the worst color to wear, and suggests that the candidate is unprofessional.

Here's what other colors indicate: 4. Hold your palms open or steeple your hands

According to Molidor and Parus, your hand movements contribute to the impression you convey in a job interview.

Showing your palms generally indicates sincerity, while pressing the fingertips of your hands together to form a church steeple indicates confidence.

On the other hand, you don't want to hold your palms downward, which is a sign of dominance. You'll also want to avoid concealing your hands, which looks like you have something to hide; tapping your fingers, which shows impatience; folding your arms, which indicates disappointment; and overusing hand gestures, which can be distracting. 5. Find something in common with your interviewer

According to the "similarity-attraction hypothesis," we tend to like people who share similar attitudes. So if you know your interviewer really values community service and you do, too, try to work that topic into your conversation. The "chameleon effect" is a psychological phenomenon that describes how people tend to like each other more when they're exhibiting similar body language.

Body language expert Patti Wood says that, ideally, it should look like you're "dancing" with the other person. Otherwise it can seem like you're not interested in what they're saying, you're not a team player, or even that you're lying.

So if your interviewer is leaning forward in his chair and putting his hands on the table, feel free to do the same. Chances are he won't notice that you're copying him.

7. Compliment the interviewer and the organisation without self-promoting

In one study, led by researchers at the University of Washington and the University of Florida and cited on PsyBlog, researchers found that students who ingratiated themselves with their interviewers, without coming across as self-promotional, were more likely to be recommended for the job.

That's likely because those students seemed like a better fit for the company. Specifically, the students who ingratiated themselves praised the organization and indicated their enthusiasm for working there, and complimented the interviewer. They didn't play up the value of positive events they took credit for or take credit for positive events even if they weren't solely responsible. Success in business is often a matter of competing and cooperating, say Adam Galinsky and Maurice Schweitzer, the business professors who wrote the book "Friend and Foe."

You're confident in that you're taking the initiative to guide the conversation, but also deferential in that you're admiring your interviewer's work.

9. Be candid about your weaknesses

In answering the question "What's your greatest weakness?" your initial impulse might be to craft a strategic response that really emphasizes your strengths. For example, you might say, "I'm such a perfectionist" or "I work too hard."

But recent research from Harvard Business School suggests that "humblebragging," or boasting concealed by a complaint, can be a turnoff in interviews. It's wiser to say something genuine like, "I'm not always the best at staying organised," which sounds more honest, and could make your interviewer more inclined to recommend you for the position.

Interestingly, a 2016 study by a pair of Brown University researchers found that general bragging is more useful in certain contexts than in others. When you boast about how responsible you are, for example, and there's no evidence to suggest that you're not, you seem more competent.

If, however, your recommendation from your last manager indicates clearly that you're irresponsible, you'll seem less competent for having bragged. 10. Prime yourself to feel powerful

A growing body of research suggests that you can easily make yourself feel and appear more powerful in business situations. In one study, from New York University and Columbia University, participants who wrote about a time when they held power over other people were more likely to be cited as influential during a group-work task — and that impression remained even two days later. You can employ the same strategy in a job interview: Before you head in, jot down some notes about a time you acted like a leader at work.

If you want to sound smart, avoid speaking in monotone.

According to Leonard Mlodinow, author of "Subliminal: How Your Unconscious Mind Rules Your Behavior":

"If two speakers utter exactly the same words, but one speaks a little faster and louder and with fewer pauses and greater variation in volume, that speaker will be judged to be more energetic, knowledgeable, and intelligent.

"Expressive speech, with modulation in pitch and volume, and a minimum of noticeable pauses, boosts credibility and enhances the impression of intelligence."

Over at Inc., Geoffrey James suggests that you "slow down and speed up depending upon the importance of what you're communicating at the time. If you're summarising or going over background, speak more quickly than when you're providing new information. When you're introducing an important concept, slow down to give listeners time to absorb it." 12. Make eye contact when you first meet your interviewer

Don't be bashful — when your interviewer comes to greet you, look them in the eye. In one study, a pair of Northeastern University researchers asked participants to watch videos of strangers talking to each other for the first time and then rate how intelligent each person seemed. Results showed that the people who consistently made eye contact while speaking were considered more intelligent than those who didn't make eye contact. 13. Be friendly and assertive at the same time

One fascinating study, from the University of Guelph, in Canada, sought to address the reasons why candidates who seem anxious are less likely to land the job.

Turns out, at least in mock interviews, it's not nervous tics like fidgeting that hurt your chances. Rather, it could be that being anxious makes you seem less warm and assertive, and makes you speak slowly. "If you're not naturally extroverted, you need to make sure you sell your skills," study coauthor Deborah M. Powell told Forbes. "Don't be afraid to take ownership of your contribution to a project."

Powell told Forbes that slow talking hurt candidates' chances because interviewers may have assumed that the candidates were having a hard time answering their questions.

You might be tempted to tell your interviewer all about your past accomplishments — but research suggests you should focus more on what you could do in the future, if the organisation hires you.

According to social psychologist Heidi Halvorson, our brains pay more attention to uncertain information because they want to unlock it. That means we end up spending more time analysing that information and, if the information is positive, we're left with a more favorable view of a person's competence.

The Harvard Business Review spoke with John Lees, author of "The Interview Expert: How to Get the Job You Want" and he recommended that candidates prepare just as well for questions they'd rather not answer.

Here's a snippet from the HBR article:

"Let's say you were laid off. You can say something like: 'Like hundreds of other people, I lost my role when the company downsized. But that gave me a chance to look at the skills I've developed and identify new areas of growth.' Shift your answer from the past to the present and keep the conversation in a comfortable place." There's no need to scowl at your interviewer — but you'll also want to avoid keeping a giant grin plastered across your face. Research suggests that, for certain professions, smiling too much can undermine your success in a job interview.

In one study, from the Department of Veterans Affairs, Northeastern University, and the University of Lausanne, researchers asked college students to role-play job interviews. They found that students who played candidates for the position of newspaper reporter, manager, and research assistant were less likely to get the hypothetical job when they smiled — especially during the middle of the interviews.

Another part of the study found that people expect job candidates to smile more when they're applying for a position like consumer representative or salesperson. 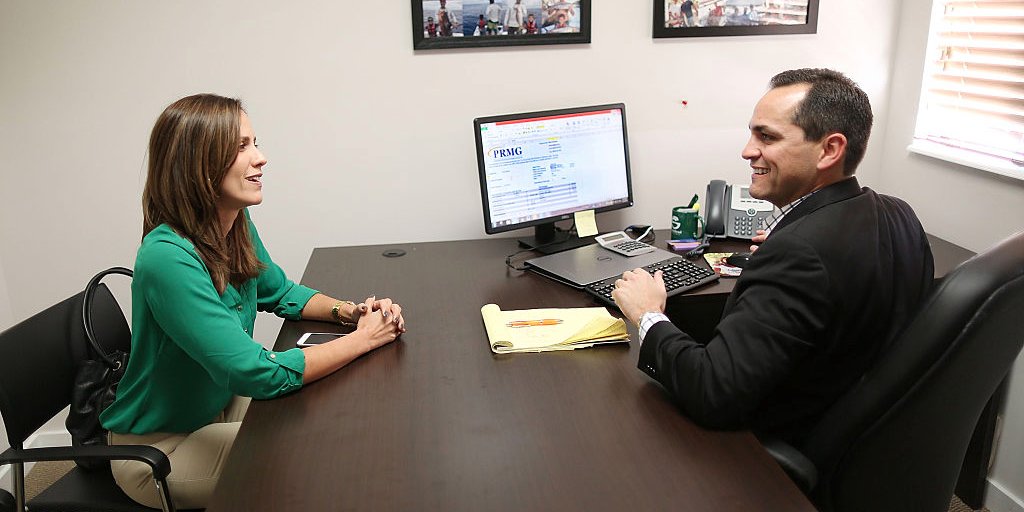 Recent research suggests that seemingly idle chitchat before the interview really gets started — what psychologists call "rapport building" — can make a big impact on the interviewer's impression of you. In the study, led by researchers at Georgia Institute of Technology, Texas A&M University, and Texas Christian University, candidates who did a good job making small talk in mock interviews received higher ratings on the job-related questions than candidates who were less adept at chit-chatting, meaning the interviewers' first impressions had colored their overall impressions. That's a suggestion from professors at the Ohio State University and the Kellogg School of Management. Writing in The Harvard Business Review, they say that the interviewer and the interviewee are often following "preprogrammed scripts," with both focusing on the candidate's resume.

That's why they advise candidates to pause after the interviewer asks a question, instead of launching into a rote response. They recommend that the candidate "listen for and reuse a few key words from the interviewer’s question in your own answer to signal that you’re building on the interviewer’s statement." The professors continue:

"One of our managers shared another technique he used to disrupt the script by stating, 'Let me tell you what’s not on my resume.' That got the interviewer’s attention, since the interviewer stopped mindlessly looking at the resume."

20. Ask the interviewer why they brought you in

"Why did you invite me to interview today?" might seem like a pretty weird question. But according to psychologist Robert Cialdini, it works. Specifically, it draws the interviewer's attention to your strengths and to the reasons they like you. "You will have focused those evaluators on the positive features, the strongest elements of your case," Cialdini told Business Insider. "With that in mind, they will now be in a mindset to see you in a positive light."