The many royals of Kensington Palace, and where they live. The arrows points towards Buckingham Palace, where Queen Elizabeth and Prince Philip live.
Samantha Lee/Business Insider
Prince Harry and Meghan Markle are reportedly about to move apartments within Kensington Palace, the royal residence they share with more than a dozen other major royals.

British newspaper The Sun reported that a year-long refurbishment of the 21-bedroom Apartment 1 is complete, noting that scaffolding around the buildings has been removed.

But they won't be moving far: Meghan and Harry had already been living in a cottage on the grounds, which is where Harry proposed just over a year ago.

The couple's new apartment would be directly next door to Prince William and Kate Middleton's home - they will even have adjoining doors so the family can stay close.

The palace, a royal residence since the 1600s, has seen a royal wedding and a royal birth this year -and there's another royal wedding to come, making it easily the most bustling of the royal family's many grand homes. Within its grounds are a host of separate properties, ranging from relatively humble cottages, to the grand 20-room apartment occupied by Prince William, Kate Middleton, and their young family.

As well as royal living quarters, which tend to be relatively sedately decorated, it is also home to lavish state rooms used for grand occasions, like this one: One of Kensington Palace's many grand interior rooms, which are occasionally opened to the public.
Getty Images

Here's a breakdown of who's who, and where they live in Kensington Palace:

William, Kate, and their children are not only the largest group of royals in Kensington Palace but the closest to the throne.

Perhaps unsurprisingly, they have the best rooms going. The family of five occupies Apartment 1A, a collection of 20 stately rooms with a commanding view of Hyde Park.

They moved to Kensington Palace full time in October 2013, not long after their first child, Prince George, was born. Princess Charlotte followed in 2015, and Prince Louis in April 2018.

The public rarely get to see inside, but photographers were allowed to take photos of a reception room when William and Kate hosted the Obamas in 2016: We also saw another view (or maybe even another room) where Prince George played on a rocking horse before meeting the US president. While they may be moving soon, until now Prince Harry and Meghan Markle have been living in a significantly less grand two-bed cottage.

They lived there before they got married on May 19, and came back two days after the ceremony to make it their marital home.

The cottage, nicknamed "Nott Cott" and often described as "snug," has been Harry's home since 2013.

Meghan moved in just after their engagement was made public in November 2017. Harry proposed to Meghan when they were spending an evening together at Nottingham Cottage, surprising her while they were roasting a chicken.

After announcing their engagement, they gave an interview from the cottage, sitting on its sofa, which is one of the only times the public has seen inside: Traditionally, royal couples have been given bigger residences after getting married, and Apartment 1 would be a step up for the pair.

The Duke of Gloucester, one of Queen Elizabeth II's cousins, and his wife, the Duchess of Gloucester, were the last to reside in Apartment 1. It isn't clear whether they moved out during the renovation work.

It is not clear if they continued to live in the apartment while renovations were underway. The Sun reported that the couple offered to vacate the property to make way for Prince Harry and Meghan Markle. The Duchess and Duke of Gloucester in 2016.
Getty Images

Like William and Kate's home at 1A, the dwelling is a large complex of rooms in the main palace building. The two used to be one enormous set of rooms until they were divided in the 1950s.

The complex has 21 rooms, slightly pipping the size of William and Kate's, but few details are available other than its overall size.

The newest royals at Kensington Palace are Princess Eugenie, who is William's and Harry's cousin, and her fiancé, Jack Brooksbank, a London socialite.

According to The Sun, the couple moved into a cottage right next to Harry and Meghan's about the same time Kate was in the hospital delivering Prince Louis. The couple announced their engagement in January, a few weeks after getting engaged while vacationing in Nicaragua.

They are getting married at Windsor Castle in the same chapel as Harry and Meghan on October 12, but the occasion is likely to attract much less publicity.

Prince Michael of Kent, another of the queen's cousins but from a more junior line, lives in the main palace building with his wife.

She is known as Princess Michael, in the old-fashioned tradition by which the wives of princes take their husband's name. 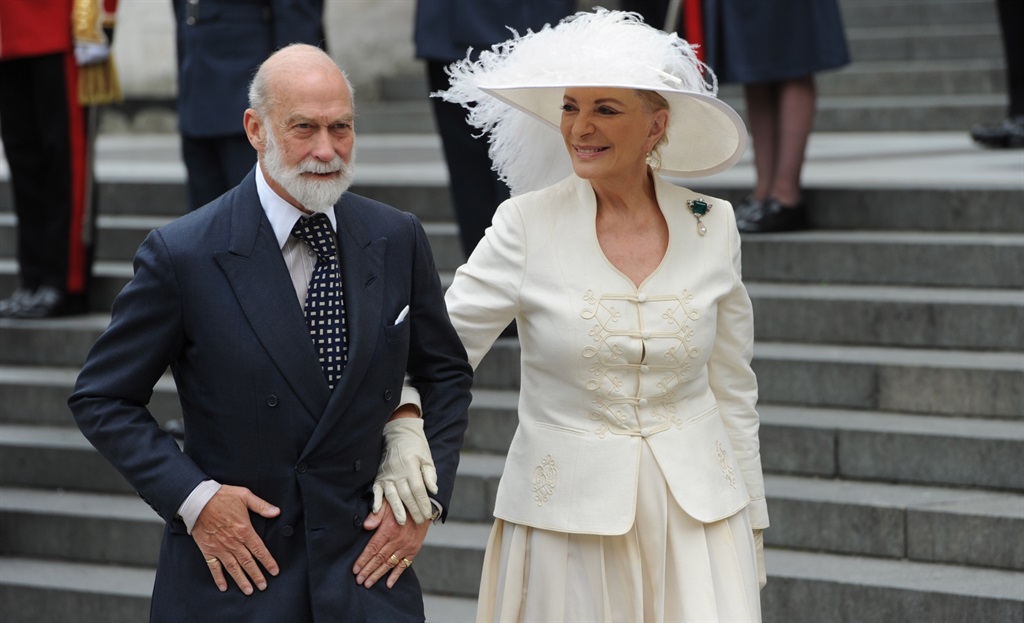 Prince and Princess Michael of Kent in 2016.
Getty Images

This same rule means that Kate can technically be referred to as Princess William of Cambridge, and Meghan as Princess Henry of Wales, but the names are not widely used.

The Duke and Duchess of Kent: Wren House

The Duke of Kent, Prince Michael's older brother, also lives in the Kensington Palace grounds with his wife, the Duchess.

Their home, Wren House, is named after the famous British architect Christopher Wren, who built St Paul's Cathedral and several properties for the royal household. The Duke and Duchess of Kent in 2014.
Getty Images

Few details about their home have ever been made public. It is physically between Ivy and Nottingham cottages and appears to be of a similar size.

What about the queen?

Queen Elizabeth II lives at Buckingham Palace with her husband, Prince Philip. It's about 2 miles from Kensington Palace, across Hyde Park and Green Park. It's not quite as cosy as living on the same property, but if Her Majesty ever wants to drop in on her cousins, grandchildren or great-grandchildren, they aren't far away.

Related Links
All the details you need to know about Princess Eugenie and Jack Brooksbank's royal wedding
The best photos from the British royal family's first-ever same-sex wedding
Queen Elizabeth is hiring a pastry chef — but you'll need a totally unrelated skill if you want...
Next on Business Insider
Sunflower and canola oil prices may decrease by 30% and 15% in the next two months